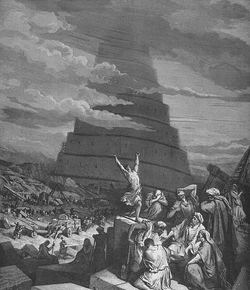 Now the whole world had one language and a common speech. As men moved eastward, they found a plain in Shinar and settled there.
They said to each other, "Come, let's make bricks and bake them thoroughly." They used brick instead of stone, and tar for mortar. Then they said, "Come, let us build ourselves a city, with a tower that reaches to the heavens, so that we may make a name for ourselves and not be scattered over the face of the whole earth."
But the LORD came down to see the city and the tower that the men were building. The LORD said, "If as one people speaking the same language they have begun to do this, then nothing they plan to do will be impossible for them. Come, let us go down and confuse their language so they will not understand each other."
So the LORD scattered them from there over all the earth, and they stopped building the city. That is why it was called Babel —because there the LORD confused the language of the whole world. From there the LORD scattered them over the face of the whole earth (genesis 11:1-9).

christy and i had a date night last night, celebrating two events: 1. her exodus from work, and 2. my birthday (this friday; #36). after pizza at world famous campisi's we went across the street to the angelika cinema to watch the much-acclaimed babel, or, as she called it, "the one with brad pitt." i had no idea what the film was about-- i am usually a cinematic risk-taker. all i knew was it was getting lots of oscar attention.

babel is one of those films that is told in a non-linear way, meaning things unfold in random ways, not necessarily chronologically. so the first and last scenes of the film involve the same phone conversation; at the beginning we hear it in one location; at the conclusion, we hear from the opposite end. all through we are given clues to the puzzles, and slowly-- and i mean slowly-- 2 1/2 hours of this movie in an over-heated auditorium after campisi's is alot to ask of anyone!-- things begin to take shape.

the big question that must be answered in any film, and this goes for preaching too, is: "so what? will anyone care?" i, unfortunately, did not. all through the movie i kept asking myself, "what is going on here? what am i supposed to be learning again?" as frustrated as i was-- and my frustration included many plot elements that i will not speak about here-- i must say the performances, especially rinko kikuchi, were brilliant. too bad the material did not match up.

the tag line for babel is "If You Want to be Understood...Listen ." the obvious biblical reference i quoted above, the tower of babel episode. there's another biblical allusion, by the way, to the hagar story, but i won't give it away (genesis 21:14-21). we learn from the genesis story that even after adam and eve's expulsion from the garden, cain's murder of abel, and the flood that destroyed every family save one, humanity hasn't evolved much. people, having a common language at the time, wanted "to make a name for themselves," and built a tower tall enough to reach heaven. this would prove to God our own superiority. God was not impressed. and as punishment they were forced to speak in different languages.

the theme of this babel is lack of communication too. no one can or will listen to each other. this is best portrayed by rinko kikuchi, whose character is deaf/mute. she lives in tokyo, one of the world's largest cities, and cannot hear the rush of traffic, the sound of music, or the teases of teenage boys. there is an visually amazing sequence in a nightclub that i will never forget. this painful reality, coupled with a tragedy in her life, leads her to make very poor decisions, longing for attention from others. the other characters in the film, in various locations and situations, also suffer from a profound lack of communication. and of course their situations go from bad to worse.

i don't know how babel will do on oscar night-- as great as rinko was it'll be hard to root against jennifer hudson from dreamgirls-- but who knows. maybe the academy will send a strong message, that great visuals and better performances count enough to win. if so, will we listen?
Email Post

I just wanted to say FIRST off HAPPY BIRTHDAY! Hope you have a great one!!!!! Second off I want to let you know that you and your family are in my prayers right now. I just returned from a brief trip to Dallas where i found out you were to be moved. (My life has been rather hectic lately and thus I haven't been reading your blog, SORRY) So just know that there are some prayers being thrown up your way up here in CHILLY Pittsburgh!
00:48

Anonymous said…
You should right for a magazine. In your spare time, of course!

Sent you a birthday greeting on the night of your birthday from me and Richard, but it kept getting kicked back. So, happy belated!

Anonymous said…
This comment has been removed by a blog administrator.
16:08