you can go home again

(yes, i am sitting in my parents' home in bay city, but no, that's not what the title refers to.)
yesterday dad and i drove in to houston for a double feature at the cinema and dinner. we saw th

e dark knight (my 3rd time) and the x-files. yes, the dark knight is every bit as good as everyone says, and better. usually when everyone loves someone or something i don't, mostly out of (self) righteous indignation. i never saw home alone in the 80s; i have never seen american idol. but as for the dark knight, well, it's special. not since pulp fiction have i seen a movie three times in one week.

the x files (2008), on the other hand, is not so special. i wish i could claim to be one of those geeks plugged in to mulder and scully from episode 1, but i am not. it was only after it began to be noticed by a wider audience that i became a fan. it was still on friday nights, so i got hooked early. right about the time christy and i started dating, the fall of 1995. i was a committed viewer until duchovny dropped out. they should have cancelled the series then, but made the mistake to press on. without the chemistry of mulder and scully, it was not the x files.

the first x files movie (1998), was directly linked to the end of one season and beginning of the next. the new film has little to do with the series. a few references to old cases here and there, but one certainly does not have to know anything of the tv show to stay on top of the story. this issue hurt the first film's popularity. this year there will be two major hurdles for the x files: it's been eight years since there was a decent episode, and people forget things quickly; and batman is simply destroying everything else.
the story of the film is very straightforward. no aliens, no conspiracies, no smoking man. a man claiming to be a psychic appears the only resource the fbi can use when one of its agents goes missing. he seems to help them out, but they are skeptical-- he must be involved. to verify his authenticity, they call mulder and scully in to help. there are no special effects, no explosions, no typical summer fare. difficult ethical decisions are discussed smartly. there is conflict on many levels. 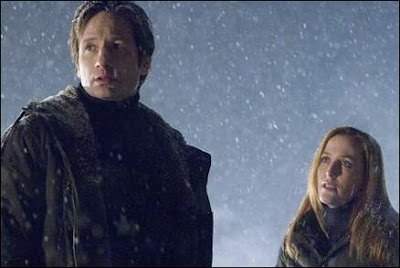 what makes the film work is chemistry. listen, i am no roger ebert. i am not a film critic. but what made the series work so well was the complicated relationship between scully and mulder. they loved each other, they were loyal to each other, they took great risks for each other. and what amazed me watching the film is that 15 years after show first appeared that chemistry is still there-- it is real. duchovny and anderson look different now than they did in 1993. older, lines deeper, whatever. but the relationship between them is just as strong.
when i say "you can go home again," i refer to those relationships that somehow remain strong despite great distances-- miles, years, even life and death. much of who we are is determined by those relationships, and without them our lives are not so whole. God calls us to be good stewards of the things we have been given-- money, time, spiritual gifts, and yes, relationships. may each of us be aware of how important those relationships are, and do whatever we can to nurture them. the results could be very special-- and lasting.
Email Post