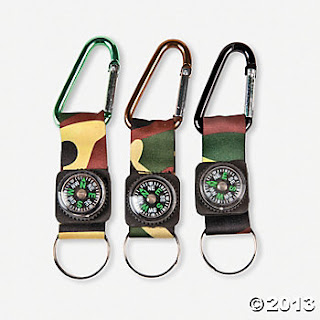 This week has been a busy one in the Drenner household: Christy was in Orlando on a business trip for five days, Miles and Linus have participated in Cub Scout Twilight Camp (so called because it runs from 4:00-8:30 p.m. only, not a sleepaway camp), and all three boys have participated in Vacation Bible School at University Park UMC (thanks for the hospitality, friends!). Somewhere along the way-- I think it was one of Christy's little surprises she brought back from Florida-- Linus (5) secured a small compass. Miles had one too from scout camp. So on the way to VBS this morning Linus kept saying, "We're going North! Now we're going South! Now we're going West! Now we're going North/South!" From the third row Miles (8) would respond, "No, we're going West. No, we're still going West. No, now we're going South." Then Linus realized he could not find the little bubble that actually marked the direction on the compass. I tried to find it. I failed as well. I guess that means we're doomed if we ever get lost.

After dropping the boys off at UP, I came to my office for my daily devotional. The assigned text from today came from Deuteronomy 29, one of the final few chapters of the journey to the Promised Land after God liberated the Hebrews from slavery in Egypt. It's been a rough ride, but God has been faithful: "I've led you in the wilderness forty years now; neither the clothes on your back nor the sandals on your feet have worn out" (Deuteronomy 29:5). Forty years. Both Exodus and Deuteronomy tell us the Hebrew people were stubborn, unfaithful, disruptive, and disrespectful of authority (God's, as well as Moses and Aaron). Their apostasy has led to their loss of direction. In other words, their moral compass is about as effective as Linus' toy compass.

The other text in the devotional this morning was the testimony of Stephen (Acts 7:44-8:1). Stephen's moral compass is centered on Christ-- and as a result he has clarity to deliver a prophetic message his audience does not want to hear. This results in his death, but even as he dies his compass is still pointed to the bright and morning star, Jesus Christ (2 Peter 1:19, Revelation 22:16).

At the end of the Deuteronomy text God is ready to, once again, make a covenant with the Hebrew people-- a covenant they have broken many times, and will do so again. God says, "I am making this covenant, sworn by an oath, not only with you who stand with us today... but also with those who are not with us today" (verses 14 & 15). That "not with us today" includes folk like Stephen, you, and me. People who are willing to be diligent (verse 9) in their relationship with God-- "...the Lord will make you his own people right now-- he will be your God just as he promised you..." (verse 13).

Each of us has an invitation today to be part of that covenant relationship with God. We may not have the faith of Stephen immediately-- and we may never fully get there-- but that's not really the issue. God doesn't want you to be another Stephen-- God wants you to be your best you. God says to the Hebrews: "I have led you..." Know that God's grace, prevenient (going before you, leading you), justifying (saving you) sanctifying (perfecting you in love) is as much at work in your life as Stephen and every other great person of faith you have encountered. Throw out the toy compasses-- whatever form they are-- and embrace God's leadership in your life. Set your mind/heart/soul on the bright and morning star, Jesus Christ, and let him be your compass.
Email Post