Cliches are so Cliche 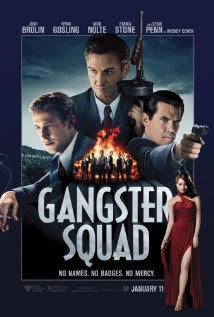 The other night Christy and I watched Gangster Squad, which was so disappointing. I mean, look at this cast: Ryan Gosling, Sean Penn, Emma Stone, Josh Brolin, and the always lovable Jon Polito... and so many others! The cast was great (well, Sean Penn was really over the top playing Mickey Cohen) and the film looks stunning-- spectacular work by cinematographer Dion Beebe. Its over-violent in several places-- gratuitously so. It's biggest weakness was in the direction and writing. I mean, I have seen a ton of gangster movies-- one of my favorite genres-- but this one is filled with cliches that ruin it.

Example #1: One of the main sets is one of those typical '40s era night clubs where everyone would dress in their finest and there would be a live singer or comedian-- dinner and a show in the same place. The movie comes back to this same place over and over-- then one of the performers is a Carmen Miranda wannabe-- fruit on the head included of course. Really?

Example #2: Near the end of the film there is a shootout in a hotel lobby. It's set at Christmas time and there is a giant tree with ornaments and lights, and a table filled with decorative presents. With all the shooting back and forth, the thing explodes. Really. I know trees are flammable, but an explosion? And some of the bad guys walk down enormously wide stairs-- good guys at the bottom-- a la The Untouchables at the train station. I swear I expected a baby carriage to roll down in the middle of the gunfight.

It's one thing to honor the great LA post-WWII movie tradition-- starts and ends with Chinatown in my opinion, but LA Confidential is also great. It's another thing to exploit our love of the genre with retreaded ideas and plots. I am sure those guys jumped at the chance to wear a fedora and wingtips-- who wouldn't-- and Emma Stone looks every bit the LA glamour of the era. Must have been fun for all of them in wardrobe. But let's have more substance next time. Put this front of the camera talent in the hands of better behind the camera talent and we'll have something to build on.

Just this morning on Twitter I saw this note from Uberfacts: the ideas for the great Pixar films A Bugs Life, Monsters Inc., Finding Nemo, and Wall-E came out of a single lunch meeting. I've always had tremendous respect for the team at Pixar-- storytelling, creativity, animation skills, and especially, vision. Think about that lunch meeting that must have happened in the mid '90s. Those movies came out in 1998, 2001, 2003, and 2008. The fully realized vision took probably 15 years to cultivate. And every one of those movies is excellent.

I don't know anything about Gangster Squad's timeline, but I wonder if the studio rushed it-- sort of threw it together to take advantage of the rising stars of Emma Stone and Ryan Gosling. The studio would probably argue the movie was a success-- out of nearly 88,000 votes on imdb.com rated it a 6.8 out of 10, which is high-- I might go 6.0. the Tomatometer rating of 32% is pretty rotten, but it did make nearly $50 million at the box office. Not sure how successful a formula that translates to.

Then I started thinking about churches. How much of what we offer (sermons, curriculum (ugh), worship services, etc.) is really a cliche? Everyone loves familiarity because it creates warm feelings of home. But each church is different. Each parish is different. Each Sunday ought to be different. Let's be thoughtful and deliberate in our approach. Let's slowly, carefully, mold vision to make sure the end product is its absolute best-- meaning it brings God glory and brings others closer to Christ. That could be a building, a sermon series, a Sunday school curriculum. Let's be at our best. We are gifted and skilled-- called to great work. I am fortunate to be part of a team here at Custer Road that puts together incredible stuff, and as I have walked through the hallways getting to know folk the last couple of weeks I am so thankful for these partners in ministry.

Jesus told a couple of parables about kingdom building, one of which is probably more familiar than the other: "The kingdom of heaven is like a mustard seed that someone took and planted in a garden. It grew and developed into a tree and the birds in the sky nested in its branches" (that's the familiar one-- Luke 13:18-19). But check this out: "[It's] also like yeast, which a woman took and hid in a bushel of wheat flour until the yeast had worked its way through the whole" (Luke 13:20-21). The first parable is about humble beginnings and simplicity; the second one is about extravagance and multiplication. The woman tried to hide the yeast in a ton of dough-- but it still did its work-- producing enough to feed an enormous amount of people! May it be so with your ministry, wherever you find yourself: lay or clergy, staff or volunteer, rushed or patient. May God's vision for your ministry-- our common ministry-- grow into such a unique, cliche-less bounty that more and more folk are fed with the Bread of Heaven!
Email Post