Warning: there may be spoilers here, depending on how you define "spoiler." The movie opens December 25, but the book has been out for several years. I will not divulge any secrets of the movie (there really aren't any), but I will highlight important differences from the Laura Hillenbrand book, as well as overall impressions of the film.

Another note: sometimes at advance screenings viewers are forbidden to post their reactions before the release date. Aside from "keep your mobile phone in your pocket," no such admonitions were given. 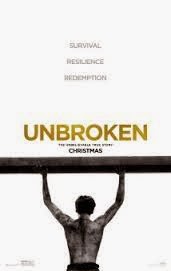 The other night I was invited to attend a special screening for the new Angelina Jolie directed film Unbroken (I also learned from the end credits that Joel and Ethan Coen wrote the script, with others-- this was a surprise. I am huge fans of those guys). Let me say from the beginning this is one of the best books I have ever written-- I know that is a cliche, but here it is true. It is a thrilling, nearly unbelievable true story of Louis Zamperini, American Olympic athlete and war hero. 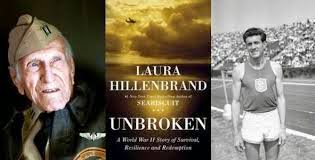 The film did not live to the expectations or hype. Here's my prediction: those who have not read the book will universally love it, despite lukewarm reviews. The auditorium applauded at the end of the movie. Those who have read and loved the book will be disappointed, because, at least from my point of view, it leaves out the most important part of his life: his faith, and the impact it had on him and many others. The movie is being marketed amongst Christians as a testimony to Zamperini's faith (the company screening the movie even offers pastors sermon notes and study guides for the films it presents-- although I have not yet received them), but aside from a couple of references there is very little.

The first time we see a reference to faith is in a church service, where the pastor preached a sermon on forgiveness. Later his mother prays for her bored, troublesome teenager. During the war Zamperini was the bombardier on a flight crew. Following the crash of his plane after flying a mission, Zamperini sees the pilot praying a silently. The two exchange some sarcastic words. The big moment of faith-- and it is only that, a moment-- follows another crash. The crew was sent on a rescue mission, and the plane crashes into the sea, killing all but three crew members. After several days the three survivors face giant waves during a storm, and looking to the sky, Zamperini prays, "If you get me through this I will serve you for the rest of my life." I remember this distinctly from the book. They survive the storm. After more than 40 days adrift they are captured by a Japanese ship and spend the rest of the war separately in POW camps in Japan. Zamperini is especially tormented by a sadistic man the prisoners called The Bird. Upon his return to the USA his family greets him at the airport and the movie is over, save for a few sentences before the credits, like (paraphrased):


"Louis kept his promise and lived out his faith for the rest of his life."

"Louis was able to overcome his bitterness and forgive."

But we don't see this in the movie.

Ever heard this?: "Go to the graveyard and look at the tombstones. You'll see the birth year and the year of death, and the dash inbetween. The dash is where you live your life." Here you go. Louis Zamperini lived 1917-2014 (died July 2), meaning his dash should encompass 97 1/2 years. In the movie we only know him briefly as a kid and during his 20s. What about the last 70 years of his life? What makes the Zamperini story so incredibly special is how his faith impacted those years. His faith was born in the ocean on a raft waiting to be rescued. But after the war he was troubled for years by nightmares about The Bird, which resulted in alcoholism, and nearly destroyed his faith. He reluctantly attended a Billy Graham tent revival in Los Angeles in 1949. There his faith was renewed and he was transformed.

Louis Zamperini's Christian faith empowered him to overcome bitterness and forgive his captors: "Surely it was for my welfare that I had great bitterness; but you have held back my life from the pit of destruction, for you have cast all my sins behind your back" (Isaiah 38:17). "Forgive each other; as the Lord has forgive you, so you must also forgive others" (Colossians 3:17). This is what is missing from the movie-- Zamperini was not "unbroken" because he overcame his physical and emotional suffering during the war, as awful as that was. He was "unbroken" because he overcame the resulting spiritual brokenness and was not defined by it.

One of the great cliches around the church is that preaching on Easter and Christmas is the easiest-- the stories preach themselves. And this man's life, even the first 30 years of it, is enough story telling in anyone's hands. This was Angelina Jolie's first major film as director, and it shows. The script from the normally funny and sophisticated Coen brothers was very disappointing-- none of their characteristic wit or irony. When I first saw the trailer months ago I thought it was destined for award nominations, but no: it was shut out from the Golden Globes, and Oscar will probably pass too. You'll hear the word "snubbed," but the truth is: it's just not good enough for awards. On its own, does the movie work? Sure. Like I said, those who have neither read the book nor are particularly interested in the remaining years of Zamperini's life will enjoy it.
Email Post