Sicario and the Fear We Must Endure 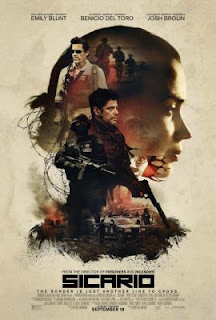 Last weekend the boys and I went to Bay City for a few days. The visit included a band competition for one of my nephews, lunch and memories shared with my grandparents, worship in a different tradition than the United Methodist Church, two trips to the famed donut shop, and several pounds of shrimp fried in my dad's shack in the backyard.

And I saw Sicario with Dad.

This, along with The Martian, which I reviewed last week, is one of the best movies of 2015. Unlike The Martian, this movie has no humor and offers no optimism for the future. Set in the middle of the War on Drugs, Sicario grabs each of us and opens our eyes to the cruelty and brutality at work in many of our communities-- north and south of the US/Mexico border. The performances, the direction, even the look of the movie are all A+. This does not mean it is an enjoyable experience. Sicario is heart-wrenching.

Emily Blunt is the star of the movie, but really she is a sideline character. The movie is presented through her eyes and experiences as she is a member of a team, along with Josh Brolin and the great Benicio Del Toro, that operates secretly to disrupt the pattern of violence and the flow of money tied to drugs. The word sicario in Mexico means "hitman."

The movie looks amazing. It is shot in a way that portrays isolation and dread. When the three characters board a plane to fly to Juarez, we see the small shadow of the plane on the mountains as they pass, making us feel that their mission is irrelevant and pointless. That is certainly how Blunt's character is made to feel by her team as the movie goes on. She is simply there for the ride, but cannot jump off of the merry go round when it stops.

I am neither a policy wonk nor a sociologist, but by almost any measure the War on Drugs has been a failure for everyone. Trillions of dollars have been spent, countless lives lost, entire countries have suffered instability. Many of the migrants coming to the USA from Central America are not looking for work, but for safety. The lives of their children are no longer safe in their home countries, so they seek shelter here. It is one of the great injustices of our time that we have characterized immigrants with such broad strokes. Closer to home, the War on Drugs has destabilized our own country. One of its byproducts were so called "mandatory minimums," where repeat offenders faced long prison sentences for the most petty of crimes. On one issue many politicians agree, regardless of party: the US prison population is the largest in the world and is out of control.

What Sicario really wants us to think about is: how far would we go to achieve our goals? There are no good guys/bad guys in this movie-- no black and white. Even the folk you are rooting for take actions the most ardent atheist would consider morally questionable. How much distance is necessary between hero and enemy to keep the roles distinct? In this movie that distance is, sometimes literally, inches.

I know good things, and good people, live in Juarez, even when the news media mostly reports only distorted views of life there. In fact, our church just last week sent a team to Juarez to build a house for a family. I look forward to hearing those positive, life-affirming stories of spreading God's love. In the movie we get a glimpse into the life of one family living in Juarez, and the scene of a child staring at an empty bed is one of the most startling, painful images I have seen on film.

As I watched the movie, I could not help but feel a profound sense of fear and dread. We lock our doors at night, we try to raise our kids in safe schools and neighborhoods, but the reality is: there is only so much we can do. I kept thinking: "Where could I move to assure my kids' safety?" "How do families in unsafe communities endure?" I left the auditorium nearly speechless. Dad wanted to know my thoughts on the movie, but words just couldn't exit my mouth. All I could say is, "We live in a broken world."

Talking later that night with my Aunt Pam, she mentioned that she and Uncle Danny had seen The Intern earlier (Christy also saw it up here too; I have not seen it). She enjoyed the good feelings it generated. She said she couldn't deal with the feelings a Sicario would create. And she is right. I struggled with it, and still do several days later. It's a great, painful, scary, violent, thought provoking film-- not to be taken lightly. And it knows how serious these issues are. Now we are left to address them. What decisions can we make to turn the tide of drug abuse, the culture of death and violence, the mass incarceration, the compromises of our highest ideals we sometimes make to win?
Email Post