God's Politics-- a Study for Lent 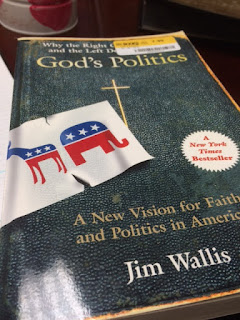 In case you haven’t noticed, 2016 is an election year. To illustrate how long our electoral process takes, several Republicans and Democrats quit the race for the White House more than a year before the election! It makes my head hurt. Any observer of our process, from the most plugged in political junkie to the one who votes only out of a sense of civic duty, would say our system is broken, if not toxic. And things only get more complicated when faith enters the equation.

But what if there was another way? What if we could learn to approach politics from a Christian, rather than a political, perspective? When I wrote my doctoral thesis several years ago, I focused on preaching on “hot button issues.” One of the best resources I incorporated was God’s Politics by Jim Wallis. In a non-threatening, non-hostile way, Wallis explores the relationship between politics and Christian faith, and I’d like to invite you join in the discussion during the Season of Lent.

“Sounds great,” you may say, “But what does it have to do with Lent?” Well, Lent is a 40-day time of spiritual preparation for the coming of Easter. Approaching politics specifically, and more generally the world in which we live, from an informed, Christian perspective is a spiritual discipline. A standard not easily met by CNN, Fox News, MSNBC, or whatever other news outlet available to us. Plus, the book addresses specific issues that have a spiritual element embedded to them: war, poverty, the environment, among others.

So I invite you to join me for a grown-up, mature exploration of the complicated relationship between religion and politics. It’s a free class, but you’ll need to bring a Bible and a copy of the book. You can pick up God’s Politics on the cheap anywhere-- I bought a large type paperback at Half Price for $8; others downloaded a digital copy for $2. We’ll meet Wednesday evenings during Lent, beginning February 10, 7:15-8:45 p.m. Our study will follow the weekly Lenten worship services in the Chapel.