When I was in seminary I took a part-time job at a brand new cinema at Cityplace in Dallas. It's now a gym or a Kroger or something, but then it was a Sony Theatre, which became Loews, which became AMC. Wasn't it beautiful? 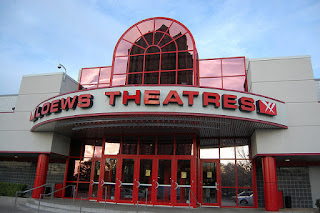 Christy even showed up one night with her Dad when we were first dating. You're shoveling popcorn one moment, and then your beautiful girlfriend's Dad is looking back at you. Yikes. Anyway, at Christmas they would play "holiday" music-- you know, the secular stuff, not the religious. Being a Sony cinema, their featured artist that year was Mariah Carey, singing All I Want for Christmas Is You. It's a catchy song, but hearing it over and over again until 3:00 a.m., covered in popcorn oil, the bottoms of my shoes sticking to the floor after spilt soda..

Yesterday driving through Dallas I heard another popular "holiday" song, though it's more of a borderline religious song: Mary Did You Know? This version was by Pentatonix, and it's great. Check it out:

It's a good song, and it features Mary, the mother of Jesus. It wonders if she knew all the details of his life, like walking on water. Did she know about his true identity: the great I AM (God's name in the Bible). Here's the thing about this song, and why I still consider it a "holiday" song: the answer is YES. She did know. I'm driving my car, digging the music, but after every question I am answering: YES! She knew! Check out Luke Chapters 1 & 2. She knew!

The angel appears to her and says, "He will be great and will be called Son of the Most High. The Lord God will give him the throne of his ancestor David... the child will be holy and called Son of God" (1:32, 36). She knew. When she visited Elizabeth, her relative says, "Of all women you are the most blessed, and blessed is the fruit of your womb. Why should I be honored with a visit from the mother of my Lord?" (1:43). Mary knew! Elizabeth too!

The shepherds visited Mary, Joseph, and the baby at his birth, and shared what they heard from the angelic chorus (2:18). What had they heard? "Today in the town of David a Savior has been born to you; he is Christ the Lord" (2:11). Everyone else at the manger was astonished (2:18), except Mary-- because she knew. Eight days later the Holy Family presented Jesus for his dedication in the Temple. An elderly man Simeon was there, and seeing the child he proclaimed, "My eyes have seen the salvation [God has] made ready in the sight of the nations..." (2:30). Then to Mary Simeon said, "Look, he is destined for the fall and rise of many in Israel, destined to be a sign that is opposed-- and a sword will pierce your soul too (3:35). Yes, she knew everything. Anna, a prophetess in the Temple, also saw Jesus that day, "...and spoke of the child to all who looked forward to deliverance of Jerusalem" (3:38).

When Jesus was twelve they returned to the Temple in Jerusalem. They became separated, and after a couple of worrying days they found the adolescent Jesus teaching the elders in the Temple. After his parents scolded him, Jesus said, "Where else would I be? Did you not know that I must be in my Father's house?" (2:50). Luke does tell us that they didn't understand at the moment; but it's fair to say she knew.

Mary knew everything about Jesus-- and probably more than what is recorded in the New Testament. A couple of times Luke even says Mary "treasured" these things-- and probably more she witnessed and heard-- in her heart (2:19, 51). The Church has taught that Mary was Jesus' first disciple. She was the first to say yes to the invitation to participate in the new phase of God's plan for salvation. She followed Jesus throughout his life and was present at his cross when he died-- when the other "traditional" disciples had fled out of fear and doubt.

I love what Joyce Hollyday says about Mary:


Long before anyone else understood-- while Jesus was sill in her womb-- Mary knew what his birth would be about. God had entrusted her with the message of the radical social upheaval that was to come, when the rich and the powerful would be put off their thrones, the poor would be uplifted, and the hungry would be fed. It had already come true in her. She was a poor Jewish woman, a victim of oppression by class, race, and gender. You could not get much lower in those days than to be a woman in a patriarchal society, a Jew under Roman occupation, and a peasant in a land of plenty. But Mary was the chosen vessel of God's incarnation; God's promises had already become truth in her flesh." -- Clothed with the Sun, 1994

So when you hear that song over the next week or so, answer YES to every question. Mary knew. Here's the big question: Do we know? And if not, are we ready to hear? Ten days and counting...

But of course now I have that Mariah Carey song in my head... again!