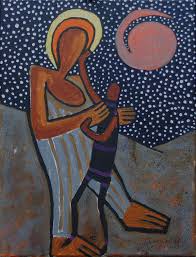 Impulsive. Acting before thinking. He had run away from home, burning every bridge in the process. Now, some time later, he was desperate and had nowhere else to go. So he started the journey home. Along the way, he practiced a speech he would offer to any family member he encountered: "I have sinned against God and you. I have nowhere else to go. Let me be your servant, that I may live another day." The story of the Prodigal Son found in Luke 15 sounds eerily similar to the encounter between Jacob and Esau after being separated for twenty years. Jacob is literally the younger brother; Esau is the father figure. Jacob is scared and unsure about the future; Esau celebrates the return of one he thought was dead and lost.

The night before the family reunion, Jacob struggled. He heard from his servants that Esau was coming at him with 400 men. He orders his servants to deliver hundreds of sheep and cattle to Esau as a gift-- more like a bribe-- to earn Esau's forgiveness. He feared for his life. He led his family across the river that was a boundary between his home place and that of his Uncle Laban. Jacob left there in a hurry, only to run into his wrathful brother. He has nowhere else to go. He had to confront the past. After his family cross the river, he was left alone. In his most desperate hour, he remembers the encounter with God in the middle of nowhere, when God promised to be with him, wherever he journeyed. So he prays:


And Jacob said, ‘O God of my father Abraham and God of my father Isaac, O Lord who said to me, “Return to your country and to your kindred, and I will do you good”, I am not worthy of the least of all the steadfast love and all the faithfulness that you have shown to your servant, for with only my staff I crossed this Jordan; and now I have become two companies. Deliver me, please, from the hand of my brother, from the hand of Esau, for I am afraid of him; he may come and kill us all, the mothers with the children. Yet you have said, “I will surely do you good, and make your offspring as the sand of the sea, which cannot be counted because of their number.” ’

A stranger walks past. A similar thing had happened to his grandparents in Genesis 18, but unlike Abraham and Sarah, Jacob offers no hospitality. Instead, Jacob being Jacob, he fights with the stranger all night. As dawn breaks, the stranger demands to be set free, but Jacob demands to know the stranger's name. Instead the stranger, now identified as God, changes Jacob's name to Israel. He was once Jacob, the grabber; now he is Israel, the one who struggles with God.

The stranger leaves, and Jacob/Israel is once again alone. He finds his family and does a very Jacob thing: he divides them up. He is so certain Esau is going to kill all of them that he want to give the woman he loves, Rachel, and the son she has given him-- his favorite son Joseph-- the best chance to survive. So following Jacob are: his concubines, the servants of his wives and their four boys. A short distance later is Leah and her seven kids. Then there is Rachel and Joseph. He has done all the planning and scheming he can. Here comes Esau. But instead of hate and violence, Jacob encounters love, forgiveness, and mercy.

The two brothers embrace and shed many tears. Esau wants to know all his brother's family, so he meets all of the wives, the nephews, and his niece Dinah. It is a powerful scene of joy and reconciliation, at least on the part of Esau. Jacob sort of takes it in, but he is not invested emotionally. Other than his mother Rebekah, now dead, his wife Rachel and favorite son Joseph, Jacob has no real emotional connection to anyone. As much as Esau has endured on the part of his twin brother, somehow he has overcome it. He is not defined by bitterness and vengeance. Jacob cannot let go of the past. He knows he will spend the rest of his life looking over his shoulder, certain his brother will one day kill him.

So when Esau begs Jacob and his family to come home with him, to raise their kids together as one family, Jacob politely declines. "It'll take too long; we're slow with all these kids and animals!" Esau offers for some of his servants to help. "No thanks, we'll catch up later once we settle." Esau reluctantly leaves. Jacob never settles with Esau. They never have family reunions or Thanksgiving dinners together. The only time they meet up again is to bury their father Isaac at the end of Chapter 35. Just before that Jacob's true love Rachel died in childbirth, giving Jacob his 12th son, Benjamin.

The Prodigal Son story is powerful because of the graciousness of the father-- who we identify as God. Esau embodies that same forgiveness and graciousness in the reunion with Jacob, but unlike the son in the parable, Jacob will not accept the possibility of a new future together. He may not even be capable of such commitment. But even in the midst of the brokenness of the main character, one who is known for grabbing from others and struggling with God, the grace and mercy of God are evident.

Forgiveness is hard work. It is emotionally mature work that is only possible because of God's grace. Who do you need to forgive in order to embrace a new future free of the burden of guilt or brokenness? Know that whatever you are afraid of, whatever burdens you carry, that God hears those and knows them. And that God knows you. God knows Jacob and all of his "stuff" so well and intimately that God renames him Israel as a sign of the Promise and the covenant fulfilled. Who else but God can accept us as we are, and yet offer a better, healthier future? God forgives and renames. Esau embodies God's love and grace. But there is another factor in the equation. To achieve wholeness, the offer must be accepted. Jacob refuses, unable to leave the past behind. What about us?

The the father in Luke 15, like the estranged brother in Genesis 33, God is seeking and searching for us. God is running toward us with unlimited, no strings attached love. May we run toward God, accept the love and grace offered, and embrace the new life promised to us in Christ.