I saved you, Dummy. That's how we will win-- not by fighting what we hate, but saving what we love.

Ever since I was six year old, Star Wars has been an escape from real life. I always played with the toys-- Kenner action figures were some of my best friends. I had a recording of The Empire Strikes Back-- not the soundtrack but every word, musical note, and sound-- on a record. 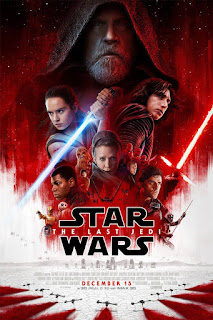 The Last Jedi, in a very real way, is the end of all that escapism. Yes, it still features aliens and space battles, but as a popular meme says, "The struggle is real." Grief. Heartache. Despair. Faithlessness. Even unforgiveness. We must go in a new direction, but clinging to the past feels comfortable and safe. When we are pulled there by force, we fight back.

This is at the heart of much of the criticism of The Last Jedi. Many Star Wars geeks, who grew up with the toys and the merch and everything else, do not want our beloved franchise taken to uncomfortable places. And when one of the main heroes of our childhood is the Moses on this Exodus, leading the way into an uncertain future, it's even harder to take.

The movie has issues and I'll deal with a couple of them in a second, but on a meta level this is the first Star Wars movie since A New Hope to deal with the struggles of everyday life. The reaction to this brilliant movie is very 2017: we lash out at whatever annoys us in order to avoid what really hurts us. Kylo Ren cannot handle his power in The Force Awakens. We're the opposite: We cannot handle our powerlessness. There's a great exchange between Finn and a codebreaker near the end of the movie. Finn asks something like, "Doesn't all this death bother you?" And the guy says,

"Maybe" isn't okay. The movie argues it's even better to choose evil than to shrug one's shoulders and keep living. It's an argument against nihilism. To ignore suffering, to turn away from human need, is worst choice we can make.

Episode Eight was directed by Rian Johnson, who was recently given the keys to three new Star Wars movies that will not be centered in the Skywalker universe. I believe the themes and questions of The Last Jedi will be further explored in the new trilogy. For the Star Wars traditionalists, Disney gave us The Force Awakens, Rogue One, next May's Solo, directed by Ron Howard of all people, and 2019's Episode Nine, directed once again by JJ Abrams, director of Episode Seven.

The Last Jedi isn't for nostalgia nuts. Spoilers from now on, so come back later if you haven't seen it yet.

OK, let's start with a couple of issues:


Some things I loved:
Luke's reluctance to the whole movie is the real sticking point, but for me it's the movie's strength. The Jedi Master, the hero of my childhood, is afraid of the power of Kylo Ren and Rey. They are both equally matched with the Force, just like the mosaic found on the floor of one of the island's cave. Luke has witnessed much death and suffering in his life, and he's done with it all. He's disillusioned with the Jedi. He's opted out of the Force. He says to Rey,


I came to this island to die.

He doesn't want to go back and face all that death again. Determined not to go back, he encounters R2D2 on the Millenium Falcon. R2 hears the speech about not going back, but then plays Leia's message from the original Star Wars. Oh boy. "You're our only hope." He says to R2, "That was a cheap trick."

Luke knows he must let his own past go. He talks a good game, but he will not burn down the Jedi tree, the symbol of the Jedi mythos. So Yoda shows up, brings down lightning from the sky, and does it for him. It's brilliant, and in its own way, liberating for Luke. In the end he helps the rebels, though it literally kills him. Love is like that.

Luke and Kylo both invite Rey and everyone else to embrace a new future: without Jedi and Sith, without rebels and the First Order. Kylo invites Rey to join him, much as Vader does to Luke in Empire-- but he knows it's a relationship between equals. He can't defeat her, so he implores her to team up. She won't. Luke was the hero of my youth, but The Last Jedi says there are no heroes, just people who must take a stand. "Always in motion is the future," Yoda says in Empire, and Episode Eight's future in motion is troubling to some.

Even with its issues, The Last Jedi is brilliant-- I loved it. It's near the top of my Star Wars list, although the Leia Superman/Mary Poppins scene keeps it from uprooting The Empire Strikes Back from its #1 slot.
Email Post