The Psalmist and the Ascension 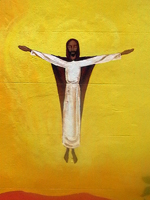 Psalm 47
Clap your hands, all you peoples;
shout to God with loud songs of joy.
For the Lord, the Most High, is awesome,
a great king over all the earth.
He subdued peoples under us,
and nations under our feet.
He chose our heritage for us,
the pride of Jacob whom he loves.

God is king over the nations;
God sits on his holy throne.
The princes of the peoples gather
as the people of the God of Abraham.
For the shields of the earth belong to God;
he is highly exalted.

40 days and nights: the time of Noah and his family on the ark. 40 days and nights: the time Moses sat in God’s presence on the holy mountain before receiving the tablets of the 10 commandments. 40 days and nights: the time the prophet Elijah, and later Jesus, spent fasting in the wilderness. 40 days: the time given to the city of Nineveh by the prophet Jonah to repent of its ways and return to the Lord. 40 years: the time it took for the Israelites to reach the Promised Land after leaving Egypt. 40 days and nights: the amount of time Jesus spent with the disciples following his resurrection. Then he gave the disciples final instructions:
“And see, I am sending upon you what my Father promised; so stay here in the city until you have been clothed with power from on high.’ Then he led them out as far as Bethany, and, lifting up his hands, he blessed them. While he was blessing them, he withdrew from them and was carried up into heaven. And they worshipped him, and returned to Jerusalem with great joy; and they were continually in the temple blessing God” (Luke 24:49-53).

Told a different way, Acts of the Apostles Chapter 1 says, “So when they had come together, they asked him, ‘Lord, is this the time when you will restore the kingdom to Israel?’ He replied, ‘It is not for you to know the times or periods that the Father has set by his own authority. But you will receive power when the Holy Spirit has come upon you; and you will be my witnesses in Jerusalem, in all Judea and Samaria, and to the ends of the earth.’ When he had said this, as they were watching, he was lifted up, and a cloud took him out of their sight” (verses 6-9).

The fortieth day after Easter is known as Ascension Day. It always falls on a Thursday; this year May 21, our oldest son’s 18th birthday; it was a transitional day for James, from being a kid to an adult. He finished his high school work; his first college class begins Tuesday. A friend told him now that he is 18 he can now do things he couldn’t do previously, like buy lottery tickets or vote or join the military or get married without his parents’ consent (some of those comments were more helpful than others). As it was for James, this day represents a transition for the disciples. Jesus has left for good this time, but it’s unlike his death on the Cross. He told the disciples all about that before it happened, and that he would be resurrected, but they did not listen. At his Ascension, there is a sense of finality. The band will not return for a second encore. The concert is over for real.

Yet unlike the finality of the Cross, the finality of the Ascension has a different emotional impact. They are not scattered, fearful for their lives. They do not grieve the loss of their teacher, Lord and friend. They celebrate. They worship. They return to the Temple in Jerusalem, not to offer cries of lament out of grief, but to praise God for the glory they have experienced. The disciples remain in Jerusalem as instructed until promised power from On High is delivered to them. Unlike our online shopping transactions, there is no way to track when the promise will arrive. They just have to wait. So they spend it together, in prayer, in silence, in anticipation for the work they will have to do. Moses waited on the mountain for forty days, Jesus fasted for forty days, the Israelites traveled for 40 years; the disciples only had to hang out for 10 days. On the Day of Pentecost everything changed forever. But we’ll discuss that day next week.

“...so that, with the eyes of your heart enlightened, you may know what is the hope to which he has called you, what are the riches of his glorious inheritance among the saints, and what is the immeasurable greatness of his power for us who believe, according to the working of his great power. God put this power to work in Christ when he raised him from the dead and seated him at his right hand in the heavenly places, far above all rule and authority and power and dominion, and above every name that is named, not only in this age but also in the age to come. And he has put all things under his feet and has made him the head over all things for the church, which is his body, the fullness of him who fills all in all.”

All things are under his feet. He is head of all things for the church. There’s a great line in an episode of The West Wing I always remember, a conversation between the President and the leader of a group of Christian refugees seeking asylum: “Who is the head of your church?” the President asks. A theological test. “The leader of our church is Pastor _________.” (I forgot the name). “The head of the church is Jesus Christ.” Amen to that! Because Jesus returns to his celestial home he assumes authority over the cosmos, a king taking his rightful throne.

Psalm 47 is all about finding joy in God’s ultimate power and authority:

Clap your hands, all you peoples;
shout to God with loud songs of joy.
For the Lord, the Most High, is awesome,
a great king over all the earth.

God is king over the nations;
God sits on his holy throne.

The disciples return to Jerusalem celebrating the reign of Christ over all things. His Ascension is a coronation, a ritual crowning of his sovereign authority. I was reminded of this exchange between Pontius Pilate before Jesus was crucified: “Don’t you realize I have power to crucify you?” “You would have no power over me unless it was given to you from above” (John 19:10-11). It is this power, which belongs to Jesus and will soon be shared with the disciples, which causes their joy. This power leads to lives changed and restored. This power leads to freedom and deliverance and mercy and forgiveness. The same power Jesus used to resurrect Lazarus from the dead Peter, the other original disciples, and future apostles like Paul will use to heal, teach, and restore. They just have to wait a few days. It’s a joy-filled anticipation.

The last day Grace United Methodist Church met for in-person worship was March 8. This is now the eleventh Sunday we worshiped virtually. It will happen again next week, and very likely will continue beyond then. Other churches in our area and around the country are wanting to re-open; some were forced to close after re-opening, when parishioners became ill; a few even died. It’s the ministry of the church which is essential, not the building. Jesus didn’t ascend to God’s right hand from inside the Temple; he and the disciples were gathered in Bethany, miles away from the building. Even though our congregation has not met in person for three months, the ministry has not stopped. God has brought new people to Grace UMC on the website or the Facebook page; some joined a Bible study we offer in the virtual space. The virus forced us to rethink how and where we worship, but it's also an opportunity to reach new people with the gospel. I am certain new avenues for service locally and beyond will arise when we allow ourselves to be used for God’s purposes.

Jesus laid out the mission plan for the disciples’ ministry after the promised delivery of power: “But you will receive power when the Holy Spirit has come upon you; and you will be my witnesses in Jerusalem, in all Judea and Samaria, and to the ends of the earth.’” What does Jerusalem/Judea/Samaria/ends of the earth look like during a global pandemic? I have no idea! Am I going to hide out while we figure it out? No way! Grace’s vision for ministry is unchanged, even as everything about ministry has changed: Embrace All, Engage with Jesus, Expand the Kingdom.

The other day I was texting Tom Busby, one of our key lay leaders, but also our church’s go-to techie. I had some questions about camera positioning. I said the tripod which holds the camera needs to be raised, or I could shrink to fit. He shared some thoughts and said, “Please don’t shrink.” I’m not shrinking from the task in front of Grace Church; I know our worship leaders and leadership team, Tom included, aren’t shrinking; our members and friends and supporters aren’t shrinking. It’s time for us all: adults, children, and youth, to stand up, rise up, and embrace the new challenges before us. The same investments we needed before March to empower the church we’ll need in June: hospitality, financial support, enthusiasm, gratitude, commitment to service, openness to the new opportunities Christ will send our way.

Jesus’ Ascension is not a cause for grief and mourning. It’s an occasion for praise, thanksgiving, and preparedness. The disciples will no longer sit back and watch while the Master does the healing, teaching, and loving. The work will soon be theirs. Today the work is ours. Noah, Moses, Elijah, Jonah, Jesus, the disciples after the resurrection: they all had forty days for their ministry to be fully realized. I counted the other day. It hasn’t been forty days since Grace UMC moved to virtual ministry; it’s 77! Nearly twice as long as them! As the King of Glory gazes upon his church in Sherman, Texas, and around the world, may he find in each of us a willing servant, together forming the Body of Christ, ready to be deployed to the ends of the earth. Whatever it looks like.  In the name of the Father, the Ascended Son, and the Holy Spirit. Amen.