Just Me and My Dad

Dad and I just got back from a really special trip. After he got off of work yesterday we packed up the car and drove to see a Rangers baseball game. It took a long time. There was lots of traffic. There were no movies to watch-- we were in Dad's car, and I didn't have any of my music except a Shrek song. I kept myself entertained for a little while by looking at my Lunchable box, which had pictures of Transformers on it. This is the new Transformers movie, not the old cartoon one Mom and Dad got for us from the mail movie store-- I've watched it like 600 times, because they can't find the envelope it came in, so they can't send it back! Dad says I can't see the new Transformers movie until I'm like 18.
After a while I fell asleep in the car, even though the sun was pretty bright on my face. After I woke up we still weren't at the game. We finally got there, but then Dad remembered he had to go to a bank to get money for parking and food. We drove around forever trying to find a bank! Finally we parked and went to buy our tickets-- and this man with a little girl gave us two tickets for free! The Dad bought two hot dogs, and we sat at a picnic table. He ate his dogs, which were very messy, and I ate my Lunchable. Then we went to our seats and watched the game. I immediately saw a bouncehouse far away and asked Dad if we could jump. He said no, that we had come a long way to watch a game, not jump. Then a Ranger hit a home run and I saw fireworks! Dad missed them, but he did get a picture of the big TV. 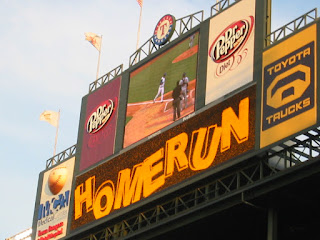 Since Miles wasn't at the game, we got to eat lots of peanuts, which was very cool. We

made a big mess and didn't have to clean it up! Later in the game some big boys with crazy hair and no shirts kept shouting at everyone to stand up and yell. Pretty soon lots of people around us were doing it-- but not Dad. Then everyone in the stadium did it. It was really loud. Dad said they were doing something called the wave, but everytime it came by us he still would not stand up and yell. He said people were just being silly. 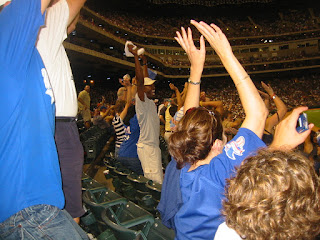 After the game (actually we left before the game was over, which makes Dad crazy normally but it was way after my bedtime), we drove to Duncanville to spend the night at our house there. I was very excited to be back in Duncanville! There was no furniture, so we slept in sleeping bags under the fan in Mom and Dad's old room. I love that house, although it is a little different now-- Mom's bathroom isn't pink anymore, and my room isn't orange. Mom and Dad hope it sells soon. Can't say I agree...
This morning we woke up and went to the donut shop for breakfast. After a quick stop at the furniture store to look for something for Baby Brother, we went to Ft. Worth to the science museum-- a Star Wars exhibit! I was super excited for this! It was so cool-- they had models from all six movies (I've seen I, II, IV, V, and VI-- Dad says I can't see III until I'm eighteen or so-- something about Anakin being too mean). They also had lots of costumes. And there was this special ride I got on that actually floated on air-- I'd show you a picture, but Dad thinks it's a bad idea to put my picture on his blog for some reason. Here are some of my favorite pictures: 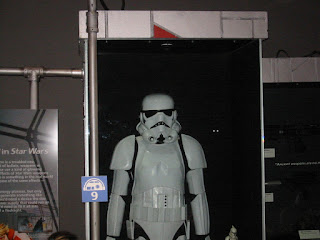 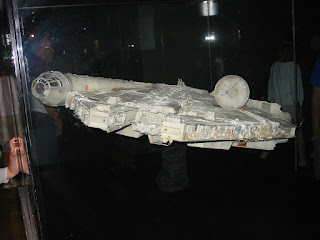 After the museum, we ate lunch at Whataburger-- I got a huge Sprite-- and came home. The drive back to Prosper wasn't as long as yesterday. Mom and Miles got home right after we did-- they were out at a different furniture store looking for baby stuff. Now Mom, Miles, and Dad are going to take naps. And I'm going to watch the cartoon Transformers again-- #601! I hope they never find that envelope! Thanks for the fun trip, Dad!
Email Post

Anonymous said…
James, what a prolific writer/communicator you have become since I last saw you. What a special evening you described! I know that you will remember it always. In my family I am the 2nd oldest of 6 and the oldest girl and can remember very few times I spent alone with either of my parents. I do recall going fishing with my dad when I was about 8 years old--just me and my dad. I can not remember if we caught any fish. I did not really like fishing but it is with joy that I recall this outing, even now.
Thank you for sharing and prompting the memory from my childhood.

Anonymous said…
Cute! It so doesn't surprise me that your dad didn't do the wave! Rock on, Frank!