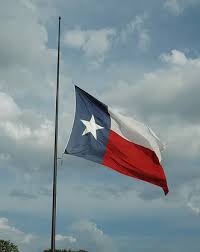 Last night our family did as we have the last several days. We ate dinner together and watched a few episodes of The Flash. We all went to bed around 9:30. I woke up this morning around 6:00, and found Christy already up. She was reading on her phone. She told me about the shootings in downtown Dallas. I knew from earlier in the day that a protest was happening. I was to speak to some Project Transformation interns last night at Austin College, but their leader called to say they had decided to attend the protest rally instead. Christy and I were immediately filled with grief and anger about the shooting of police officers and civilians in our city.

I am not from Dallas; I grew up in Bay City, along the Gulf Coast of Texas, near Houston. In fact, I grew up hating Dallas. I never watched the TV show-- I couldn't care less who shot JR. I was a Houston Oilers/Rockets/Astros fan, so seeing any Dallas area team lose filled me with joy. When I felt called to pursue ordained ministry, I moved to Dallas to attend seminary at SMU. I met Christy there, our first semester (she is always quick to point out that I was in graduate school, she a freshman-- just to be clear that she is younger than me). My first winter here the Cowboys beat the Steelers in the Super Bowl. My two most hated teams played each other. I didn't really care who won, although it was cool to live in a city which a football championship (the Rockets had won titles when I lived in Sugar Land, near Houston, in 1994 and 1995).

I was ordained in the Texas Conference in 2001, but I never actually served within its bounds. During seminary I served as a part-time chaplain at Parkland Hospital. I interned at Oak Lawn UMC near downtown Dallas, and after a year in England returned to the same church for three more years as an associate pastor. During that time our country was attacked on 9/11, and we opened the doors of the church for a prayer service that Tuesday night, as well as Friday at noon. I transferred my conference membership to North Texas in 2002, officially making this our home. In 2011 we returned to Oak Lawn, this time as the lead pastor, and among the many activities we were involved with, I proudly walked in the Alan Ross Freedom parade twice. James and Miles, our two oldest, were born at Baylor Dallas, just a few blocks away from last night's horror.

When my kids were little, I made a decision: I would become a Dallas Cowboys fan. This was not easy, but my Oilers had moved to Tennessee of all places, and the Texans did not yet exist. I wanted to watch football with them and have some ownership of the town. My first visit to the Ballpark in Arlington was in September 1995. The Rangers were out of contention and Ken Griffey Jr's Seattle Mariners were in town. I walked up to the ticket window with $17 dollars in my pocket. I bought a ticket for $16, the Rangers lost, Griffey hit a huge home run. I couldn't have been happier. But I loved the Ballpark immediately (side note: Arlington, vote NO in November. The Ballpark is a jewel-- hot yes, but beautiful. A new stadium with a retractable roof will have no soul-- like Minute Maid Park). Over time, my favorite Astros players retired, and especially following the painful World Series of 2005, I became a Rangers fan. The Rangers played in the World Series in 2010 and 2011. The Mavericks lost a title in 2007 and won in 2011, the Stars won in 1999 and lost in 2000. I was living in a championship city.

I'm still waiting for the Cowboys to win a title with me officially in their fan base-- 2017 will be the year!! I know Jerry Jones creates lots of heartache for Cowboys fans and haters, but I have to say this: the guy is always an optimist. He really believes, often when no one else does, that his team is just inches away from winning. And it is that optimism that defines the city of Dallas. Several years before I was born President Kennedy was assassinated in Dallas, and the city suffered that grief for decades. Despite that tragedy, Dallas and all of North Texas became one of the greatest, most exciting regions of the country. I love that Dallas is both traditionally southern and progressive, religious and questioning, has a strong LGBTQ community, proud communities of color, and every other person and position along whatever spectrum you can imagine.

Thank you, Dallas, for welcoming me two decades ago, even despite my jealousy for your successes versus Houston's losses (hey, growing up an Oilers fan was not easy). Thank you, North Texas Conference, for welcoming me as a full member fourteen years ago. Thank you, SMU, for being the place I met my sweet wife, as well as the place our kids hope to attend someday. Thank you, Oak Lawn Church, for allowing me to serve and learn amongst you. Thank you, Baylor Dallas, for literally carrying two of our boys into this world. Thank you, Dallas, for being home to more restaurants per capita than any other city in the USA, especially the Angry Dog in Deep Ellum. Thank you Dallas for hosting the Great State Fair or Texas, which our family has attended every year on opening night for fifteen years or so-- yes, including September 30, 2016!

This afternoon I changed my Facebook profile and cover photos to family pictures taken at our favorite Dallas places, SMU and the State Fair. We moved to Collin County in 2014, and two weeks ago we moved to Grayson County. But for 21 years now, and most likely for the rest of our lives, Dallas will always be home. So like so many others, I am grieving today. And we will need the time to grieve our beloved dead. We will pray for the families of those killed, and for the Dallas Police. What makes Dallas unique is that the protest happened in the midst of Dallas police officers. The police were there to protect the peaceful protesters, walking with them, talking with them, taking pictures with them. And then things went bad. Our prayers and love are there for our city, our police and civilians, our community, today. Love you, Big D.
Email Post