Last week we took the boys on their first-ever flights, to New York City. Each day started fairly cool and ended warm and sunny-- about 85-87 degrees. Christy has visited New York several times; for me this was the second time-- the first was only a weekend five or so years ago. We flew on Southwest, still constricted by the Wright Amendment, meaning we had to stop in St Louis on the way up and Nashville and New Orleans on the way back. We arrived at La Guardia, which, compared to the airports above, and especially Love Field, is way too small and crowded. The plan was to take the bus and subway to the hotel, but for some reason neither our credit card nor debit card worked (we fixed it later)-- and the machines did not take cash. So we hired a mini van! Like our every day life!

We stayed in a hotel in MidTown, near Penn Station and Madison Square Garden. Checking in around 4:00 p.m., we picked up some hot dogs and giant pretzels from a street cart and headed to Times Square, where we picked up some goodies-- notably Miles' "Cooper Trooper," a 31 inch storm trooper from Star Wars (he's peeking out of Miles' bag): 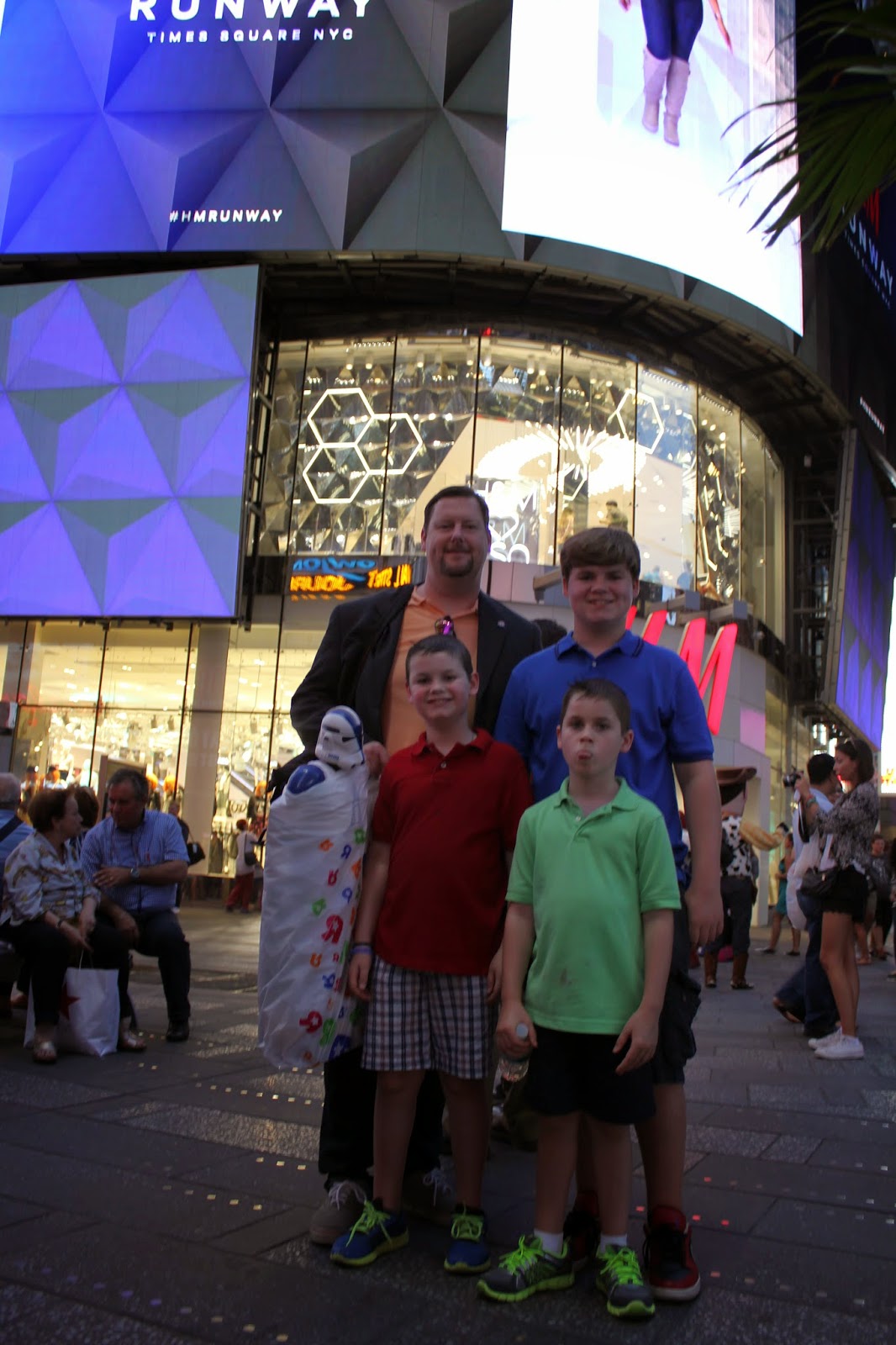 Soon it was dinner time, so we stopped at Patzeria, a sort of whole in the wall joint. By the way, if you are traveling to NYC, download the Trip Advisor New York guide on your phone. Great reviews and maps.

First Full Day-- Tuesday
We bought those hop on/off tour bus deals, which can be fun-- the boys liked being up on the second deck. But they are also slow (we waited in line nearly an hour Wednesday morning), can be unsafe (there was a wreck in Times Square during our visit, injuring about 13 people), and the tour guides aren't so knowledgeable. We jumped off our bus at the Empire State Building. I was very excited about this, but in the end I am not sure 20 minutes on the 86th floor observatory were worth three hours or so of our time. The views, were, of course brilliant; but there were lots of touristas up there with us. James and Linus both said Empire was their favorite part of the trip. Later that afternoon we journeyed downtown to the 9/11 memorial (we did not go to the museum). It was a very moving experience, filled with emotion. If you are interested in the sermon I preached on the tenth anniversary of 9/11, click here. 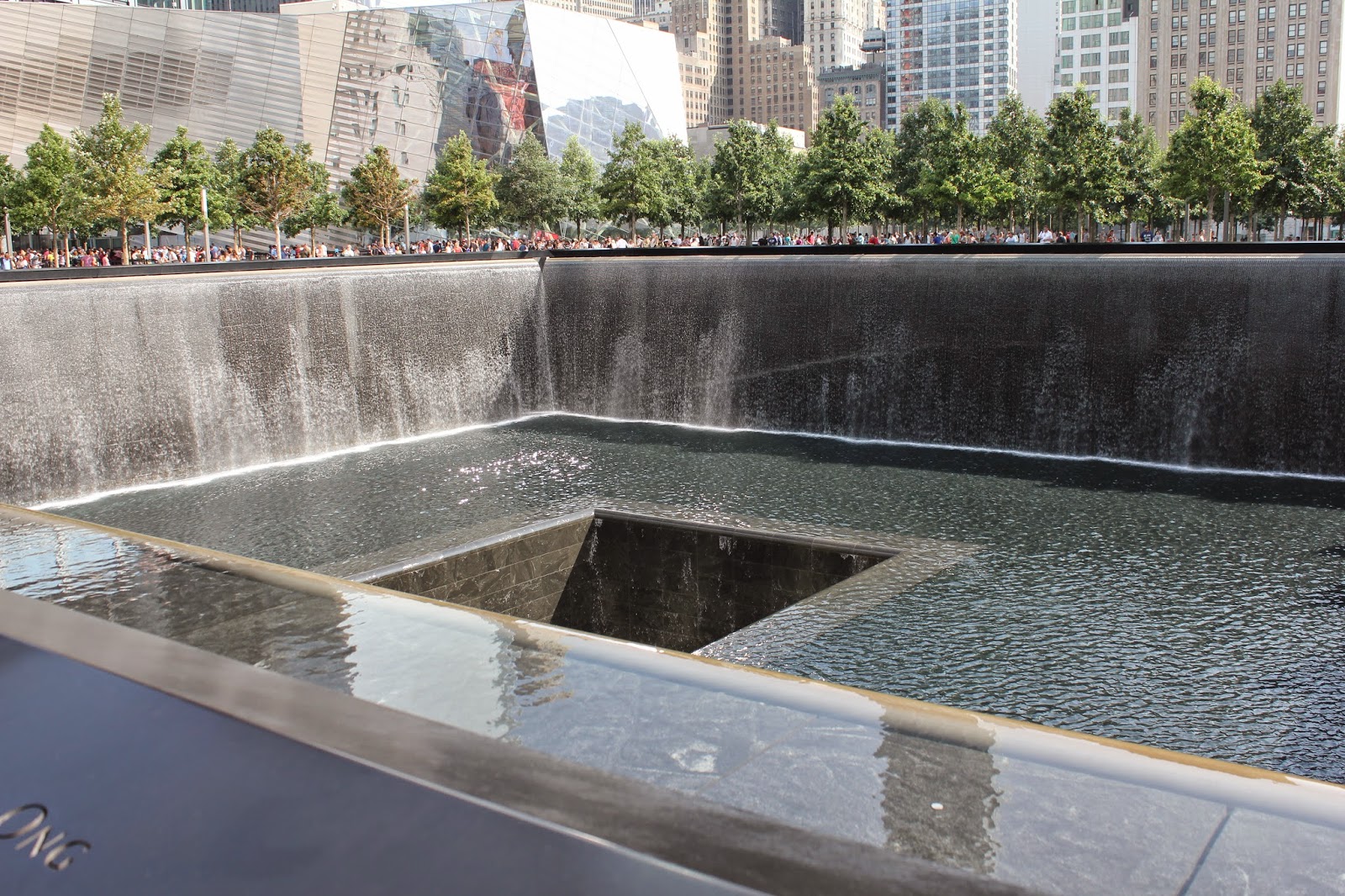 Our next goal was to take the Staten Island Ferry past the Statue of Liberty. Side note: each member of the family picked one thing they really wanted to do in NYC. Miles' choice was to go in the Statue's crown. Knowing we had to buy tickets in advance, I logged on a week early, only to find out I was three months late-- tickets are available for October visits! Fearing one of those terrible Dad conversations, Miles was very understanding, thankfully. It helped knowing it was 300 steps, 21 stories, no A/C, and 20 degrees warmer inside. Considering how warm it was on the trip, I was glad I messed up Liberty! Anyway, Miles decided to skip the whole ferry trip of he couldn't go to the crown. The ferry is free-- saved us $100+! Paid for dinner that night! 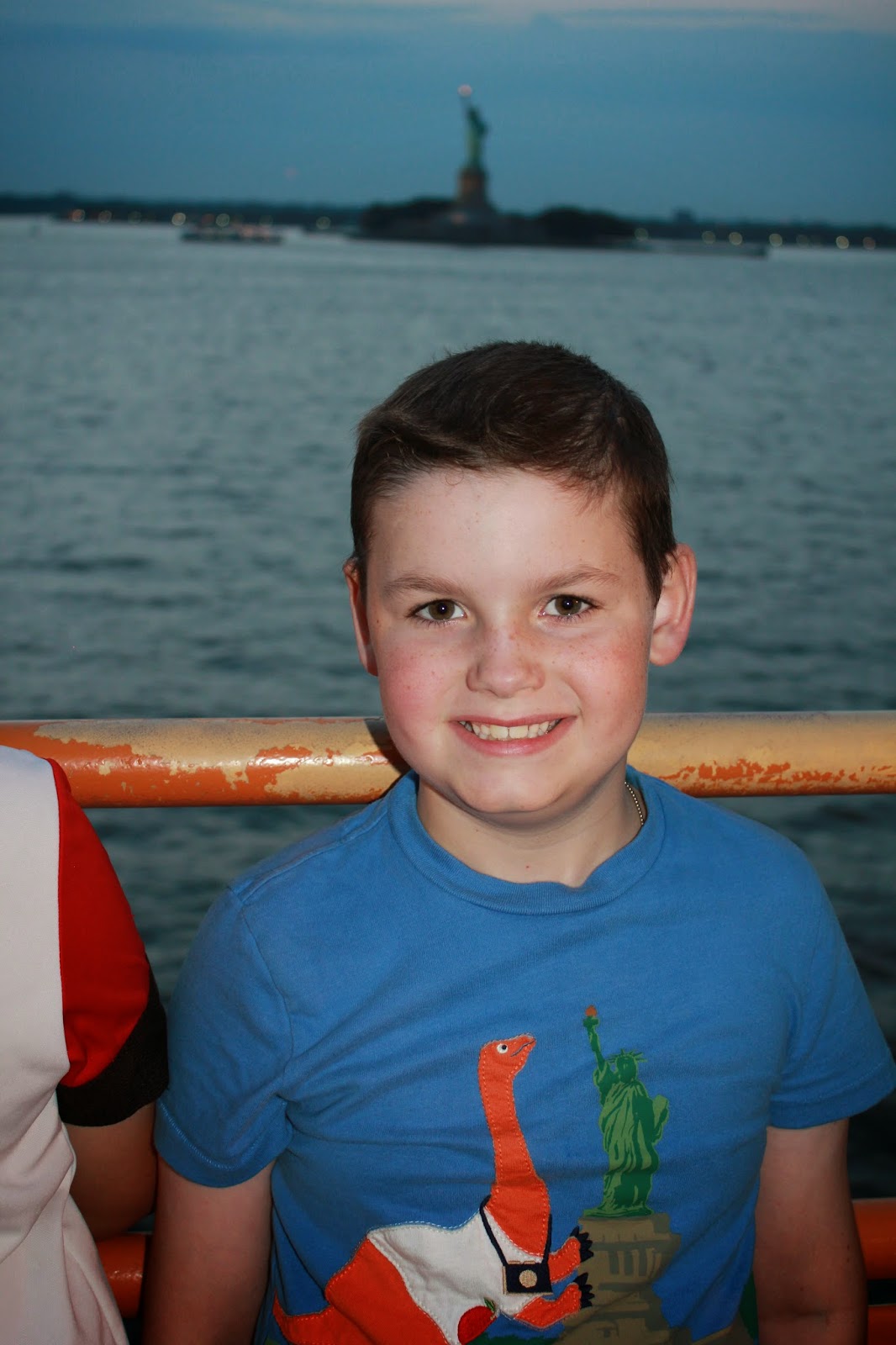 (Note the shirt-- we actually bought this a couple of years ago before any NYC plans-- it should have been handed down to Linus by now, but it was too perfect for this trip!)

Christy had the great idea to find a restaurant on the Staten Island side, so I whipped out Yelp! and found a place called Ruddy and Dean's Steakhouse. This turned out to be one of my highlights of the trip. There were only two full tables, and a few solitaries at the bar-- no tourists. Food was delicious and reasonable for the quality. A real find. Back across the Ferry, then the boys had their first Subway ride. For the rest of the trip they wanted to ride the train everywhere!

Wednesday
This was the day that started with an hour long wait for the tour bus. We finally got on the thing, but became crunched for time after rolling through Harlem. We jumped off at the Guggenheim planning to catch the subway, but we only had 40 minutes or so to get back to Times Square for the matinee showing of the Lion King. So we hired a taxi and hoped to make it. 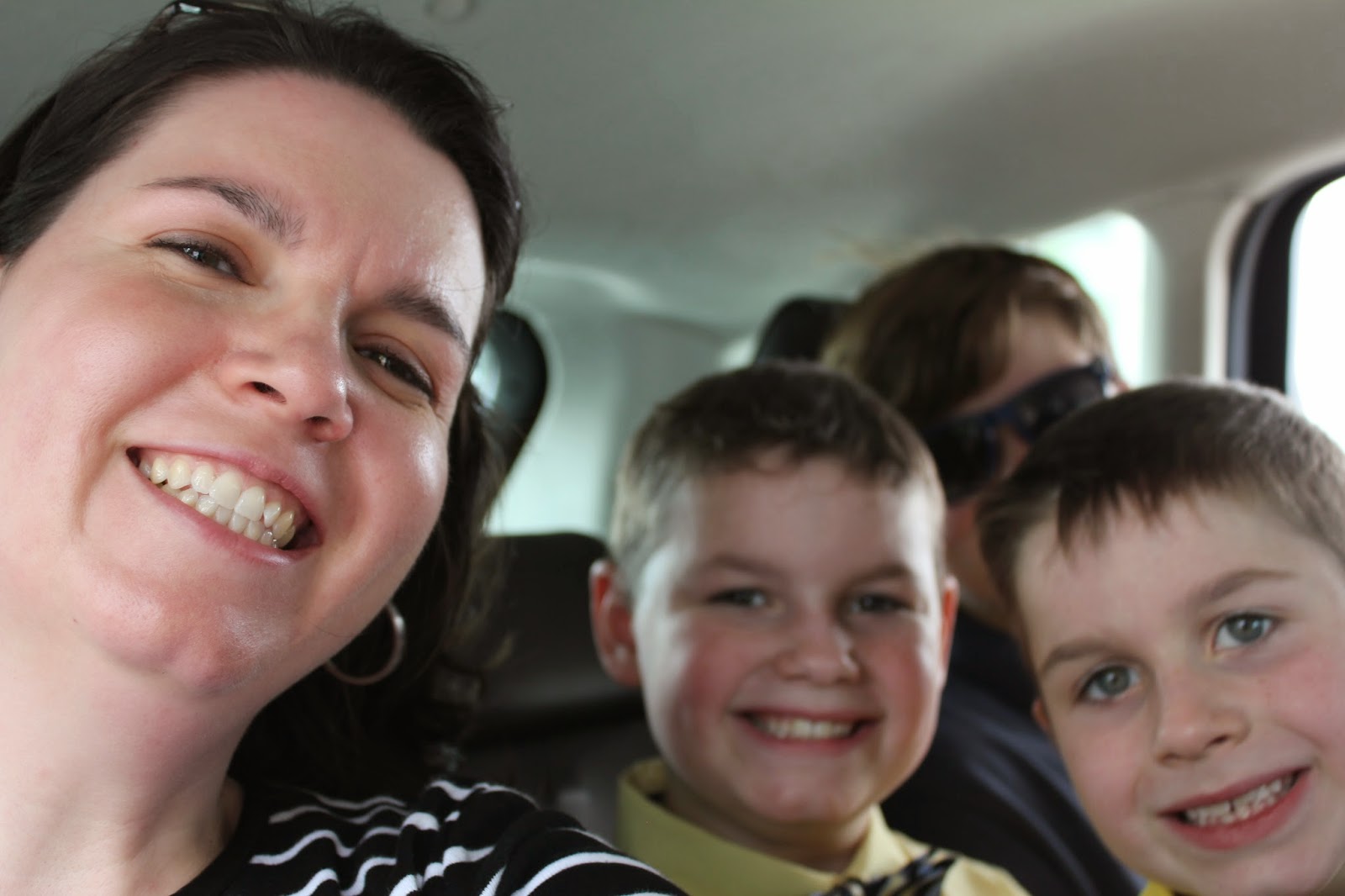 Of course traffic was a nightmare once we got to Times Square-- so we jumped out of the cab and made a run for it-- over six blocks or so. We arrived at the theatre at 1:55, just enough time to go to the bathroom and settle in to our seats. Of course the show was amazing. Christy and I saw LK at Fair Park when it rolled through Dallas several years ago, and were lukewarm to it. Kids made everything different. Brilliant. 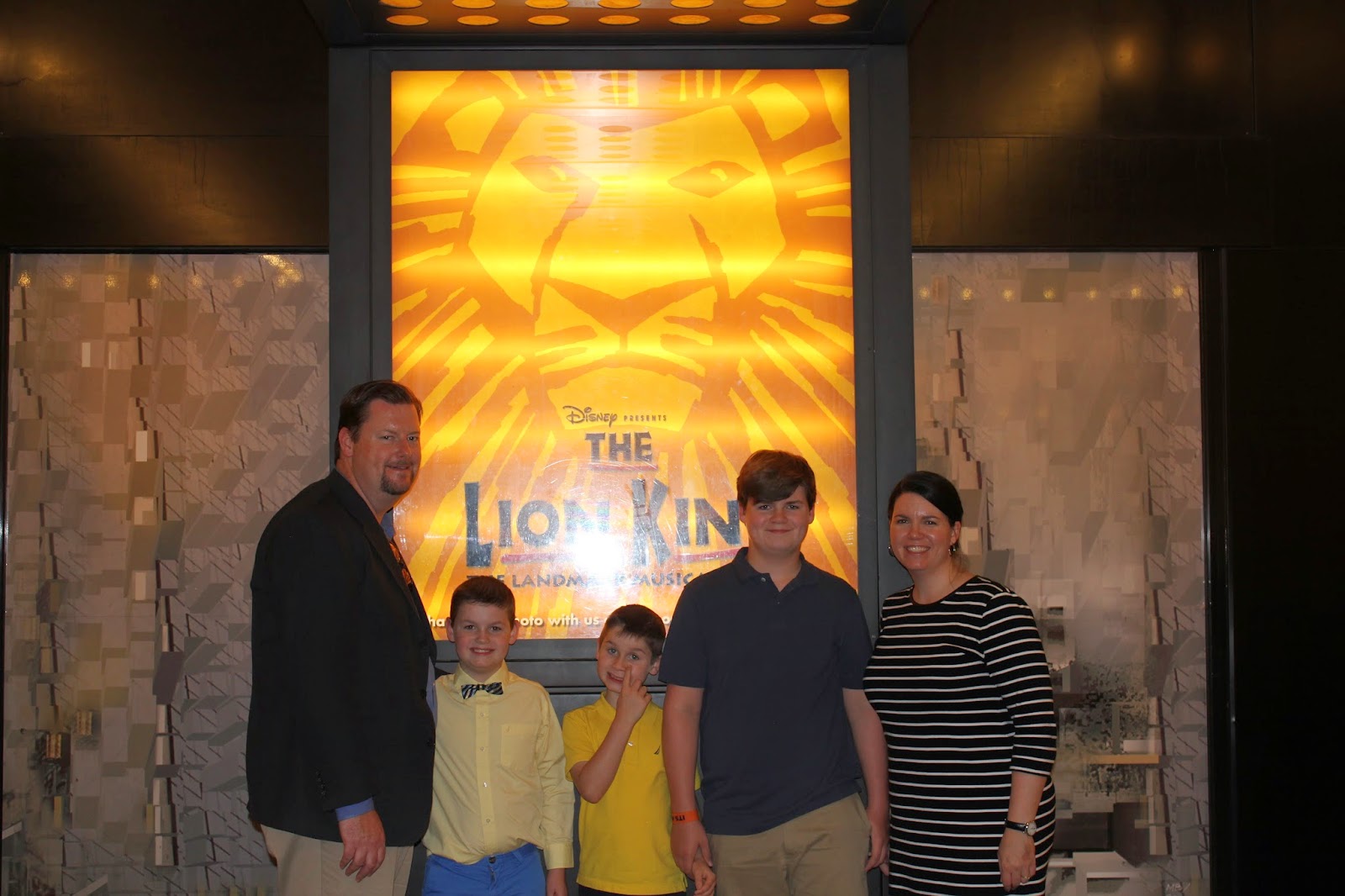 After the show we took Tim Pullen's advice to eat at Carmine's Italian restaurant, literally right next door to the theatre. Unlike the place the night before, this place was packed-- but the food equally delicious.

Thursday
This was a special day for Christy. Her childhood caregiver, Murl, moved to Brooklyn 20+ years ago. She had never met me, nor the boys, so we met her in Brooklyn for breakfast, walked across the Bridge, and explored Chinatown. The day was warm, fun, and exhausting. Murl was hilarious and instant hit with the boys. Compared to the lame tour guides on the buses, having her first-hand knowledge of where to go, what to say, not to mention her personality just made the day. We were so worn out we went back to the hotel, ate leftovers from the previous two dinners, and shut down the day before nightfall. It was a nice, quiet evening away from crowds. 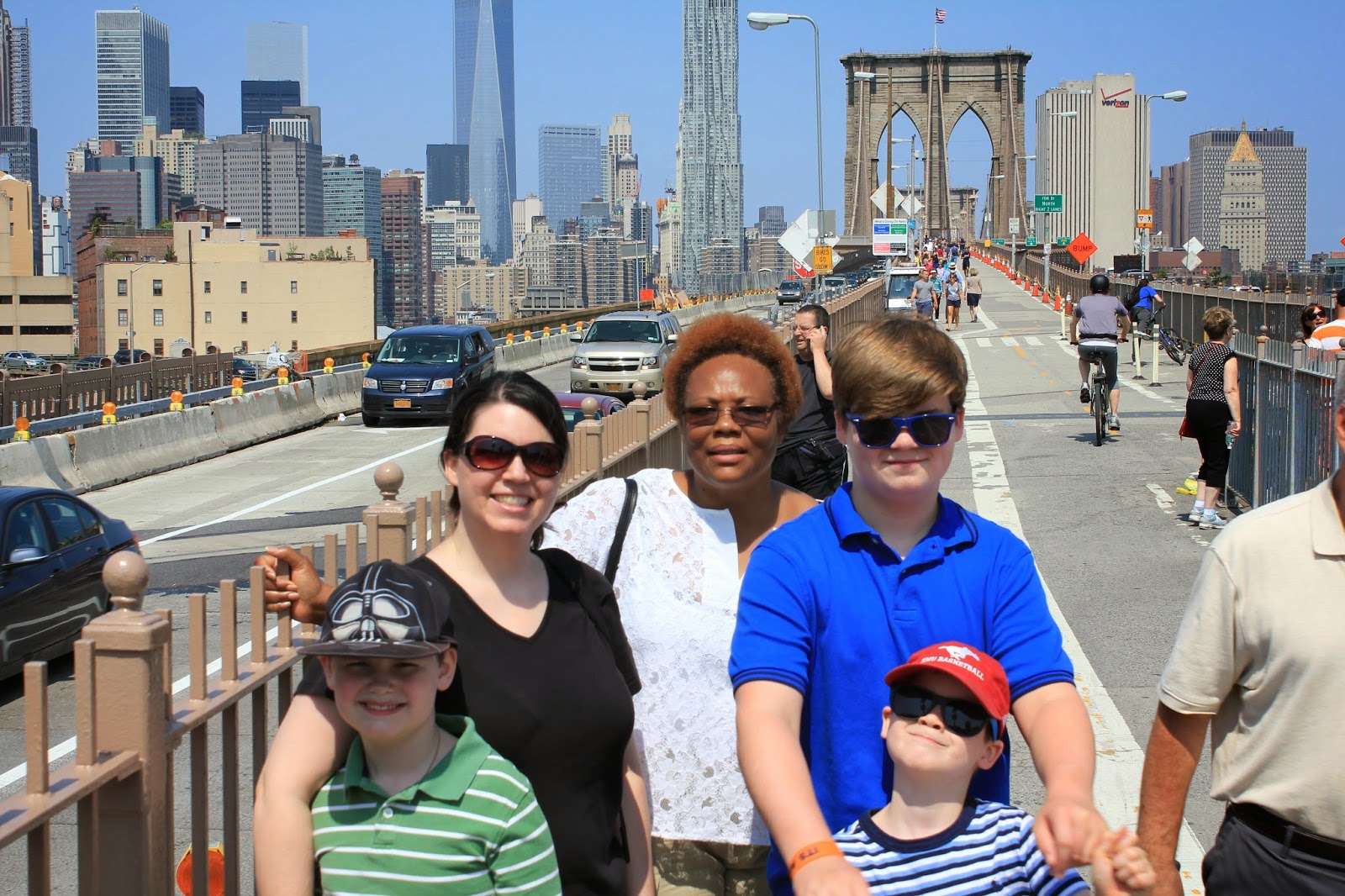 Friday
This was our museum day. It started at the Museum of Natural History and continued with the Metropolitan Museum of Art, with stops in Central Park for rock conquering. I had no idea the Met had so many historical collections: Egypt, Rome, Greece, etc. Amazing. The boys' favorite spot was the medieval armory. 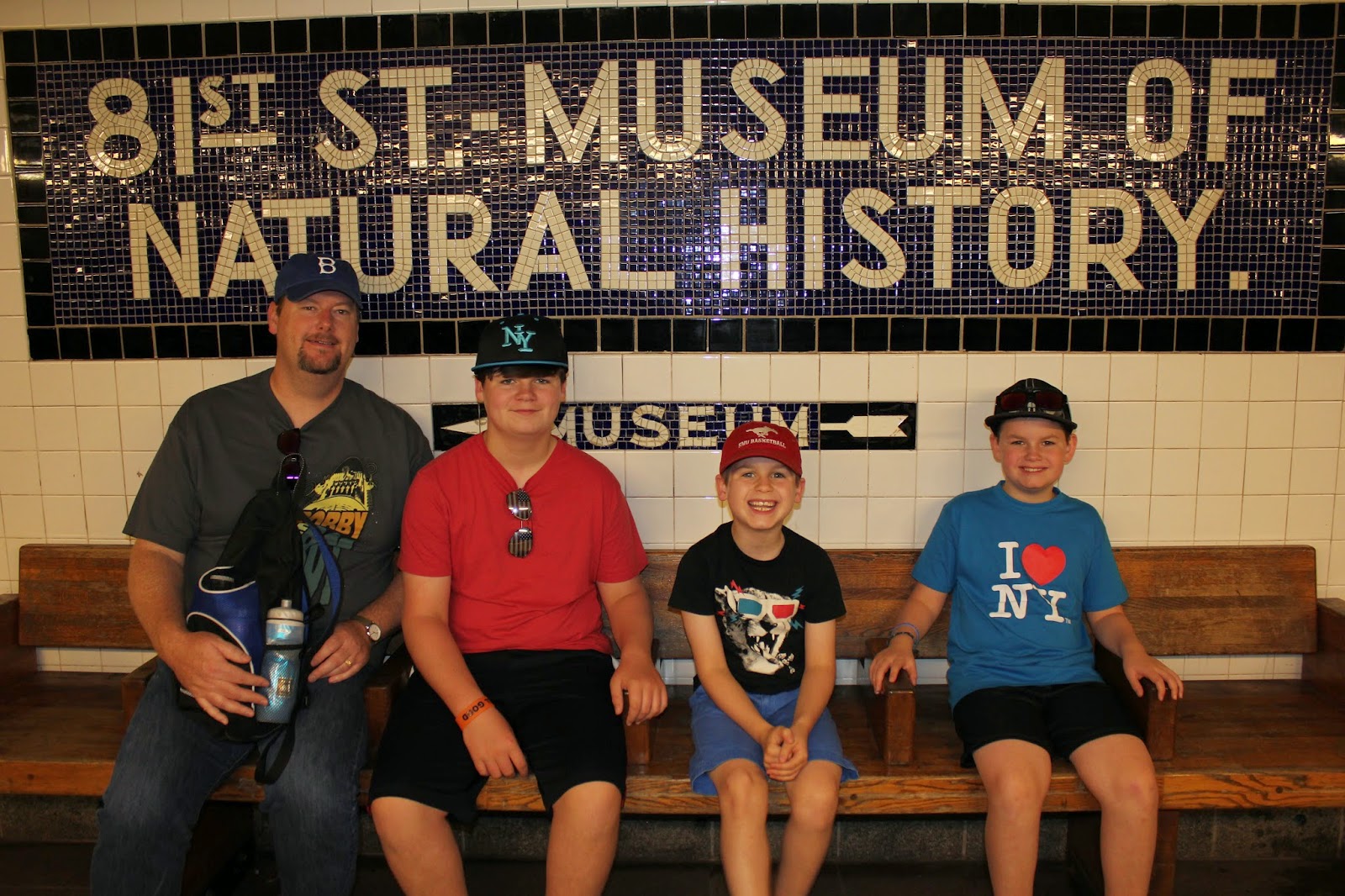 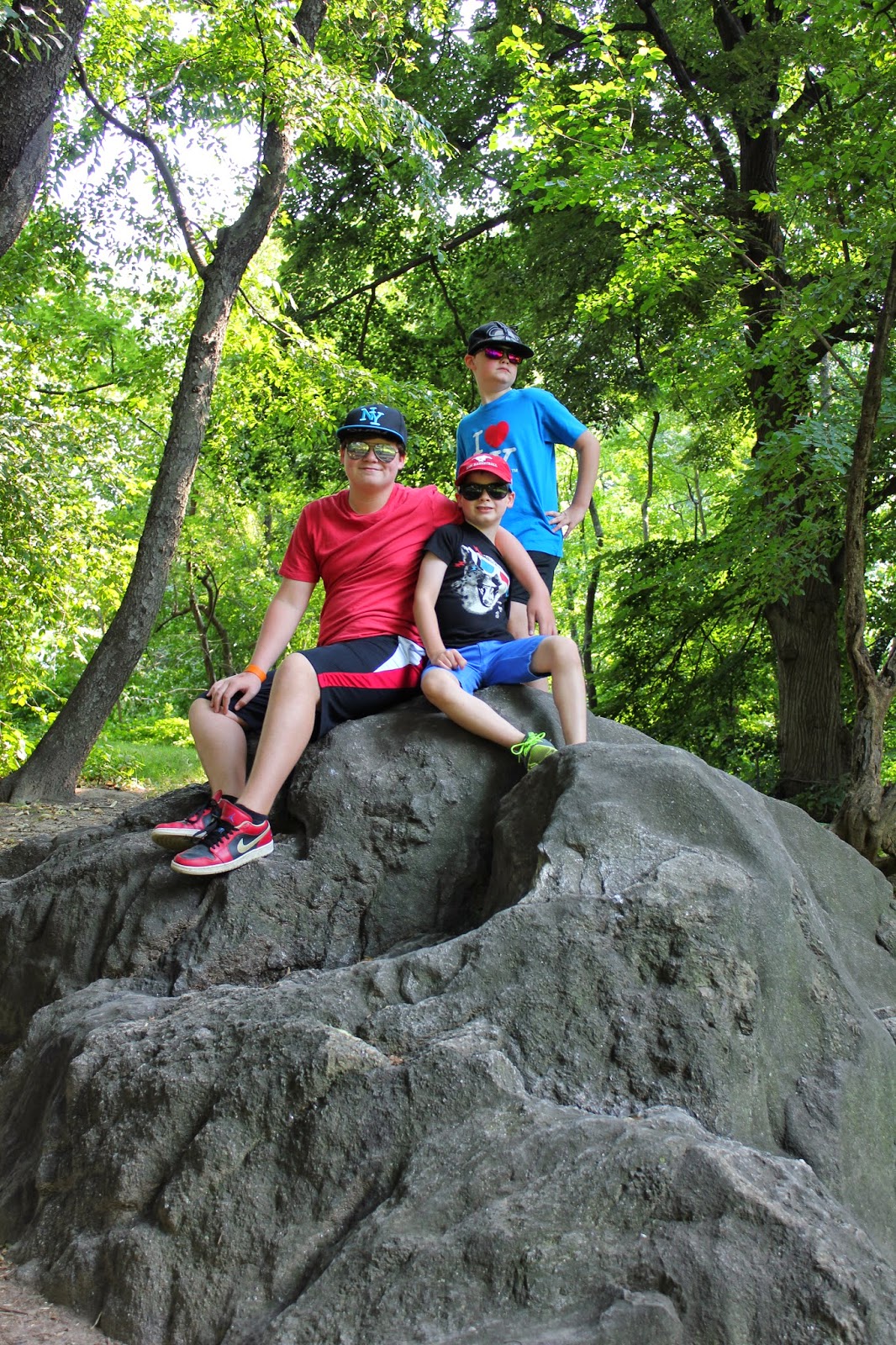 We ate lunch at Shake Shack, a New York fast food phenomenon (20 minute wait at 2:00??) and it was delicious. Dinner was at Pizza Suprema a few blocks from our hotel. Good stuff. I told the boys it'll be hard to go back to lame pizza like Papa John's etc., but they weren't so sure. We'll see.

Saturday
This was a travel day, so we only had time to walk through FAO Schwarz before heading back to the airport. 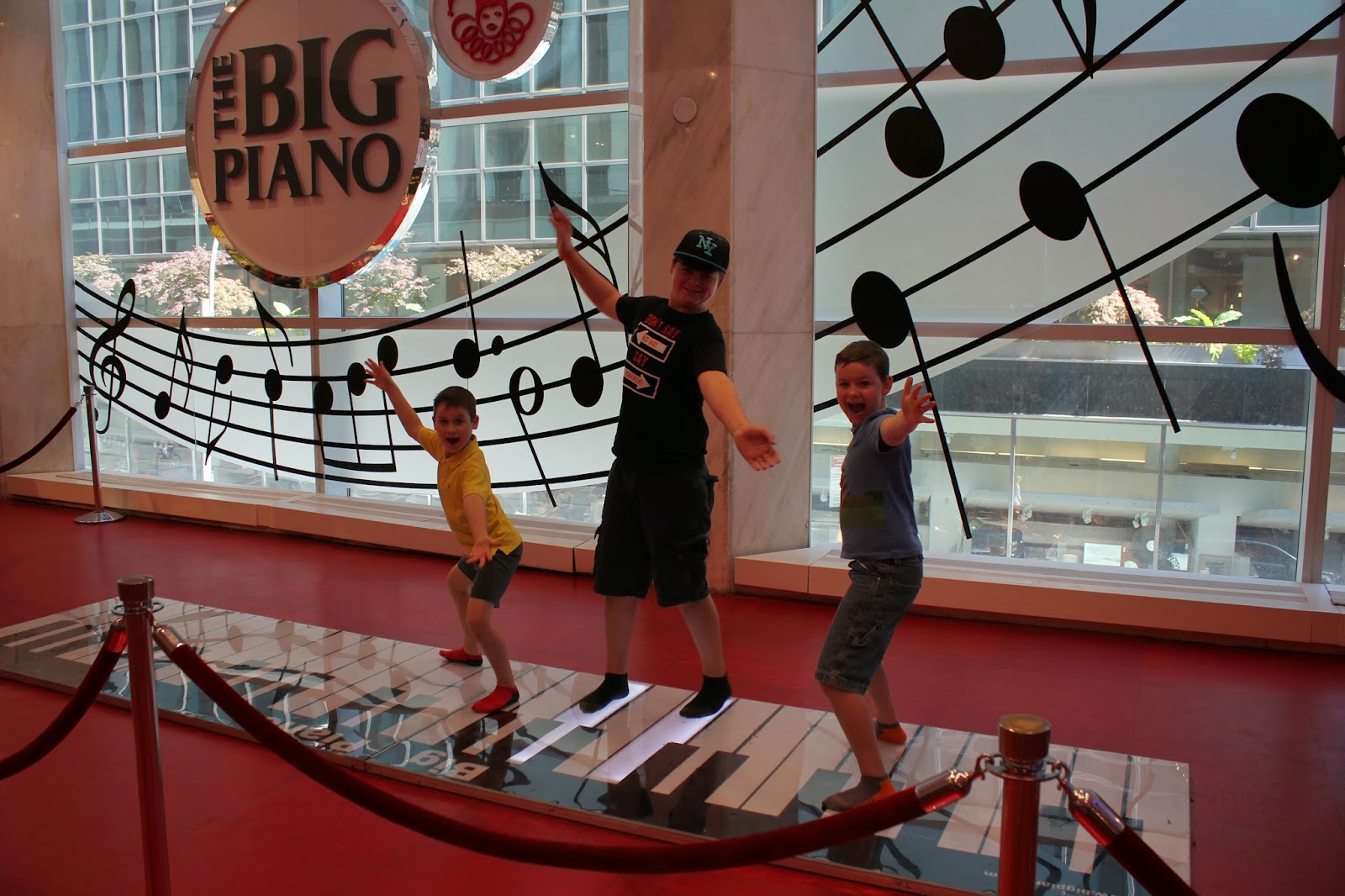 Cooper Trooper was too big to fit in any suitcases, so he was Miles' carry-on. We worried his giant plastic blaster would not make it through security, but I guess his reputation preceded him. He caught many smiles and turned heads as we bounced through several stops on the way home. 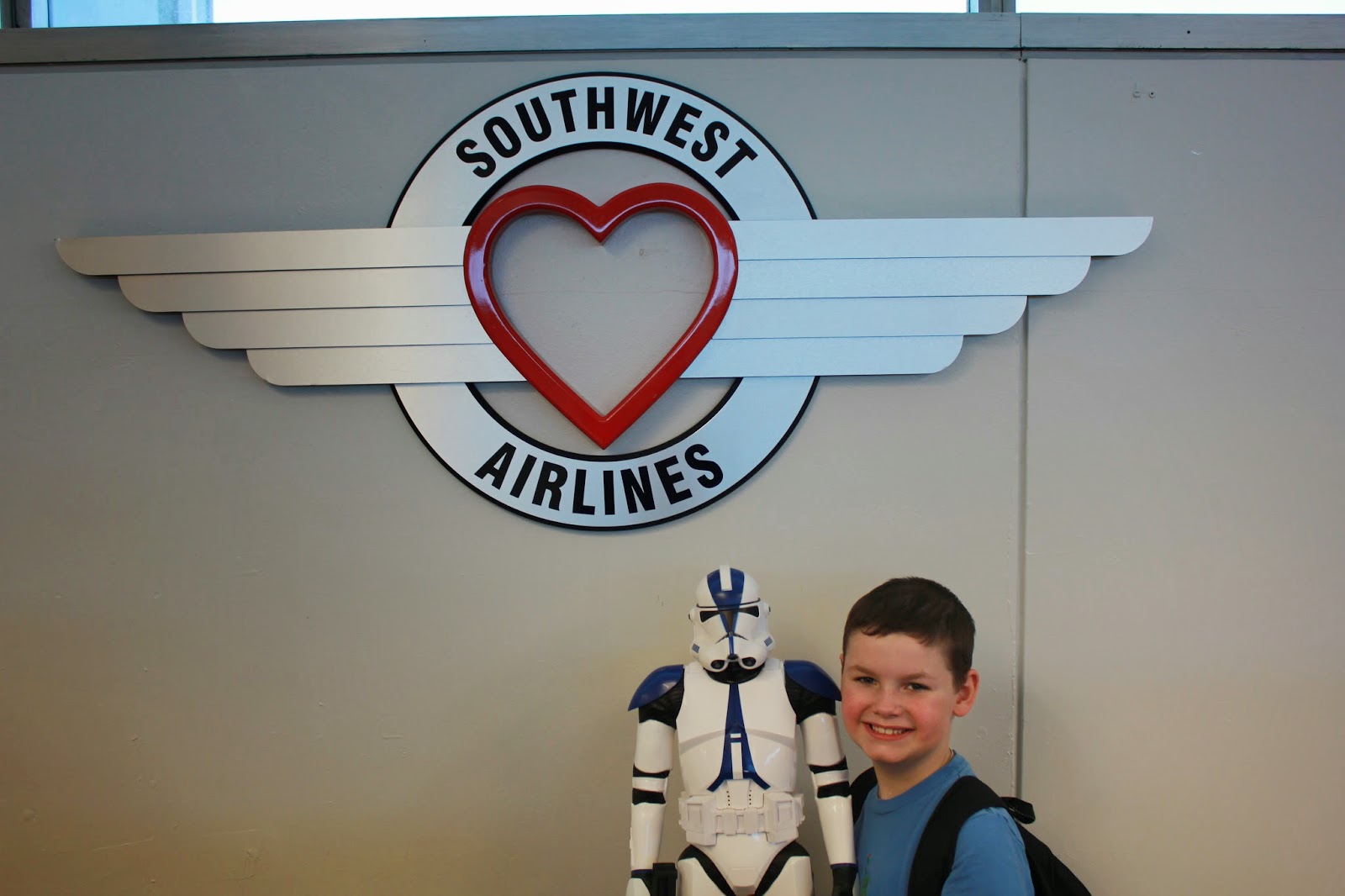 Now, if you ask the boys about the trip, you'll get an earful about the smells and crowds of NYC. And they were overwhelming at times. Christy and I are confident more, better memories will rise to the surface over time. It was a great trip and the boys did very well. It helped that our hotel had an outside deck, a kitchen and eating area, and a fold out couch for the boys.
Email Post