Wonder Women of the Crown 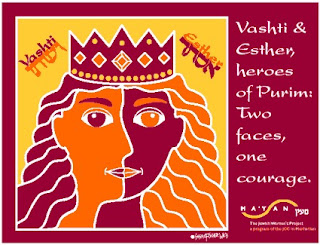 Quick trivia question before we begin the sermon: how many books in the Bible? 66. How many of them are named for women? 2. We'll explore both of those books today and next Sunday: Esther and Ruth.

Last Sunday we began our Wonder Women of the Bible series in Egypt, recalling the stories of the faithful women of the Exodus. Today we are jumping in a time machine several centuries, flying over the settlement of Canaan, the establishment of the Israelite monarchy, and the destruction of Jerusalem. Now, many of the Jews are servants of the vast Assyrian Empire. It's about 400 years before the time of Jesus, and we are touching down the Delorian in Persia.

The powerful king has spent literally months around the table of lavish feasts, surrounded by his nobles and dignitaries of the terrioritories of the empire. He's showing off his wealth; the lavish decorations of the palace, treasures stolen from conquered cultures. All of this was carefully designed and curated to feed the king's ego. The guests, who were told there were no limits on their consumption, were only too happy to comply. The king's queen, Vashti, held her own celebration-- one where women were allowed to attend. The king in a drunken stupor called for Vashti to make an appearance; he wanted to show her off like his other beautiful treasures.

The text says, "They were to bring Queen Vashti before the king wearing the royal crown." Some commentators speculate the hidden meaning of the text to be wearing only her crown. Shockingly, Vashti refused to appear. She would not be exploited in such a way. Humiliated and enraged, the king banished Vashti. Why did he do such a thing? The text tells us:


This is the reason: News of what the queen did will reach all women, making them look down on their husbands... There will be no end of put-downs and arguments (Esther 1:17, 18).

Raise your hand if you are feeling sorry for the wealthy noblemen whose wives will not be toys for their husbands' eyeballs?

Anyway, now there was a vacancy in the palace, and the king's advisors have the idea to have an empire-wide beauty contest to find the next queen. Doing this, they say, will ensure the women of the empire "treat their husbands properly." So hundreds of teenaged girls volunteer, or are volunteered, for the competition. They are sent to beauty and charm schools in order to make the best impression on the king. Out of all them, somehow, the adolescent chosen to become queen is Esther. Unknown to the king, Esther is part of the Jewish community. Her cousin Mordecai, her only living relative, encourages her to keep her Jewishness a secret. Mordecai, on the other hand, was able to safely practice his religion, even refusing to bow to the king's most trusted advisor (and greatest financial supporter) Haman. Haman's pride is so damaged that he convinces the kind to kill not only Mordecai, but all of the Jews in the empire. The king agrees.

The story is a political satire, exposing the hubris of the powerful men of the empire where the Jews are enslaved. You know, much like how Pharaoh is portrayed in Exodus. The power of their wealth but insecurity for their own identity fuels their rash behavior. Interestingly, the Book of Esther was not considered holy scripture for centuries, because God plays no active role in the story. No plagues, no burning bushes, no divided seas. When Esther hears of the plot to kill the Jews she orders them to fast for three days, and she participates, but that is the only reference to any religious practice in the book. Mordecai assures Esther that salvation will come to the Jews "from another quarter," if she refuses to act, most likely referring to God, as in "Hey if you don't speak up God will find a way." But Esther finds her voice, and her people are saved. The victory is recognized by Jews every year at the festival of Purim, which takes place this year during the first week of March. The established festival of Purim, first mentioned in the Book of Esther, may be why the book is in the Bible.

We learn from these Wonder Women of the Crown that our lives are more than our outward appearances. Vashti keeps her self respect by refusing to parade herself in front of a room filled with drunk men. Esther's beauty grabs the king's attention, but it is her selfless acts at the risk of her own safety that makes her special. And while the Book of Esther does not speak of a God who divides seas to save people, the God who saves shows up in the lives of faithful people in the story. This week marks the 75th anniversary of the liberation of the Auschwitz concentration camp near the end of World War II. We must remember history, but also keep our eyes, ears and hearts open to what is happening to vulnerable people in our community today. Borrowing the motto of Reformed Judaism, it's up to all of us to repair the world by countering violence and hate with solidarity, peace, and justice.