Before December ends in a few hours, I wanted to squeeze in one last blogpost on movies. I’ll offer a few short reviews of movies Christy and I saw on our annual 48 hour date in Houston over Christmas break. Then I’ll offer my top-10 of movies 2015.

First, a word of thanks to everyone who read, commented on, shared with others, and generally appreciated my Advent snowglobes series. My mother has given me a snowglobe every Christmas since I was in high school-- 30 years now. I had the idea of posting pictures and a reflection every day during Advent last January as I was packing up my snowglobes for another year. Here's the proof-- I left myself a note: 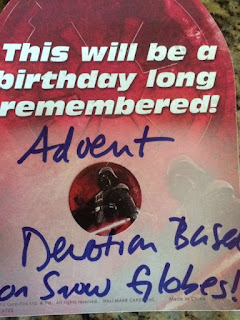 It was a real labor of love. Some days I wrote early in the morning, others later. Some posts were more popular than others by a wide margin. Many people shared the posts on Facebook with their friends. I've had the idea of self-publishing the pictures and reflections into an Advent devotional book-- this is a much better alternative to Mom's idea of re-writing new devotionals every year! Not going to happen. Anyway, today's post will be my 26th of the month of December, more than I wrote the entire year of 2014, bringing the total this year to 62-- the most ever posts in a single year. Again, thank you for reading and sharing.

Every year Christy and I leave the boys at my parents' house and we spend a couple of days in Houston. We catch up on movies, do a little shopping, eat out, whatever. This year I had to return to Dallas for a wedding rehearsal and service this week, so our movie viewing was limited. Together we saw the new Dr Who Christmas special, "The Husbands of River Song" The Big Short and Spotlight. And while she was at the spa, I saw Quentin Tarrantino's The Hateful Eight.

Dr Who
We don't have BBC America at home any more, so we jumped at the chance to see Dr Who on the big screen while we wait for the most recent season to come to Netflix. Dr Who is a fun, silly, at times scary sci-fi TV series in the mold of classic science fiction: problems to be solved that often have universal themes beyond the present crisis. There is always a Dr Who Christmas special that is a stand alone episode, separate from the current series. River Song is a recurring character played by Alex Kingston. Her relationship to the Doctor is too complicated to break down here-- not sure I understand it fully myself. This episode was a fun experience, but I don't have a whole lot to say about it.

The Big Short
One of my last snowglobe posts mentioned that when I was a kid my life's ambition was to make a fortune on Wall Street. I am not sure when it happened, but over the years I have trusted Wall Street less and less-- not just with my own money, but with their control of the economy. During the financial crisis of 2008, I was angry. People lost their jobs, homes, savings, while executives on Wall Street made outrageous bonuses. Risky, even illegal, actions by bankers were not only unpunished-- they profited from others' suffering, even to the point of government bailouts. So when the book The Big Short came out, I wanted nothing to do with it. I knew it would just make me angry. But I was willing to see the movie-- the cast was brilliant: Steve Carell, Christian Bale, and a host of great supporting actors. In a funny, eclectic way the movie told us the stories of excessive greed at the very heart of Wall Street-- but how a handful of smarter, less connected, and honest men beat the system at its own game. This is a great movie and a must see. After seeing it you'll be tempted to close your mutual funds and go back to mattress stuffing and burying cash in coffee cans in the back yard. 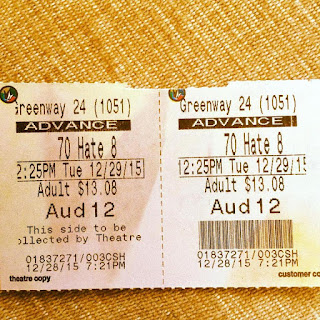 The Hateful Eight
I don't know if Hollywood will ever give the great Quentin Tarrantino a Best Director or Best Picture Oscar, or if he'll get one of those "lifetime achievement" Oscars in thirty years or so (he has won two Oscars for Best Writing: Pulp Fiction and Django Unchained). This should be his year. The Hateful Eight is a great movie. I was fortunate to see it in 70mm, whereas most cinemas will project it digitally. It looked like movies used to look-- grainy at times, full, rich colors, not the clear HD stuff we normally see. It even had a twelve minute intermission, extra music, and narration by the director himself. It's the story of a group of folk stuck in a one-room cabin during a blizzard: bounty hunters, a sheriff, a hangman, a Confederate general (the movie is set in the 1880s), others. I thought of the board game Clue more than once-- you're trying to figure out alliances and motivations. The dialogue between characters, especially in the first half, is tense and deliberate. You feel like you are in that cabin with them. You can feel the violence in the air. It's a great movie experience, especially if you can catch the 70mm version. Yes, it is violent and has pervasive language-- hey, it's QT-- but compared to some of his other movies there is less-- only a few characters-- and given the setting and performances, this may be his best chance for Oscar. As a side note, here are my favorite QT movies in order:


There is not a single movie on that list that would be unworthy of Best Picture in any year. Think about that. What a talent.

Spotlight
We almost didn't see this-- who wants to devote two hours to a movie about clergy sexual abuse-- especially as a clergy??? The abuse itself, uncovered by the Boston Globe in 2001, is not the subject, as much as the monumental effort a team of investigative reporters, known as "Spotlight," put in to finding the truth. They discovered a massive cover-up by the Church of priests who abused children, but were reassigned, over and over again, to other parishes without anyone's knowledge. Of course this was not limited to the Boston area-- this happened on a global scale, and left millions of Catholics questioning their faith-- not so much in Christianity but in the institution of the Church. It's great-- performances are amazing-- and I'll pick it to win the Oscar for Best Picture of 2015.