To Mars and Back 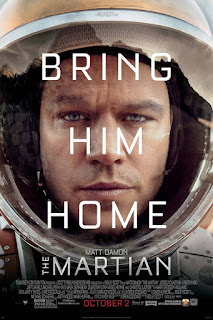 Last year I was very unkind to director Ridley Scott after seeing his utterly dumb and pointless Exodus: Gods and Kings. After this past weekend however, I am glad to say he can still roll out good films. The Martian, starring Matt Damon in an Oscar-worthy performance, is a great movie. In the opening scenes of the movie, a small crew of NASA astronauts is working on Mars, collecting soil samples, etc., when a major sandstorm hits. The team determines that the storm is too strong and will overpower their camp and equipment, so they decide to abandon Mars. In the scramble to the aircraft, Matt Damon's character is struck by flying debris, he is lost in the storm, and presumed dead. The crew takes off.

But of course Astronaut Watley is not dead (you can tell that from the poster above, so I am not giving anything away). Initially he calculates that he has only enough food to survive for a couple of months, but after considering his situation, he says, "I'm not going to die on on Mars." His determination to survive, to get word to his NASA compatriots that he is still alive, to use every tool available to him, and his attitude about clinging to life are inspirational. But not in the typical, Hollywood sappy way. The Martian is surprisingly (intentionally) funny throughout, oozing with sarcasm and great comebacks in conversations during the most intense situations. It was obvious to me that the actors enjoyed working together and found great value in the project.

The movie is being compared to Christoper Nolan's Interstellar in which Damon also plays an astronaut in a supporting role (Jessica Chastain is in it too, but not as an astronaut). That movie, which I also reviewed last Fall, was great as well, but for different reasons. The Martian does not feel like a science-fiction movie. It is not the existential, 2001: A Space Odyssey kind of movie Interstellar is. Everything, well, most everything (it is a movie after all) in The Martian could happen. Do you believe for one moment that NASA could not successfully launch a mission to Mars? Or a series of missions? NASA has goals to send manned space missions to Mars during my lifetime (I was nearly two years old when the last human walked on the moon). In an interesting marketing tie-in, NASA is hoping this movie will generate public support for its own, real-life missions to Mars.

Given the political climate in Washington, who knows whether we will fully pursue the Mars mission. One thing I loved about The Martian was that it is not set in the future at all. There are the usual political interests and conflicts that are part of any space mission, but the idea of a mission to Mars-- or multiple missions-- is accepted and understood to be worthy of our energy, ambition, creativity, and yes, tax dollars. Let's do it!

In a related tangent, I regularly watch Real Time with Bill Maher on HBO. Bill is an avowed atheist and believes people of faith, any faith, are delusional, to say the least. I'm OK with that-- we disagree on many things and agree on many things. I gave up being offended by political comedy long ago. But this past week's episode had a "heavy" science theme to it. "Heavy" brings this clip to mind:

Anyway, Real Time featured Neil deGrasse Tyson and Richard Dawkins debating, proclaiming, and celebrating the achievements of science, including recent news that water actually flows on Mars. Maher and Dawkins constantly berate all religious folk as fundamentalists who question or deny science. Tyson tries to keep us all in check, regardless of religious affiliation (or not) and sees every conversation or controversy as an opportunity to teach and encourage folk to further appreciate the contributions science can offer. Of his many tweets about The Martian, here's a good example that reflects his interests:


The @MartianMovie — where you experience Love, Hate, Envy, Anxiety, Pride, & Heroism, all through the lens of science.
— Neil deGrasse Tyson (@neiltyson) October 2, 2015

Last night in Bible study, coincidentally, we considered the theology of Creation. We explored Genesis 1-3, Hebrews 1, and John 1 and asked: What do we learn about the Creator-- not the creation itself-- through these texts? We threw out words the spoke of God's creative energy and God's joy expressed throughout the creation stories of the Bible. But our biggest learning last night was the idea that God creates from the future, not the past. That Creation, and you and I as active participants in the ongoing creative work of God, are moving toward a future God is orchestrating. All of creation moves toward salvation. In my United Methodist tradition we call this process of renewal and discovery sanctification.

I join in with Maher, Tyson, Dawkins, NASA engineers, astronauts, and other scientifically minded folk in celebrating every new discovery and achievement. I marvel not only in God's handiwork I see in science as a person of faith, but also in humanity's thirst for new knowledge and understanding of the universe. I love the thoughtful problem solving and determination at the heart of The Martian and what, again as a person of faith, I see as humanity's partnering with God in the ongoing creation.


O Lord, our Sovereign,
how majestic is your name in all the earth!


You have set your glory above the heavens.
Out of the mouths of babes and infants
you have founded a bulwark because of your foes,
to silence the enemy and the avenger.


When I look at your heavens, the work of your fingers,
the moon and the stars that you have established;
what are human beings that you are mindful of them,
mortals* that you care for them?


Yet you have made them a little lower than God,*
and crowned them with glory and honour.
You have given them dominion over the works of your hands;
you have put all things under their feet,
all sheep and oxen,
and also the beasts of the field,
the birds of the air, and the fish of the sea,
whatever passes along the paths of the seas.


O Lord, our Sovereign,
how majestic is your name in all the earth!