Star Wars Reactions-- The Morning After 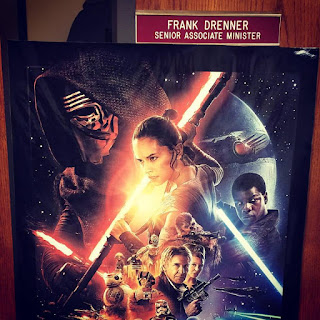 (This poster once graced my office door; it's now in my garage, because it was too distracting. But it was perfect for a time, because my love of Star Wars will always be tied to my name.)

OK, so The Force Awakens is being universally praised, and rightly so. On imdb.com it's currently rated 8.9, ahead of The Empire Strikes Back (8.8) and A New Hope (8.7). Hey, if it has that high of a rating after 30+ years great; but for me nothing will ever exceed Empire. By contrast, Return of the Jedi is an 8.4, and the highest of the prequels' scores was 7.7. I've been tweeting fairly regularly about the new movie over the last week-- everything from counting down the hours to the possible weather forecast (we had no snow).

Popular question: "If you could meet someone famous, who, and what would you talk about?" Stephen Colbert & #TheForceAwakens @StephenAtHome
— Frank Drenner III (@revfrankdrenner) December 18, 2015

OF COURSE @Crdrenner made us #StarWars pancakes and gave us all new tshirts today! 11 HOURS!! IT IS REALLY HAPPENING! #TheForceAwakens
— Frank Drenner III (@revfrankdrenner) December 17, 2015


What you expected something clever and profound today?? Not going to happen! This Yoda Claus was… https://t.co/mFRxKaIqvR
— Frank Drenner III (@revfrankdrenner) December 17, 2015

Anyway, what I want to discuss today is not as much a review of the movie as my thoughts and feelings about what the franchise has meant to me over the years. The first Star Wars came out when I was six. I was nine for Empire, and twelve for Jedi. Literally for at least 10 years of my life, I received Star Wars gifts at every birthday and/or Christmas-- and this tradition continues as an adult, like this Yoda snowglobe. Many of those toys survived the thirty years from receipt to today; my boys played with them when they were little too. Hey, they are toys. I am exclusively a movie guy; no interest in the books, video games, etc. I have used Star Wars references in way too many Bible studies and sermons over the years. And last summer I even wrote about re-writing the six-movie saga with me at the typewriter.

I remember watching The Phantom Menace with Christy in 1999. We went to the UA near Northpark in Dallas (east of Central). I brought some of my childhood action figures in my breast pocket. I remember the excitement before the movie started, and then it slowly bleeding out as the movie floundered. I don't even remember seeing Attack of the Clones in 2002-- which says something about my reaction. I saw Revenge of the Sith at the brand-new cinema in Cedar Hill, and three years later it was different. For one, it's actually good. I was solo-- it was a midnight screening, and Christy was not going to attend with two small kids at home. By the time Obi-Wan says to Anakin, "You were the chosen one!" near the end of the movie, I was weeping. It's a heartbreaking moment to begin with; but I was older, a father, it was nearly 3:00 a.m., etc. I had lost control.

Even after liking Revenge of the Sith, I was reluctant to show the boys the prequels. Yes, I was afraid they would like Jar-Jar. But I also wanted them to experience the hope, joy, and optimism of Star Wars as I knew it. George Lucas has said time and time again that he didn't want to expose kids to the downfall of Darth Vader, so he began the series in 1977 with Luke, rather than Anakin, Skywalker. When he finally did get around to telling the prequel stories, he relied too much on technology and gimmicks. In movies, books, sermons, podcasts, etc., story and audience is what matters. I mean, Serial? Talk about gold.

And this is why I loved The Force Awakens. I'll write an extensive review in a month or so when everyone has had a chance to see it. Without spoiling anything, it's the feeling of the movie that makes it great. Nearly everyone I talked to recently was concerned that I would not like it, but I knew I would; because JJ Abrams and his crew love Star Wars. They were determined to make the movie with actual set pieces and real explosions, not in front of a green screen. My biggest question/hope about TFA: "Would it be funny?" It is. The new characters are great. The familiar characters from the original trilogy are there and make real contributions, not just for nostalgia's sake. It feels like Star Wars. It's the best compliment the movie can receive. Even if you never saw Star Wars or the prequels killed you to the point of never trying again, you will like this movie.

And tomorrow morning I'll share it with the boys. For the first time, they'll see a new Star Wars movie in a cinema (Alamo Drafthouse), and it will feel right. In fact, if I could, I would temporarily relocate the church that now meets in the one-time cinema where I saw A New Hope as a kid and screen it for the boys there: 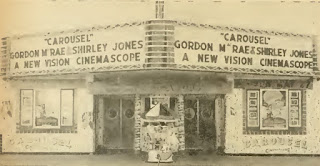 Thanks to JJ Abrams, but also to George Lucas, who gave up his beloved franchise to others, especially the fans.
The Force will be with us, always.