the other day i happened upon a movie i saw long ago but only vaguely remembered: being there, starring peter sellers. peter sellers was a genius, starring in some of my favorite films, from the pink panther series of the '60s and '70s to stanley kubrick's classic dr. strangelove, in the title role. being there was one of sellers' last films, and one that typically receives oscar recognition: think sean penn in i am sam, jodie foster in nell, tom hanks in forrest gump, or dustin hoffman in rain man.

sellers plays a man named chance, a gardener who lives in a wealthy man's townhouse in d.c. we know that he has mental challenges. when the old man dies, he is forced to leave the house and enter a world he has never known: riding in a car, going to the doctor, spending an evening with other people. he has lived a life of simplicity: working in a garden, having meals prepared for him, constantly watching television. he dresses in the old man's tailored suits, the trousers of which are too short, but otherwise fit him well. when he encounters folk in the "real world," because of his clothes and manner he is assumed to have many characteristics we think are becoming increasingly rare: personal responsibility; directness; honesty; compassion. the truth is that these sophisticated folk, including the president of the united states, are incapable of knowing what the audience knows-- whatever "chauncey gardener," as he is mistakenly called, knows comes straight out of soap operas. 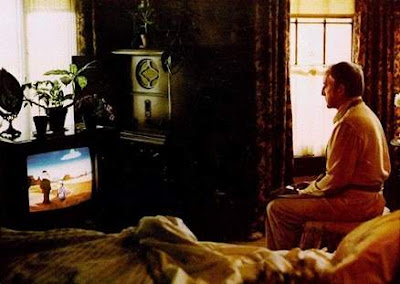 there are many ways to interpret this reality: people are naive; people are desperate for someone who embodies what they consider to be authentic; the wealthy and powerful are just as clueless as anyone else, maybe more so. but there is the gardener, filling holes wherever he goes: a dying man's friend; a president's adviser; a well of soundbites and platitudes for a society without attention spans. one of the myths we like to perpetuate about america is that anyone, given the right combination of luck and skill, can be successful; reality often shows us otherwise. being there argues that luck can be gracious to some, depending on who your friends are.

at the end of the film one of chance's new friends dies and is laid to rest in the family mausoleum. inscribed on the facade is a platitude that could have come from chance himself: "life is a state of mind." sounds alot like "life is like a box of chocolates...!" during the service, chance walks away, more interested in the beautiful surroundings. then comes a scene that absolutely shocked me: he passes a lake, pauses, then walks out onto the water. i stared at the tv in shock. he walked-- not into the water, but onto the water. out to the middle of the lake. he even stopped to stick his umbrella into the water next to him to give us perspective-- the umbrella goes all the way under the water.

is chance Christ? Jesus appeared before the powerful, notably pilate, but was unable to win them over, perhaps because they knew him-- his hometown, his parents, his friends, his religious tradition. throughout the movie everyone who tries to find out about the mysterious gardener is frustrated. is chance a more rooted disciple than peter, who walked on water briefly but began to quickly sink when he became aware of his surroundings? what is chance's purpose? is his attention and counsel a form of salvation for those he encounters? are we to think what the world needs is someone who dispenses wisdom not unlike that found in fortune cookies?

easter is two weeks away. it is the climax of the Christian calendar and experience, when we celebrate what we understand as the truth: Christ's victory over the powers of death and evil and the promise of redemption for those who have faith. for me, that is good news. the world we live in is complex and unpredictable, and i need to believe in something that is larger than it, not just for my own betterment, but also for its transformation: "for God so loved the world that he gave his only Son, so that everyone who believes in him may not perish but may have eternal life" (john 3:16).
Email Post