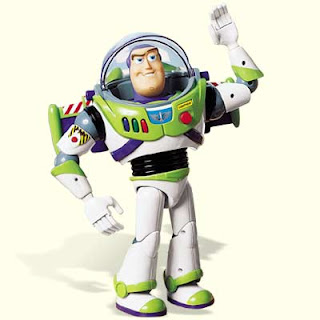 I've been excited all week-- and not just because of VBS!  Today is the day Toy Story 3 will be released.  I have been a HUGE fan of the Toy Story franchise since the first movie was released in 1995.  I still remember the absolute sense of awe at watching a feature-length movie animated on computers.  It did not look animated-- in fact, compared to many other movies released since 1995, Toy Story was, in many ways, the most real.  I'll make it plain for you: for me, Toy Story is right up there with the original Star Wars movies of my childhood.

If you have not seen Toy Story, I have to ask: why not?  It has great characters, inspires laughter and tears, and has a great message about friendship and relationships.  In 1999, Toy Story 2 was released.  As much as I loved Toy Story, I was worried about a sequel; more often than not they are simply made to generate cash, and are void of any of the creativity and spirit of the original.  To my astonishment, Toy Story 2 was not only as good as the first-- it may even be better.  Not since The Empire Strikes Back (1980) could anyone say that!

Last Fall Pixar released Toy Story and Toy Story 2 in 3-D as a way of generating interest in this summer's next chapter.  James and I went together-- the adult too old to cherish Toy Story as a child, and the kid who romped through our house in Buzz or Woody costumes for years.  Honestly, (don't tell anyone), more than a few tears were shed behind the glasses-- the appreciation of the movies, the moment with my oldest son (watching it on screen for the first time) was a little too much for this Tough Guy to handle.  I'll never forget it.

Now there is a third installment, and while I am naturally concerned about the content, I can barely sit still.  This time, not only James and I will go, but also Miles, Christy, and yes: Linus-- his first time at the movies.  Whether the film is any good or not (how can it not be?) it will be a day to remember!  Whoever scheduled it to be released on Father's Day weekend: Thanks.  It's a gift I'll always remember.

The great thing about the first two movies is that for animated films there are so many rich lessons for us to learn from-- adults and kids.  In the first film, Woody, a cowboy doll from the '50s with an old fashioned pull string, is threatened by Buzz Lightyear, the new toy-of-the-moment, who comes with wings and lasers and all kinds of gadgets.  Woody is afraid he will be outcast and does whatever he can to protect what is rightfully his, even at the expense of others.  In the end, he realizes that life is precious and should be cherished always-- even if it doesn't always go according to the plan.

In the second movie, Woody discovers his true identity as a rare toy from a time long gone.  He is reunited with the Round Up Gang, other characters from a 1950s TV show (think Howdy Doody).  They're being sold to a museum in Tokyo, where they will be forever encased behind glass.  As attractive as it is to be famous and know that people are coming from everywhere to see him, Woody realizes that true value comes from being loved by a child and having real friends.  He decides to stay home, knowing Andy, his beloved owner, won't play with toys forever.

I don't know yet what rich lessons the third movie will have, but the first two have enough for a long sermon series: getting ahead is never the most important thing, relationships matter, dubious decisions have consequences, you can't change the past and clinging to it isn't very helpful either, seize the day and live it to the fullest, etc.  Life lessons.  For those outside of the church it's good to know there are still places to hear a helpful message.  For those of us in the church, we can be confident and proud that our children-- and adults-- are learning life lessons every day through the power of the Gospel and the working of the Holy Spirit.  And that will never end: as one of the daily VBS themes reminded us: "Love never fails" (1 Corinthians 13:8a).  Or as Buzz Lightyear would say, love endures, "To Infinity and Beyond!"
Email Post