yesterday i had a great day off.  after a wonderful breakfast, i went to the cinema for a double feature: moneyball and drive.  drive i knew nothing about, except that after seeing crazy stupid love i became a ryan gosling fan; moneyball, on the other hand, was a book by michael lewis, which i read several years ago.  as a baseball junkie, i was fascinated by the idea that baseball could be remarkably predictable: formulas and calculations, not the physical or psychological cliches we hear about during every game, would determine which players were successful.

after the 2001 season, the a's lost some key players to richer teams.  they decided to overhaul their system of player evaluation and development.  they wanted players to walk more-- on base percentage (obp) was their most important statistic, not home runs or batting average.  they were not interested in avoiding errors (the book argues against the use of the term "error"-- why does a moral term like that belong in a sport?).  no bunting-- that's giving away outs.  no stealing-- the risk of getting an out is not worth the reward of getting to second base.  if the guy hitting behind you walks you'll end up there anyway.  and let's put an end to useless stats like batting average with two out (there's no statistical reality to the cliche known as "clutch hitting"). 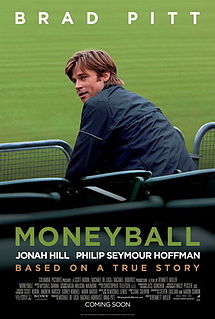 i read a review of moneyball written by keith law, a baseball guy.  he calls the movie a "mess"-- but he writes about it from the perspective of a baseball guy, not a moviegoer.  he points out no general manager would fly to another city to discuss a possible trade, and of course he's right.  it would be over their third arms, their mobile phones.  but that meeting in the movie does not take place to discuss a possible trade-- it's to introduce the a's g.m. to an analyst for the indians.  this guy later becomes the a's assistant g.m., and the architect of the new philosophy.  in other words, the whole meeting is a plot device.  it doesn't matter if it would actually happen that way.  law also does not like the way scouts are portrayed, certain players, etc.  but this is not a documentary, and it's not even really a baseball movie-- unlike, say field of dreams or bull durham or the natural.  to review the movie as not understanding baseball culture correctly is to miss the point.

as i watched moneyball, i was reminded of the social network (same writer-- aaron sorkin).  for one thing, my initial reaction to both films was the same: why are they making this into a movie again? facebook is a good thing and everyone loves it, but do we need to know mark zuckerberg better?  moneyball is an interesting way to dig deeper into baseball, but is it a movie-worthy story?  people reacted similarly to the social network as keith law did to moneyball.  what it says about zuckerberg or any other character was not accurate.  but that's not what we have movies for, is it?  we're looking for a story.  the social network was great not because it was a biography-- it was interesting because the guy the film suggests is socially awkward (doesn't matter if he really is or not-- it's a movie) created a network for people to be more social.  moneyball isn't about the sport of baseball as much as it is the thinking behind it.  and the man behind the machine.

billy beane was then, and still is today, the a's general manager.  he is a former major league baseball player. in the film he relives the moment he signed his big league contract over and over again.  we see pictures of him as a kid in a baseball uniform over and over.  he craves solitude.  he refuses to watch the team play.  he constantly eats and exercises.  he is a classic "type a" personality.  he is devoted to his daughter.  the more you get to know the guy, the more a movie makes sense.  he is a visionary.  he has to adapt to financial constraints that do not exist for other teams. the oakland a's 2002 payroll was under $40 million, compared to the Yankees' of $140 million, but they still made the playoffs. in fact, the team won one more game with the cheaper players. this year the a's payroll is $65 million, 21st among the 30 mlb teams.  they'll finish the season, which ends tomorrow, 73-89 give or take a win or two, in third place.  they have not made the playoffs since 2006.  while it is true the a's have not won a world series under the moneyball philosophy, the boston red sox, who hired the guru of modern baseball statistical analysis, bill james, years ago, won titles in 2004 and 2007.  they still have a pulse for the final playoff spot with two games to play.

as a rangers fan, i could not be more excited and impressed with the team's performance the last two years.  last season they made the world series but lost; this weekend they begin another playoff run.  they've done this without an enormous payroll: $91 million, which ranks 13th out of 30th.  ten years ago, the rangers payroll was higher than that-- yet they lost every year. the rangers, now under new leadership, have adopted some of these processes, but not others.  ron washington, the rangers' manager, was the third base coach for the a's during the moneyball years (he's in the movie, always referred to as "wash").  but washington gives his players free reign on base stealing, and calls on them to bunt often.  personally i agree with moneyball's stance here.  bunting is rarely effective, and basestealing, while exciting, has significant risk to it.

the movie is excellent.  brad pitt, who produced the film as well as stars in it, is great.  it's funny, witty, and thought provoking, even if you're not a baseball fan.  it was very absorbing.  many people in the auditorium  cheered as the a's won their record 20th straight game in the '02 season.  i have always been attracted to visionary type people, who reinvent the system in new, challenging, sometimes threatening ways.  billy beane is certainly that. if i weren't a rangers fan and the a's were not our rivals, i would root for beane to get his ring.
Email Post