Kickin in the Doors

I grew up a Houston Oilers fan, and as such I hated the Dallas Cowboys. When I was a kid, The Oilers were coached by the loveable, Texas cliché Bum Phillips, father of former Cowboys coach Wade Phillips.  The Cowboys, on the other hand, were coached by the stoic Tom Landry. The Oilers in the late 1970s were a powerful team, led by football legend Earl Campbell.  As much as I disliked the Cowboys, I really hated, and still do this day, the Pittsburgh Steelers.  Every year they seemed to knock my team out of the playoffs. After one such defeat, the Oilers returned to the Astrodome, packed full of adoring fans, holding signs which said, “Luv ya blue.” Bum Phillips was handed a microphone and he uttered these words in the thickest Texas accent one can imagine:

"Last year we knocked on the door. This year we beat on it. Next year we're going to kick [it] in." 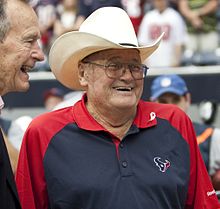 The [it] replaces the more colorful words used by Coach Phillips. Unfortunately the Oilers kicked nothing in again the next year.  After several heartbreaking playoff defeats, their owner, Bud Adams, to this day still hated in South Texas, moved the team to Nashville where they became the Tennessee Titans.  They actually made it to the Super Bowl in 2000; you can guess what happened.

Upon becoming a father I faced a difficult decision: we lived in Dallas. Houston received a new NFL franchise, the Texans, but come on, how does one follow another Texas team in Cowboys country? There was no way I would cheer for the Titans after they abandoned Houston.  So I adopted the Cowboys. It’s been a painful decision! They have not won a Super Bowl since—blame me if you want. Now it’s the Cowboys, every year, saying, "Last year we knocked on the door. This year we beat on it. Next year we're going to kick [it] in." And so we wait until next year. And the year after that.

Join us this Sunday, October 23, as we make our commitments for next year. We’ve talked over the last several weeks about doors we face.  They are opportunities. Jesus said, “Ask, and it will be given to you. Search, and you will find. Knock, and the door will be opened for you” (Matthew 7:7-8). There’s nothing there about kicking in the door—no need for a violent reaction. Something on the inside invites us inside. There’s an excitement there. We want to see what is behind the door.

This Sunday is Commitment Sunday, where we dedicate our lives and resources to God for another year in ministry at Oak Lawn. Take some time with family this week to discuss the percentage of your income God is calling you to give next year, and come ready to share that in a private moment of prayerful celebration in worship. We’ll hear more about the door each of us faces, and toward the end of the service we’ll have an opportunity to literally step through a door, symbolizing newer, deeper, more committed relationship with God. We will leave the worship excited about new possibilities offered by a God who loves us, who calls us to enter the door, and who sends us out the door to serve. 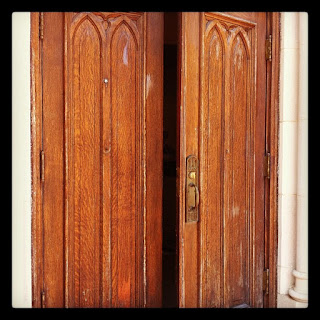