check your cliches at the door

ok, so it's november, meaning two things: the weather is officially amazing (we woke up to a 60 degree house this morning!), and it's time to roll out the thanksgiving cliches. someone discovered this poster published by nordstrom in 2007 and it began to pop up all over facebook: 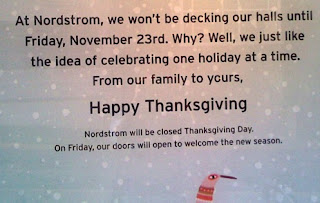 someone even said on a friend's wall: "if that's true i am definitely shopping there for Christmas!" and the cynic in me said, "kudos to nordstrom's marketing team!"

now, don't get me wrong: i love thanksgiving. it is my favorite holiday. if you have attended any church i have served you've heard me speak of the "three f's" of thanksgiving: food, family, and football. it's simple, little stress, and great fun. but here's the deal: why does it bug us so much for Christmas stuff to go on display in late october or early november? this and its cliche cousin about the commercialization of Christmas go hand and hand this time of year. but hold on for a second.

Christmas has feelings associated with it-- even for non-church folk-- of joy. yes, retailers anticipate the season all year, but i don't hear anyone boycotting the wall street journal when it begins to publish stories about that fact (yes, that article was dated october 10-- shocking!).

is it such a bad thing if Christmas stuff brings a little joy in october and november? these are both great holidays-- let's celebrate both of them, but do they have to be confined to their respective months? what are we defending again? does Christmas really need the cliche police to protect it? the "naughty list" sermon series, the "war on Christmas" stuff... that can be stored away with the halloween decorations. if our excitement makes either holiday come faster, is that such a bad thing? just please do not start getting excited about the coming of summer. i may have to start a campaign against the commercialization of the sun.