When most people think of Steven Spielberg's classic Saving Private Ryan (1998), they think of the brutal first twenty minutes of the movie, a re-enactment of the storming of the beaches of Normandy on D-Day. When I think about the movie, I remember its bookends-- the first and last scenes of the movie. Both take place at the Memorial Cemetery at Normandy, where an elderly man kneels at the grave of a man called Captain John H Miller. 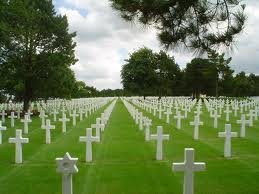 The story of the movie is about a desperate search for Private James Ryan (Matt Damon), whose three brothers have been killed in combat. The War Department dispatches a crew of excellent soldiers to find Ryan, to make sure his mother does not lose all of her sons in war. The group of soldiers is not pleased with the assignment, which will be very dangerous. Ryan is in at unknown location far behind enemy lines. After a long struggle they find him, and he is resistant to go-- why should he be so special? Why should he be the only one to go home? Near the end of the movie, Capt Miller (Tom Hanks) is dying. He pulls Ryan to him, and whispers these words: "Earn This." Here's a clip from the movie There are a couple of bloody shots here, being war and all.

Flash back to the cemetery again, and Ryan, now a grown man, is surrounded by his wife, his kids, and grandchildren. He kneels at the grave of Capt Miller and weeps. His wife consoles him, and he says, "Tell me I have been a good man." For the last sixty years, Ryan has carried the burden of the sacrifice these men made on his behalf. The words, "Earn This" are etched on his soul. Has his life been worthy of the sacrifice?

We began a message series weeks ago at the beginning of the Season of Lent called "Forgive." God forgives us our sin, allowing us to step in to a new life, free of guilt and shame. Jesus commands us to forgive those who have hurt us. Now we end on Good Friday, reflecting on Jesus' words from the cross: "Father, Forgive Them" (Luke 23:34). These are the words Jesus speaks as he looks down from the cross upon those in the crowds who insult him. His grace and love are so powerful that at the moment of total suffering and abandonment he is able to forgive. He does not say to them, "Earn This." He could have. It would have been easy. But it would have left us with a burden similar to Ryan's from the movie. We would face the cross this, and every, Good Friday, and say, "Tell me I have been a good person." We would have longed to hear that we were indeed worthy of such a sacrifice of love. But Jesus would have us to live free of guilt. We cannot earn God's love and forgiveness anyway. It is offered to us freely as a gift. We can accept it without guilt or shame.

There is more. As disciples of Jesus we seek to grow into his very image, to be the kind of people who can face such hate with radical love. "But I am not the Christ," you say. Right. But consider the story of a disciple, an ordinary person just like you and me, who faced similar suffering to Jesus-- and responded as Jesus did. Stephen was not one of the apostles-- his ministry was not preaching-- he was a servant who looked after the needs of people. He also had a tremendous faith and was not shy about it. When the religious folk began to insist that Stephen be silent, he refused. He was forced beyond the city gates and people began to throw rocks upon him. As he lay there dying, he said, "Father, do not hold this sin against them" (Acts 7:60). Stephen prays for those who persecute him. His faith makes this possible. And if it was possible for Stephen, it is possible for us.

What rocks have been thrown your way recently? Who threw them at you, and why? What can you do with the hurt it caused in you? We can respond with violence, lashing out at those who hurt us. We can hold on to the burden of anger and allow it to become a bitterness that plagues us our whole lives. Or we can say, "Father do not hold this sin against them." We can, and must, summon the courage to look upon those who persecute us with forgiving hearts.

You have been forgiven. At the cross, Jesus considered human sin. Instead of saying, "Earn This," sentencing us to a life of guilt and shame, constantly wondering if we can live up to the sacrifice, Jesus interceded on our behalf. Looking at our sinful hearts, he prayed to God, "Forgive." May we live our lives in the way his life ended: with grace, love, and forgiveness.