The Circle Is Now Complete 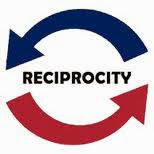 Last Sunday everyone studied the same material in Custer Road's small groups and Sunday schools: a stewardship lesson I wrote on Paul's use of the word charis in 2 Corinthians 8 & 9. Here are some highlights from that lesson, as well as a real world example of life application. Central to the lesson is the idea of reciprocity. In Paul's world, as well as our own, this was an important concept. You do something for me, I do something for you. From a Christian perspective it's God does something for us, we do something for others. Reciprocity.

In 2 Corinthians Chapter 8 and 9, Paul gives us some of the New Testament’s most profound teachings on generosity and giving. One of his goals in ministry is to honor the legacy of the Jerusalem church, founded by the original apostles, who empowered him to be an apostle. Paul’s ministry was focused on Gentiles (non-Jews), while the ministry of the original apostles was primarily focused on Jews in and around Jerusalem. So Paul encouraged his fledgling congregations to contribute to a “generous undertaking” (2 Cor 8:6) for the Jerusalem mission. Some of his smaller, less affluent churches had already contributed—but the Corinthians, a larger and wealthier group, had not yet joined. Paul uses the Greek word charis, usually translated “grace,” throughout his plea to motivate the Corinthians to increase their generosity. Paul uses charis in Chapters 8 & 9 several times. Briefly read each verse and search for the word. It is variously translated as “grace,” “generous undertaking,” “privilege,” generous act,” “thanks be to God,” “blessing,” and “thanks” (2 Corinthians 8:1,4,6,7,9,16,19; 9:8,14,15). Let's rewrite the text using grace for charis each time. And look for the theme of reciprocity.

We want you to know, brothers and sisters, about the grace of God that has been granted to the churches of Macedonia; for during a severe ordeal of affliction, their abundant joy and their extreme poverty have overflowed in a wealth of generosity on their part. For, as I can testify, they voluntarily gave according to their means, and even beyond their means, begging us earnestly for the grace of sharing in this ministry to the saints— and this, not merely as we expected; they gave themselves first to the Lord and, by the will of God, to us, so that we might urge Titus that, as he had already made a beginning, so he should also complete this grace among you. Now as you excel in everything—in faith, in speech, in knowledge, in utmost eagerness, and in our love for you—so we want you to excel also in this grace. I do not say this as a command, but I am testing the genuineness of your love against the earnestness of others. For you know the grace of our Lord Jesus Christ, that though he was rich, yet for your sakes he became poor, so that by his poverty you might become rich. And in this matter I am giving my advice: it is appropriate for you who began last year not only to do something but even to desire to do something— now finish doing it, so that your eagerness may be matched by completing it according to your means. For if the eagerness is there, the gift is acceptable according to what one has—not according to what one does not have. I do not mean that there should be relief for others and pressure on you, but it is a question of a fair balance between your present abundance and their need, so that their abundance may be for your need, in order that there may be a fair balance. As it is written, “The one who had much did not have too much, and the one who had little did not have too little.”

But grace be to God who put in the heart of Titus the same eagerness for you that I myself have. For he not only accepted our appeal, but since he is more eager than ever, he is going to you of his own accord. With him we are sending the brother who is famous among all the churches for his proclaiming the good news; and not only that, but he has also been appointed by the churches to travel with us while we are administering this grace for the glory of the Lord himself and to show our goodwill.

The point is this: the one who sows sparingly will also reap sparingly, and the one who sows bountifully will also reap bountifully. Each of you must give as you have made up your mind, not reluctantly or under compulsion, for God loves a cheerful giver. And God is able to provide you with every grace in abundance, so that by always having enough of everything, you may share abundantly in every good work. As it is written,
‘He scatters abroad, he gives to the poor;
his righteousness* endures for ever.’
He who supplies seed to the sower and bread for food will supply and multiply your seed for sowing and increase the harvest of your righteousness.* You will be enriched in every way for your great generosity, which will produce thanksgiving to God through us; for the rendering of this ministry not only supplies the needs of the saints but also overflows with many thanksgivings to God. Through the testing of this ministry you glorify God by your obedience to the confession of the gospel of Christ and by the generosity of your sharing with them and with all others, while they long for you and pray for you because of the surpassing grace of God that he has given you. Grace be to God for his indescribable grace!

Last week I noticed that my gift to CRUMC was placed in my box, not the Financial Officer's. Hmmm. This presented an occasion for debate: I had given the gift online, yet the check actually came back to me-- a mistake by the volunteer who distributes mail. So was the gift already given in spirit? Could I just tear up the check and think of it as an act of reciprocity? To top all this off, Teresa Stroup, our Financial Analyst who processes checks, and her husband David happened to be in this exact lesson last Sunday. When I mentioned the check sitting on my desk, she said, "Yeah, I haven't seen it." I gave it to her yesterday, I promise.

Preaching and teaching on Christian stewardship isn't a very popular task for the church and its preachers, which is unfortunate, because the Bible spends an inordinate amount of time and energy trying to educate us. And yes, worship attendance was down a bit last week. I, for one, love teaching and preaching about stewardship, and I appreciated very much Kory's sermon and leadership in sharing his own experience and understanding of Christian giving. As Paul shows us above, grace not only comes from God, down some sort of cosmic one-way street. He uses charis at least hour different ways to illustrate this: