Why I Am Sad Stephen Colbert is Leaving 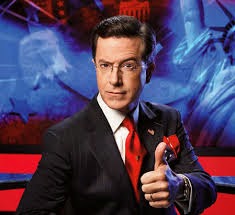 News broke yesterday that the great Stephen Colbert will replace David Letterman when the legend retires next year. CBS was quick to reach out to Colbert to fill this huge vacancy, and you know executives are thrilled with the possibility of Colbert's large under 30s demographic following him. I have not watched "late night TV" (Johnny Carson/David Letterman/Jay Leno/Arsenio/Conan/etc.) regularly since I was in high school, and yes, I've been out of the under 30s demographic for a handful of years. That being said, I am a devoted follower of The Daily Show and The Colbert Report. You'll know by now that Colbert spun off the Daily Show in '05.

Stephen Colbert is a unique talent, and CBS is right to be thrilled at the hire. He will do well, and I will almost certainly follow Stephen. But I am concerned for the move. The switch from cable to mainstream will certainly impact the content on the show. What I love about The Colbert Report is not its frequent language, but the attitude. Stephen's "character" is a conservative political pundit a la Fox News, but the real Stephen Colbert is always near the surface. Colbert is a devout Catholic, and his unique understanding of Catholic theology informs his commentary. Here's a recent example, Stephen commenting on Tennessee's shortage of death penalty drugs (the Catholic church, as well as the United Methodist Social Principles, oppose capital punishment). Throughout his series, Stephen has offered commentary that has been thoughtful, though sometimes sharp-edged. I tried to find a link to my favorite all-time Colbert "sermon," where Stephen commented on the lack of challenging leadership during the recent Iraq war. Recalling how civilian Americans made numerous sacrifices during WWII (rationing, etc.), he mentioned there had been no calls for sacrifice this time around-- not even in taxes to pay for the war effort. I'll never forget this line: "We are sacrificing the idea of sacrifice."

One of the most important roles of the preacher is to be prophet-- being willing to speak a difficult word to the people as one feels called by God. Often these "stepping on toes" sermons are not popular-- so preachers are reluctant to preach them. Sometimes the reluctance even goes to the point of the preacher tuning out-- no longer hearing such messages from God. Our churches have, for the most part, lost the art of prophetic preaching (not talking about this kind of junk, by the way)-- in the sense of offering God's perspective on current events.

So good luck, Stephen, and congratulations.

Whatever Colbert's Late Show will look like, I hope he brings some of his commentary with him. Stupid Human Tricks and Top 10 Lists were great for David Letterman, but Stephen needs to bring his own style. And we need to hear his messages. Even when we don't want to.
Email Post