Today was, obviously if you have a Facebook account, the first day of school. Not only was it that for our boys, but it was another first day in a new school. We've had all summer to contemplate this day, since we made the decision to buy a house in Allen. We tried to comfort James with the reality that every other 7th grader would be new at the school too, but of course many of them have previous relationships from other schools. Thankfully James has some church friends there. This will be Miles’ (4th grade) fourth school, and Linus (2nd) second school. Yeah, we are hoping for some school stability! I was excited to hear first day reports—including James’ first experience riding the yellow dog to school—and the good news is everyone had a good day.


Christy and I recently watched Boyhood, the new film from director Richard Linklater. You may have heard about because of its unique nature. Richard Linklater spent twelve years filming two actors, one of whom was his own daughter. The movie stars Patricia Arquette and Ethan Hawke as the kids' divorced parents. The kids are played by Lorelei Linklater and Ellar Coltrane. Again, let me say: the kids were not professional actors. Nor are they replaced by other actors as they grow up over the twelve years. Their hair grows longer, is cut off, or colored. Their bodies grow taller. Over nearly three hours, you literally watch them grow up from elementary age to college.  And you thought your kids were growing fast! We bond with them immediately, sharing their concerns and sorrows as they move from place and school to new territories. Yet the most significant bond, between parent and child, remains, despite the lack of structure and constant change.

That I saw this movie right around the time our boys faced more transition in their lives was interesting. And insightful. And encouraging. It's an amazing movie, and I hope it's remembered by Oscar next year. 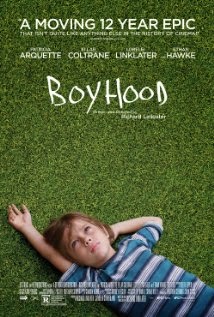 What's astounding about the movie is the level of commitment and investment that was necessary. Ellar's parents made the huge commitment for him to be available throughout the span of filming. I even read there was an agreement that if Richard Linklater died during production Ethan Hawke would take over as director. What kind of commitment and resources does it take to maintain these relationships for twelve years?

Twelve years-- the entire span of my oldest son's life. Think of the changes in your own life since August 2002. Twelve years ago Christy lived in Irving, my Pez collection was still small enough to be allowed in my home, and I was still learning how to change diapers. Twelve years ago I did not own a mobile phone. Those twelve years ago do not feel like they swooshed by-- believe me, James is a long way removed from infancy.

This is not meant to be one of those "they grow up so fast" first day of school reflections, and it is not meant to inspire guilt as I reflect on the sometimes poor choices I have made as a parent.

I'm thinking instead of looking backward with gratitude and forward with expectation.

I've always thought time worked differently on me. Last night we pulled out my old yearbooks from junior high and high school to show the boys some of my experiences. This was me in seventh grade: 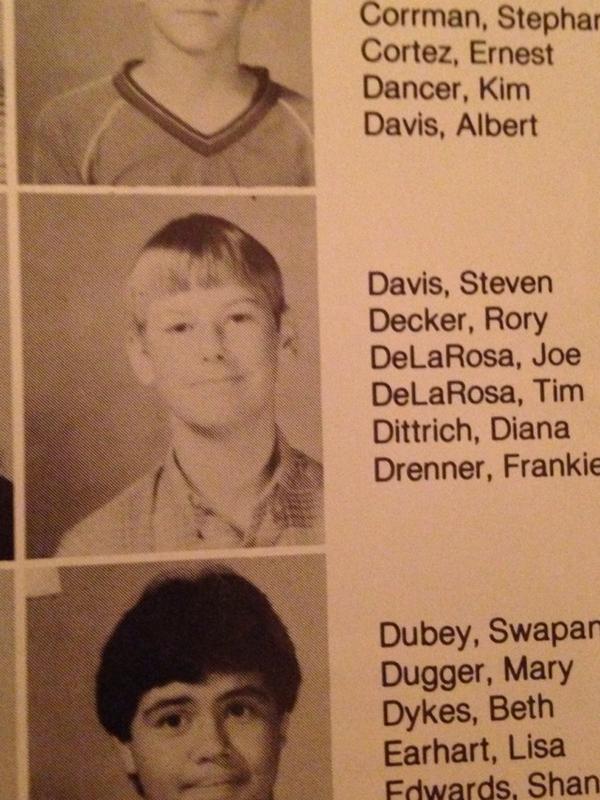 We're talking 30+ years ago. But they do not seem like that far away-- or like it was recent. It's more like a parallel, different lifetime. Those days when the boys were babies or playing on a soccer team for the first time... it doesn't feel like yesterday. People have always said time goes faster as we age, but I'm several lifetimes older than that blonde kid with the bowl-like haircut now and things seems to go on the same pace they always have. Someone said to me once that it means I live in the moment. Maybe so.

This morning I woke up early, probably because of the excitement of the day. I went outside because I left my phone in my truck. As I walked out into the pre-dusk morning, I was astounded by the stars. Having lived in Dallas the last three years, I had grown accustomed to only seeing nighttime stars when I visit my hometown. This morning was the first time I was awake enough-- literally or metaphorically-- to see them in the Allen night sky. It took my breath away. I spent several minutes out there in my driveway, my neck craned to the heavens. I downloaded one of those star map apps and checked out the different constellations. I wondered at the quiet beauty as the stars sparkled in the sky. And I felt the presence of God in a very familiar way.

Because God is mindful of us. And God has a similar way of looking upon us as we look upon our growing children. Without regret. Filled with anticipation. Infinitely more loving and searching than we can muster. Or comprehend. That holy moment was what I needed-- and it seemingly happened by accident. Seemingly.

So celebrate and appreciate your growing kids, not because they grow too fast or because you want to make up for lost time. Embrace them, and your moments with them, as holy, because that is what they are. And may all of us live our lives with joy and thanksgiving for the great privilege to be parents or grandparents or uncles and aunts or mentors or Sunday school teachers or whatever role with have with children as they grow under our-- and God's-- care.
Email Post