Would You Go Back?

I've been reading a new Stephen King book this week: 11-22-63. It's about a teacher in Maine who lives in 2011. His friend Al discovers a rift in time, which transports him to 1958. Every time Al travels to the past he arrives on the same date, in the same place. No matter how many times he goes back, it's always the same. When he returns to 2011, only two minutes have elapsed. Al starts to think about changing the future in a major way-- what if he stopped Lee Harvey Oswald from assassinating President Kennedy? Would the Vietnam War still happen? Could he save millions of lives by stopping one murder? One thing Al learns: every time he journeys to 1958 and changes one little, or major, thing, it effects the future in some way. But when he goes back to 1958 again, everything resets to how it was before. The book was recently made into a TV series on Hulu.

When Al becomes ill, he convinces his friend Jake, a school teacher, to go.  Jake takes up the mission to save JFK. He travels to 1958 and finds his way to Dallas by 1960. He settles in a small town near Ft Worth, gets a job teaching, falls in love, all while waiting for 11/22/63. He continues to track Oswald based on his own knowledge of history and his buddy Al's notes. I have about 10% of the book to go. It's an interesting idea, but not one of King's best.

This week I participated in a celebration of my 15th year of ministry as an Elder in the United Methodist Church. I was ordained a Deacon in 1998 (it was a sort of probationary step then not a separate order as it is today), and Elder in 2001. I was a member of the Texas Conference, and transferred my membership, as folk do in local churches when they move, to North Texas in 2002. Before I was ordained, I remember a mentor saying to me, "Think of ordination as a gift." It has been just that-- I am thankful for everyone, from Christy and the boys, to my family, colleagues, and churches I have served, for the privilege. 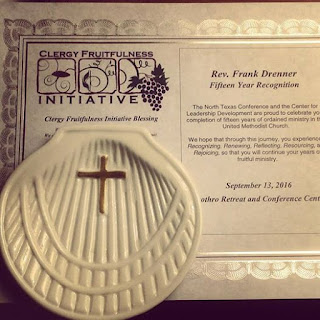 But of course I have made many mistakes along the way. Some minor, and some more serious. What if I discovered a time-travel vortex at the park one morning while walking the dog? If I could go back in time to change things, would I do it? And what impact would it have in others' lives?

I said in a sermon recently that God does not lead us into the past, but into the future. God calls us to leave behind those past failures and walk into newness of life. God's grace leads us to where we should be going. Sometimes it is tempting to want to go back. Some of you lived in 1958, and you miss those sights and sounds. Others wouldn't go back to 1958 under any circumstances-- as great and romantic as it was for some, it was also a time of Jim Crow, segregation, and oppression for others.

I'm rooting for things to turn out well for Jake, but I hope he doesn't keep returning over and over again to set every little thing right. I'm not sure yet if the story ends for him in 2011 or 1963, just as I was unsure about my own story in 2001 or now in 2016. Wherever we are in time, keep going forward. At the retreat, I prayed with a buddy who pastors a church at a significant crossroads-- they have one foot in the past, one in the future. I hope they go into a future willingly, and with confidence, knowing that God goes ahead, urges all of us onward:


Therefore, since we are surrounded by so great a cloud of witnesses, let us also lay aside every weight and the sin that clings so closely, and let us run with perseverance the race that is set before us, looking to Jesus the pioneer and perfecter of our faith, who for the sake of the joy that was set before him endured the cross, disregarding its shame, and has taken his seat at the right hand of the throne of God (Hebrews 12:1-2).
Email Post