I've heard from several of you this morning that you did your daily Bible reading this week. If you were not here last Sunday and have been out of touch with the church, we're reading Matthew during Advent, four chapters a day. It's 28 chapters long so we are completing the Gospel in a week-- four times before Christmas. I'm always surprised when I read the scriptures, even familiar ones, and this week I was struck by the relations Jesus had with the religious leaders of the day. Over and over again throughout Matthew, and the other gospels as well, Jesus is fighting with the Pharisees and others.

The scribes, Pharisees, Sadducees, and other religious folk were lay people with specific spiritual training and practices. They were not, as they are often portrayed, evil people. And they are never meant to reflect the religious practices of all Jews during Jesus' lifetime. They were fundamentalists who pointed out the spiritual failings of others. That's not a good thing to do, but at least their intentions were good. They were overly religious. We become religious when we are more concerned with the actions of others than our own. We become religious when we perform the duties of our faith as a sort of check list. The last thing Jesus wanted was to found another religion. He doesn't want us to be religious; he wants us to be faithful. This is at the heart of his conflict with the Jewish leaders.

Something spiritual was happening during Jesus' lifetime. Jesus warned his followers many times to beware of false messiahs. John the Baptist was part of that revival. He had his own disciples and following. His ministry was about preaching repentance-- our need to confess our sins, hear God's word of forgiveness, and commit to live a new life. To repent literally means to make a U-turn-- to go in a different direction. And people were hearing John's message. They came from Jerusalem, Judea, the area of southern Israel, and the area around the Jordan River. They came to be baptized. In today's text we see that even the religious leaders heard that call and responded-- not in judgment and condemnation, but in humility.

John greeted them harshly, calling them snakes: "You brood of vipers, who warned you to flee from the wrath to come? Bear fruit worthy of repentance. Every tree that does not bear good fruit is cut down and thrown in the fire" (3:7, 10). He warned them not to take solace in their tradition: "Do not assume to say to yourselves, 'Abraham is our ancestor,' for God is able to raise up children of Abraham from these stones" (verse 9). In other words, God wants us to live in such a way that our lives reflect what we believe. We cannot assume that because we are good Christians that we are somehow insiders and don't have to change our lives. Jesus wanted his followers to be faithful, and our actions to match our belief. All through Matthew Chapter 23 Jesus rails against the hypocritical Pharisees and religious folk. They, and all religious know-it-alls, point out the faults in others, but they do not do the necessary internal work of repentance and new direction.

Here are a couple of examples from Matthew of Jesus speaking about the relationship between faith and action: "Not everyone who says to me, 'Lord, Lord,' will enter the kingdom of heaven, but only those who do the will of my Father in heaven. On that day many will say to me, 'Lord Lord, Did we not prophesy in your name, and cast our demons in your name, and do many deeds of power in your name?' Then I will declare to them, 'I never knew you; go away from me, you evildoers'"  (Matthew 7:21-23; my emphasis). Only those who do the will of my Father... Or Matthew 15:8-9: "This people honors me with their lips but their hearts are far from me; in vain do they worship me, teaching human precepts as doctrines." Correct, right, religious beliefs alone are not enough. You'll end up like the religious leaders, pointing out the faults in others. It's the old saying about when you see yourself as a hammer everyone else becomes a nail. Our actions must reflect what we believe.

I found this prayer from St Augustine, one of the great church patriarchs. Listen to how he searches for God:

I came to you late, O Beauty, so ancient, so new. I came to you late. Look! You were internal and I was external, running about in my ugly fashion, seeking you in the beautiful things you made. You were with me, but I was not with you. Those things kept me far from you, even though if they were not in you, they would not be at all. You cried and called out and you broke open my deafness. You gleamed and shone and chased away my blindness. I breathed in your fragrance and pant for more. I tasted and now hunger and thirst. You touched me and I burn for your presence. 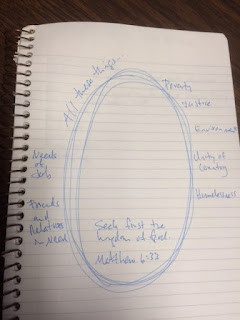 As I was preparing for worship this morning, just before we started my microphone wire was tangled. It took a few moments to get it right. And I thought: this is a metaphor for my life, and for many others during this time of year. We are all tangled up. But the work of untangling can be a spiritual discipline. Slowly, quietly, during Advent we untangle ourselves, preparing our hearts and minds for Christ's coming.

O God, whose will is justice for the poor and peace for the afflicted, let your herald's urgent voice pierce our hardened hearts and announce the dawn of your kingdom. Before the advent of the One who baptizes with the fire of the Holy Spirit, let our complacency give way to conversion, oppression to justice, and conflict to acceptance of one another in Christ. We ask this through the One whose coming is certain, whose day draws near: your Son, our Lord Jesus Christ, who lives and reigns with you and the Holy Spirit, one God, for ever and ever. Amen.
Email Post