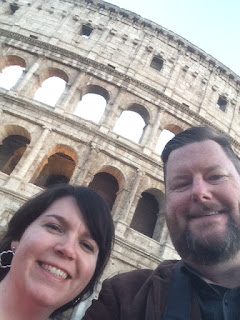 Last Friday Christy and I pulled in to Termini Train Station in Rome, the last city we would visit on our 20th anniversary trip to Italy. I was very excited. I have wanted to see and walk through ancient Rome since I was a kid. The Colosseum, The Forum, pagan temples, ruins, etc. But as we arrived I confronted another emotion: paranoia. I had heard so much about pickpockets before we left. Any time we were around people I felt like someone was targeting me, the giant American tourist.

This sensation was in the back of my mind the entire trip. Throughout the week I wore a small pouch, I called it my "Joey," like I was a momma kangaroo, under my shirt. It housed our cash, passports, credit card, bank card. Now in the swarm at the train station, rumored to be Pickpocket Danger Area #1, I found myself checking out everyone in the place. Christy needed to make a pit stop, so I found the most secure place to wait: against a wall, our two rolling bags, a camera bag, and a backpack close to me. I was a secure fort in the middle of the chaos. I suspected everyone who stopped to look at the map next to me was trying to rip me off.

Then I had a random thought.

I was reminded of our country's evolving immigration and foreign travel policy. Twice now efforts to limit who can travel to America from a handful of countries have been ruled unconstitutional. I've been critical of these efforts from the beginning from a faith perspective. The Bible is very clear that the foreigner should be welcome and cared for. But now in this busy train station I found myself somehow synched to the underlying fears of the travel/immigration bans: when we assume everyone is a threat in effort to ensure our own safety, we make ourselves crazy.

Yesterday the area around Parliament in London was attacked by a terrorist. He was not a refugee, and he was not from a predominantly Muslim country. He was a Muslim born in Britain and radicalized there. Several people have died and others are injured. I have an emotional connection to England as Christy and I lived there seventeen years ago and have many dear friends. Plus a couple from Grace was visiting London very close to where the attack happened and I was concerned for them and others. I spent much of yesterday refreshing my social media feeds to learn more information. I tweeted out my own thoughts and I re-tweeted a prayer from the London District of the Methodist Church:


The London District offer prayers for all those who have died and who have been injured after the events in Westminster; pic.twitter.com/3kJNEh4U2S
— London Methodists (@LondonMethodist) March 22, 2017


Twitter being what Twitter is, it became a place of immediate response, assigning blame everywhere, wanting to go to war, to repay evil for evil. As much as terrorism is a part of our lives, so is our need to express our outrage. I feel it too. When expressed in a mature way it can even be healthy (not being hateful, stereotyping.. and yes, paranoid). The British are actually great models for this. Today Parliament is back in session. London is not on lockdown. New policies are not being enacted as a response to terror. We move forward. Unafraid.

Last night at Bible study we discussed the "Cleansing of the Temple," one of the few stories remembered in all four gospels. Mark sandwiched that story with another one about a fig tree Jesus passes as he walks from Bethany to Jerusalem. Jesus is hungry, but the tree has no figs-- it's out of season. Jesus curses it (Mark 11:12-14), and after returning from the Temple Peter notices that the tree is withered (verses 20-25). Peter asks about the tree. Here's what Jesus says: "Have faith in God. If you say to the mountain, 'Go into the sea,' it will happen. If you have faith and not doubt." The fig tree withers because it is not performing its function when needed-- no figs for a hungry traveler. If we spend our days doubting, worrying, fearful, paranoid... we are not living out what we believe.

Of course there are pickpockets at Termini and other major hubs where people gather. People have their cash, phones, bags, etc. stolen every day. But just because there are a few pickpockets doesn't mean everyone there is a pickpocket, right? That's irrational thinking. It's also illogical to assume everyone traveling from a predominantly Muslim country is a threat. It's paranoia to assume every refugee fleeing terror or civil war in Syria or other places is a danger. Maybe there are a few. But not most; and certainly not all.

When I made the connection between my fear and the reality in the train station, I breathed a little easier. I still protected my things and was cautious, but did so in a way that allowed me to enjoy myself in a place I had always dreamed of visiting. What's the first thing Jesus says about the fig tree: "Have faith in God." Our world is no more or less crazy than what we read about in the story. What might we become if we put aside our immediate, often negative responses to scary realities and embrace faith?
Email Post