"Why do bad things happen to good people?" is a timeless question, one that most or all of us has asked before. I know I have. One of my first experiences in ministry was working as a chaplain at Parkland Hospital in Dallas while I was in seminary. Most of the time I was on-call, the only chaplain on the overnight shift in one of the busiest trauma-1 hospitals in the country. My pager would buzz and I wouldn't know where I was needed: the ER? The burn unit? The neo-natal unit? I would call the nurse station, rush to the elevator, then silently pray: "God, the odds are good I will not be able to deal with the situation I am about to enter. At least not without your help." Invariably I found myself in the hospital chapel asking myself, "Why do bad things happen to good people?"

In North Texas this week, there were several opportunities to ask that question. A fifteen year old black student named Jordan Edwards was killed by a police officer in Balch Springs. The officer was subsequently fired and arrested for murder. A standoff in East Dallas ended with a murder/suicide and a paramedic in the hospital. A worker was killed and another seriously injured at an apartment complex just a few minutes from here. Tornadoes ripped through East Texas, killing five people. Congress voted to change the health care system, potentially jeopardizing the well being of millions of Americans, particularly the poorest among us. "Why do bad things happen to good people?"

And today is Blue Sunday at Grace, where we will receive an offering to support victims of child abuse in our area through the Grayson County Child Welfare Board. The statistics are staggering:


These statistics do not have to be the final story. I printed off some activities for families to do together; you'll find them on a table in the hallway. They're printed on bright pink paper; only after copying did I think to put them on blue paper for blue Sunday! There was a disclaimer after those harrowing stats on the Blue Sunday materials: "Do not let these statistics discourage you. Use the information to empower you to pray and seek God in these kids' behalf." And we can also do our best to develop an understanding of suffering that expresses the hope of the gospel of Jesus Christ, rather than trying to blame God or rationalize human suffering. I often say, "The best answer to bad theology is good theology."

For it is to your credit if, being aware of God, you endure pain while suffering unjustly. If you endure when you are beaten for doing wrong, where is the credit in that? But if you endure when you do right and suffer for it, you have God’s approval. For to this you have been called, because Christ also suffered for you, leaving you an example, so that you should follow in his steps.
‘He committed no sin,
and no deceit was found in his mouth.’
When he was abused, he did not return abuse; when he suffered, he did not threaten; but he entrusted himself to the one who judges justly. He himself bore our sins in his body on the cross, so that, free from sins, we might live for righteousness; by his wounds you have been healed. For you were going astray like sheep, but now you have returned to the shepherd and guardian of your souls.

It sounds like the text is legitimizing suffering: "If you endure when you do right and suffer for it, you have God's approval." Does that mean God is causing this suffering? Or is God looking the way when a child is abused or a spouse is beaten or a natural disaster destroys a home? Does the insurance industry still classify those things as acts of God? People who attend the Wednesday Bible study can tell you: I really struggled with this text this week! How can we read such a thing on the same day as we're supporting child abuse prevention?

For help I especially leaned on the wisdom of scholars from historically oppressed communities: a women's commentary and a commentary from the African American experience. I learned that 1 Peter has been used across the centuries to justify the oppression of others. But the text does not endorse human suffering. It does not say God causes suffering. In fact, the text isn't even about suffering. It's about faithful endurance.

First Peter was not written by the apostle Peter; Peter is believed to have been martyred around the year 62 or 64. 1 Peter was written closer to the year 90, and named in honor of the apostle. It was not written in Jerusalem or Rome, but modern day Turkey: it's a letter, or more accurately a sermon, addressed to Christians in "Pontus, Cappadocia, Asia, and Bythnia." It's a word of encouragement to Christians, former pagans, who are suffering for their faith-- not necessarily tortured like the namesake Peter himself, but more likely dismissed or shamed or cast away from friends and family. See, this context helps us understand the passage better: these Christians are hurting because of their faith: "For it is to your credit if, being aware of God, you endure pain while suffering unjustly... But if you endure when you do right and suffer for it, you have God’s approval." The text does not dismiss human suffering. It embraces Christian hope in the midst of suffering.

One of my favorite Christian thinkers, William Sloane Coffin, said this about hope: "Hope has nothing to do with optimism. Its opposite is not pessimism but despair. And if Jesus never allowed his soul to be cornered into despair, clearly we as Christians shouldn't either."

Yesterday our confirmation class participated in an amazing ministry called Bed Start. We traveled to Plano to serve alongside members of my former church, Custer Road UMC, and others to deliver beds and furniture to those in need. Our crew arrived at a home in East McKinney with a trailer full of donated beds, couches, chairs, and bedding. We walked inside the house to see a woman, her mother in law, and two daughters who had just relocated to Texas from Ohio. Fleeing an abusive situation, they came here to be near family carrying only two suitcases. The only furniture in the home was a couch they had pulled out of a dumpster a couple of days before. When we left, they had four beds, a new couch, a recliner, books shelves, dressers... and the love of Jesus Christ. The woman told me she had just been placed with a full time job. Hope has nothing to do with optimism. It's about overcoming despair. 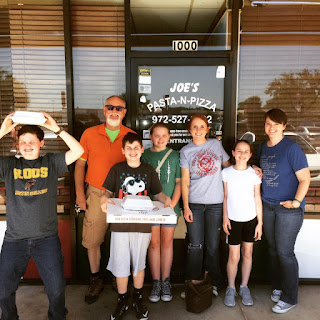 In her classic book Suffering, Dorothee Soelle reminded me this week that the Bible speaks of God as the "lover of life" (Wisdom of Solomon 11:26)-- not the cause of suffering. God loves life. So Jesus, Soelle says,

...drew himself precisely to those who lived on the fringes or were cast out, like women and children, prostitutes and collaborators. He affirmed those who were everywhere rejected and compelled to reject themselves. It is from the background of this affirmation of life, even the life of those who were sick, disabled, or too weak to accomplish much, that one must see the understanding of the acceptance of suffering as it developed in Christianity. It is an attempt to see life as a whole as meaningful and to shape it as happiness. The God who is the lover of life does not desire the suffering of people... but instead their happiness.

First Peter encourages the suffering Christians to find comfort in the example of Christ, who endured the cross, but by accepting it forever changed its meaning. The cross is no longer an instrument of death and shame; it is a symbol of hope and endurance for those who have faith. Through the cross, Jesus, our Good Shepherd, brings us to a place of comfort and peace. "You lead me besides still waters. You restore my soul. Surely goodness and mercy will follow me all of my days, and I will walk in the house of the Lord forever." Jesus said, "I came that you may have life, and have it abundantly."

It's been a very challenging week. There is injustice, the threat of war, the loss of life and resources. But in the midst of that and more is the message of the gospel. May we all find hope and meaning in the sufferings of others and in whatever challenges we face. May we find comfort and strength in God, the lover of life. And may Christ's example of accepting his cross fill us with righteousness, that we may return with confidence to the green pastures of our Good Shepherd. In the name of the Father, the Son, and the Holy Spirit, Amen.
Email Post