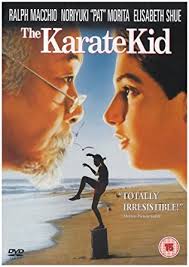 Introduced Linus and Miles to a classic last night! They loved it. I was Miles' age when it was released.. The Karate Kidhttps://t.co/MQeHAOcyUc
— Pastor Frank (@revfrankdrenner) June 15, 2018


I'm not sure how well this movie holds up 35 years later. Much of the first hour is unwatchable. Not until Daniel gets to washing and waxing and painting does anything really interesting happen. But one scene really engaged me last night, and it's one I want to break down with the boyos later today. Daniel pops in on Mr Miyagi one evening. He is dressed in his war uniform. Drinking heavily, singing what he calls "Japanese blues songs" to a picture of a woman. We learn it's his wife-- and this night is the occasion of their anniversary. Another picture shows his wife, pregnant. Mr Miyagi says, "Was going to be the first American born Miyagi." He then mumbles something else before collapsing on his bed, passed out. He's holding a telegram.

Daniel tucks his mentor in to bed, and picks up the notice. "We regret to inform you that your wife and unborn child died at [don't remember] camp due to complications with the pregnancy. 1944. We learn that while Mr Miyagi served his adopted country in the war, Mrs Miyagi was interred at one of the infamous camps for people of Japanese descent during WWII. Justified at the time as a national security issue during a time of war, the internment of these people, many of whom were American citizens, is regarded as a national disgrace seventy years later.

The parallels are striking when we think about the forced separation of families happening at the border today. Many critics of the policy are saying, "This is not us," meaning Americans don't do this kind of thing. The Karate Kid, in the most random way, reminds us that yes, we have. Families were routinely broken during slavery. Native American children were forced to attend Christian missionary schools for years, hundreds or thousands of miles away from their families and culture. This part of our story. It's shameful and it must end.

Yesterday when asked to defend the policy of separating children from parents, administration officials cited Paul's admonition for Christians "to place themselves under the authority of the government" (Romans 13:1). This problematic text has been used time and time again to justify laws that are contrary to God's will-- most notably by slaveholders to justify the evil of slavery. The text isn't meant to give the government blanket protection against unjust policies; it's meant to give Christians cover, so that they can continue to practice their faith in the face of oppressive government. How does that particular section of Romans 13 end?

"Love is the fulfilling of the law." How does the forced separation of families embody love?

We can do better. We can have compassion for children separated from their parents. We can treat those of other ethnicities/religions/origins as equals. We must do better.

At the end of The Karate Kid, Daniel beats the bullies, wins the girl, earns the trophy. Mrs Miyagi's ordeal and Mr Miyagi's grief is mentioned in that one random scene, and never again. The broken family is forgotten, at least for the first installment. I can't remember The Karate Kid II, except that it takes place in Okinawa. I never saw The Karate Kid III, or the three attempted reboots of the franchise. No kidding:
1984
1986
1989
1994
2010
And now this:

I hope we will not forget the plight of families at the border as the film forgets Mrs and Mr Miyagi's painful situation. We can't just move on from unjust policies. Love must win. Not just in the movies.
Email Post