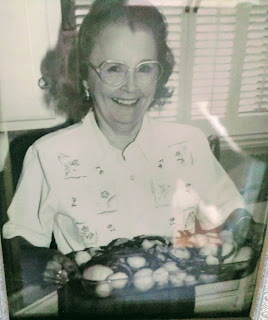 First, let me say that the words I will speak today are the words of a grandson about his grandmother. A grandchild will almost always have a different experience of a grandparent than the children remember of their parent from their childhood! I'm here to speak about my Mema, the woman you may have called Mom, Adele, or Dear Heart and Gentle Person.

I'm so glad the picture the family chose for the obituary/bulletin is this one. I had already planned on talking about it, before I knew you would have it in your hand. It reveals so much of her character. This was probably an Easter Sunday or Mother's Day. The family was gathered at my parents' former home on Avenue H, just down the road from here. She's holding a tray of potatoes and green beans, fresh from her garden. I remember Mema and Papaw's garden-- they would work outside in the hot sun for hours, while I’m watching from the cool, air conditioned kitchen, eating a snack. Like I said, grandkids have a unique perspective!

Anyway, Mema is clearly proud of her veggies, obviously excited to share them with her beloved family, eager to embody hospitality at yet another family meal. Although this wasn't her kitchen in the picture, I will always associate her with that space in her home. I don't know how many sermons on hospitality I have preached over the years that featured some discussion of this picture or Mema's kitchen.

My cousin Ron and I would often spend the night on Fridays, playing cards with our grandparents until 3:00 a.m.-- sounds like typical fun teenage Friday nights right-- then wake up to the smell of pancakes coming from Mema's kitchen. Or she would pop garlic popcorn on her stove and we'd watch a double header of baseball on ESPN. I'd usually fall asleep on the floor in front of the TV about halfway through the second game. The small table in the kitchen hosted what must have been billions of inter-generational games of Spades between Mema and Papaw and everyone in the family. When I was a kid her entire house would transform into a card playing tournament on Thanksgiving after the meal, which, of course, was cooked in her kitchen.

Playing cards, Mema had a familiar, and frustrating strategy. "I don't remember what's been played,"she would say, before dropping the hammer on her opponents. We would roll our eyes whenever she said that. She also had a unique way of remembering people who had moved away or died. She would ask, "Where did they live?" I used to tease her about that all the time. She would ask Papaw or Aunt Pam about someone and before they could answer I would say, "Didn't they live on...?" Of course having no idea who the person was or where they lived. She didn't laugh about that much after the first few times. She didn't want to look in the phonebook for an address-- she had a way of identifying people with their neighborhood. Her way of remembering addresses or people would be nearly impossible today, with our society's constant movement or the technology we need to keep track of each other. Her system was more powerful and showed a better understanding of community than the Yellow Pages or Google Maps.

Mema was born in 1927, just a couple of years before the Great Depression. She and her siblings were raised in El Campo by her beloved parents. She loved telling stories of picking cotton when she was a little girl. She loved baseball, but not just as a fan; her favorite position was catcher. The Depression was one of the defining moments of her life. She grew up in a world that is today hardly imaginable. I asked Mema and Papaw once what the biggest change they ever experienced was. For me, I'd probably say the Internet. You know what they said? Air conditioning. Air conditioning! But her simple, meager lifestyle made a tremendous impact on her. She would walk from one room to the next and always turn off the lights, not wanting to spend unnecessary money. It's one habit I picked up from her. I don't know how many bonus steps I take each day turning off lights left on in my house! The lessons learned during her early days forged her strong work ethic, which she would embody at home with her kids or at the store she and Papaw ran together in Wadsworth.

The other defining aspect of Mema's life was her family. Her pride was her children and grandchildren and great grandchildren. She and Papaw married on Easter Sunday, April 21, 1946. They were married for almost 73 years. 73 years! Easter happens on April 21st again this year. The only other time Easter Sunday fell on their anniversary during their marriage was 1956. Christy and I were also married on Easter Sunday, March 30, 1997. Easter doesn't fall on our anniversary until 2059. Even then we'll need another decade to catch Mema and Papaw. You didn't know you would receive some bonus calendar trivia today.

That same kind of smile she's flashing in the picture she'd share when hearing about our victories or silly missteps. She would laugh and laugh, but it was always tenderhearted.

Mema was a woman of great faith. She would say the Lord's Prayer and the words of Psalm 23 from memory in her private devotional time. Let's read them together; they are printed in your bulletin.

The Lord is my shepherd, I shall not want.
He makes me lie down in green pastures;
he leads me beside still waters;
he restores my soul.
He leads me in right paths
for his name’s sake.

Even though I walk through the darkest valley,
I fear no evil;
for you are with me;
your rod and your staff—
they comfort me.

You prepare a table before me
in the presence of my enemies;
you anoint my head with oil;
my cup overflows.
Surely goodness and mercy shall follow me
all the days of my life,
and I shall dwell in the house of the Lord
my whole life long.

Mema's life-long faith guided her through the dark valleys of the Great Depression, World War II, the deaths of her parents and brothers, and dementia. Her Good Shepherd filled her cup with goodness and mercy all of her days. And now at the end of her earthly life she enjoys the blessed rest besides the still waters and in the greenest valleys. Her soul has been restored.

It's funny how she always said, "I can't remember" when playing cards, when her memory was taken by dementia in her later years. She recited the Lord's Prayer or Psalm 23 from memory throughout her life, but couldn't remember faces or names of many of us. She could remember people based on where they lived in town, but she couldn't recognize me. But I could make her laugh. I would introduce myself as The Preacher Man or Her #1 Grandson (which is true by birth order). And she would crack. up. I would call her Miss Adele from
El Campo and she would lose. it. She lost memory but didn't lose joy. Her smile, her laugh, her most defining characteristics. She had them until the very end.

The other day I told the woman who cleans our house that my grandmother, aged 92, had died. I didn't say anything else about Mema. She said her mother in law was 96 and had Alzheimer's. She cannot remember anyone. She cries all day, wanting to die because she is so sad and alone. What a miracle that Mema had the exact opposite experience.

On the night Jesus was arrested, the day before going to the Cross, he walked with his disciples on the way to a prayer garden. He said to them, "You have sorrow now. But I will see you again, and I will turn your sorrow into joy. And no one will take your joy from you" (John 16:22). He anticipates their grief because of his death before it even happens. Mema's last years could have been spent in sorrow, but instead it was joy. Laughter. Singing. Dancing. Hugs. Even the other night after her stroke she couldn't speak or move her right side. But her left arm was patting us, hugging us, holding us close. I'll never forget that.

I have this theory about how God heals our grief. Over time, our grief changes into gratitude for the person who has made such an impact on us. But for me, I'm already experiencing gratitude. 92 years old? Grateful. Having my grandmother for 48 years? Grateful. A family of love and support and encouragement grounded in the faithful lives of Mema and Papaw? Grateful. I'm already there. I hope you are too. God has turned our sorrow into joy. Joy we knew embodied in Miss Adele from El Campo. And no one will take that joy from us.

Above all, clothe yourselves with love, which binds everything together in perfect harmony. And let the peace of Christ rule in your hearts, to which indeed you were called in the one body. And be thankful.