Am I My Brother's Keeper? 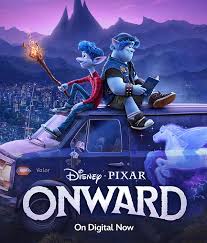 Last Year the North Texas Conference shared a new initiative to help churches explore new possibilities and settings for ministry: New Faces for New Spaces. Grace launched a monthly worship experience called Mesa, which was very informal, hosted around tables, focusing on a meal and spiritual connections. We wanted to reach college-aged young adults, but after several months we decided to shelve the effort. Existing Grace UMC folks were moving from Sunday to Saturday, and we were not reaching our target audience.

Then I had an idea for a new ministry: we could rent out an auditorium at a local cinema, watch a first-run movie together, then spend some time exploring the spiritual issues of the film. I wanted to watch Pixar's newest movie Onward for the first screening. Then Covid 19 hit, cinemas across the country closed, and Disney last weekend opened up Onward for streaming. You can rent it for $20 (less than what I paid to take my family of five to the cinema), or if you have a Disney+ subscription, you can watch it there now.

But is it worth it? Here's my review; when I get to spoilers I'll let you know.

Onward is a sweet movie. Being a Disney movie, of course it centers around a kid dealing with a parent's death (this is in the trailer, so I am not spoiling anything). The movie takes place in a fantasy world, sort of like The Hobbit; but much of the magic has worn out and it's just another version of what we know. Ian and Barley, brothers, embark on a journey to spend a few final hours with their departed father. It's a road trip movie involving achievements, spells and discoveries. Along the way the brothers struggle with all the usual issues between brothers. There are some really fun scenes, like one featuring a spell where one brother has to tell the truth; every lie reveals more of a hidden secret.

There are several Indiana Jones references.

In the Bible, sibling rivalry is a common theme: Cain murders his brother Abel, Jacob and Esau, twins, fight in their mother's womb. Jacob comes out after his brother, literally grabbing Esau's heel. Jacob steals Esau's birthright and his father's blessing, leaves home to save his life, only to return years later in one of the Bible's more emotional reunions. Joseph lorded his father's love over his others brothers; their jealousy led them to sell him to slavers and cover it up by staging Joseph's death. And all of those stories are only in Genesis!

You know going in to a Pixar movie there will be a huge emotional impact. They will make you cry. At the end of the movie, everyone in my family was in tears; not because of the hoped-for reunion with Dad; the relationship between the brothers is fully revealed. Their bond is powerful and moving. You're made to appreciate those healthy family connections when they are there.

Is the movie good? Worth investing $$ and time? Absolutely. Is it an instant classic? No. But not every ballplayer hits a home run on every trip to home plate. Sometimes a walk or single can be just as helpful to the team. Here's a link to my all-time Top 10 Pixar films; Onward didn't make the list, but it's still good!: https://www.pastorfrankdrenner.com/2018/06/top-10-pixar-movies.html