The Psalmist, Ahmaud Arbury, and our Mothers

In you, O Lord, I seek refuge;
do not let me ever be put to shame;
in your righteousness deliver me.
Incline your ear to me;
rescue me speedily.
Be a rock of refuge for me,
a strong fortress to save me.

You are indeed my rock and my fortress;
for your name’s sake lead me and guide me,
take me out of the net that is hidden for me,
for you are my refuge.
Into your hand I commit my spirit;
you have redeemed me, O Lord, faithful God.

My times are in your hand;
deliver me from the hand of my enemies and persecutors.
Let your face shine upon your servant;
save me in your steadfast love.

What does it mean for God to be one’s rock, fortress, and refuge?

Before we get to that, let me start this morning with Mother’s Day greetings to my mom, who is probably watching this service LIVE from Bay City, TX. When I was a sophomore in high school, I was in Mrs Fountain’s English class. She was an amazing teacher, one of my favorites. But she could be intimidating. Anyway, we were studying poetry, and I was clueless about poems; a condition I still suffer from! I had to make a project and present it to the class. I had no idea what to do. Mom had a book of Shakespeare’s sonnets, and she and I found one I could understand. I made a poster, clipped out pictures from magazines, and walked the class through the sonnet. It was funny, and if memory serves I received an A, not an easy thing in Mrs Fountain’s class. Thanks for the help when I was 15, and every day before then and since. Happy Mother’s Day. I love you.

Speaking of poetry, today’s psalm is a plea for help in times of trouble. It speaks to a spiritual need in the present: protection, confidence, faith in the face of challenges. “Never let me be put to shame. Rescue me by your righteousness! Deliver me quickly! Get me out of this net that’s been set for me!” The psalmist also entrusts his future to God’s care: “My future is in your hands!” This is “life in the meanwhile,” as our Psalms Bible study described the now and not yet of a life in faith. God promises a future of freedom and joy, even as we are beset by challenges in the present. Since the psalms are poems, prayers, and hymns, meant to be shared together in community, they speak to a collective need as well. The psalmist’s needs are our own: deliverance, salvation, for God to be a rock and strong fortress when we require protection and safety.

1 Peter 2:4-5 says, “Come to him, a living stone, though rejected by mortals yet chosen and precious in God's sight, and like living stones, let yourselves be built into a spiritual house, to be a holy priesthood, to offer spiritual sacrifices acceptable to God through Jesus Christ.” 1 Peter was written for persecuted Christians who feared for their lives because of their faith. They may have felt isolated during their time of crisis; the writer wants them to feel comfort in their togetherness. Let yourselves be built into something bigger and stronger than you are on your own. Submission, vulnerability, obedience are part of the equation. “Life in the meanwhile:” between current persecution and future deliverance.

In John Chapter 14, Jesus says, "Do not let your hearts be troubled. Believe in God, believe also in me. In my Father's house there are many dwelling places. If it were not so, would I have told you that I go to prepare a place for you? And if I go and prepare a place for you, I will come again and will take you to myself, so that where I am, there you may be also. And you know the way to the place where I am going. I am the way, and the truth, and the life. Not one of you comes to the Father except through me.”“Life in the meanwhile:” Jesus, aware of the disciples’ grief, speaks to their pain and gives them confidence to look beyond their current circumstance to the assurance of reunion with him after his resurrection.

“Life in the meanwhile” binds all believers into one living structure; a fortress, a building, a house. All people are made one family in one dwelling place. We are neighbors to each other. We are responsible for each other. When one achieves a victory, we all win; when one suffers, we all grieve. Anyone who has ever lived with another person, however, knows that when people are together everyone has their own stuff. If we do not have a clear understanding of what it means to live in community we will experience conflict and pain.

After I learned this week of the murder of Ahmaud Arbury, an unarmed African American man at the hands of armed white men, familiar questions from scripture popped into my head: “Who is my neighbor?”;  “Am I my brother’s keeper?” I was compelled to grab Jesus and the Disinherited by the great Dr Howard Thurman. 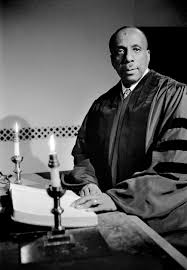 Once the neighbor is defined, then one’s moral obligation is clear. In a memorable story Jesus defined the neighbor by telling of the Good Samaritan. With sure artistry and great power he depicted what happens when a man responds directly across the barriers of class, race, and condition. Every man is potentially every other man’s neighbor. Neighborliness is nonspatial; it is qualitative. A man must love his neighbor directly, clearly, permitting no barriers between.

Obviously the armed white men did not regard Arbury as a neighbor; but what about the broader community and our society? Most of us learned of his murder this week, but it happened in February! How, or why, could it have taken ten weeks for an arrest to happen, when the killers were hiding in plain sight and the police and other authorities knew the circumstances of the case? Did no one in the justice system consider Ahmaud to be a neighbor? The murder is rightly being considered a lynching; except the perpetrators didn’t wear Klan sheets and the weapon was not a noose.

What barriers exist that keep people from being neighbors in Georgia in 2020? What barriers exist in Sherman or Britain or wherever you are today? By our silence and inaction are we permitting them to exist? The worst thing about racism and hate is that they destroy both the target and the one inflicting the harm. Community is destroyed. The potential for a peaceful and just society is destroyed. Our violence and rage prevent us from being built into a spiritual house. For God to be a rock of refuge and a strong fortress it requires each of us to be neighbor to the other; the vision is one house with many rooms, not a house for everyone who looks/acts/believes/worships/votes the same as you.

Every now and then over the past two months someone asks me how I am doing, and I auto-respond with “Fine,” as I normally would. But the truth is today I am not fine. I’m angry. This young man would have had his 26th birthday a couple of days ago. What is his mother feeling on this Mother’s Day? My heart breaks for that family, and I am also just about done with everything going on right now. The virus has laid bare every injustice going on in America, exposing the hate, greed, indifference to human life that so many people live with. Two people were shot at a McDonald’s in Oklahoma City because a family was not allowed to eat inside the building. A security guard in Michigan was murdered because he required a woman to wear a mask before entering the store. What are those mothers feeling on this Mother’s Day?

“Life in the meanwhile” God wants to build us into a spiritual house, a community that lives and breathes justice for all, but we have to be willing to become that people. “Let yourselves be built…” We have to surrender to God's will in order to become a royal priesthood. “Once we were no people, but now we are God’s people.” We have far to go.

Since it’s Mother’s Day, I’ll close with a sweet story from the book. Halley’s comet was making its way to visit earth. Young Howard’s friends had been talking about it, but he had not yet seen it, because he wasn’t allowed outside after dark. One night his mother woke him up and took him into the backyard.

I shall never forget it if I live forever. My mother stood with me, her hand resting on my shoulder, while I, in utter, speechless awe, beheld the great spectacle with its fan of light spreading across the heavens. The silence was like that of absolute motion. Finally, after what seemed to me an interminable time interval, I found my speech. With bated breath I said, “What will happen to us if that comet falls out of the sky?” My mother’s silence was so long that I looked away from the comet to her face, and there I beheld something in her countenance that I had seen only once before, when I came into her room and found her in prayer. When she spoke, she said, ‘Nothing will happen to us Howard; God will take care of us.’

Are you feeling like a comet is crashing down on our society?

Jesus knew the words of Psalm 31; he quoted it from the Cross: “Into your hands I commit my spirit” (Psalm 31:5). Today, we live in the meanwhile between hate and peace, brokenness and healing, fear and redemption.

Halley’s comet flew over the Thurman home in 1910; it flew over my house in 1986, but I don’t remember if I saw it, maybe because that was the night Mom was helping me with my English project for Mrs Fountain’s class. It will return in 2062, when I’ll be 91 years old. Maybe by then we’ll have made the decision to allow ourselves to be built into a spiritual house. Until then, the best we can do is the loving work to commit ourselves to seeing each other as neighbors. And to have the confidence of Mrs Thurman, that nothing will happen to us; God will take care of us. We join in with the cries for justice for all mothers everywhere who mourn, praying to the one who is our Rock, our Strong Fortress, our Way the Truth and the Life: “Into your hands we commit our spirit.”