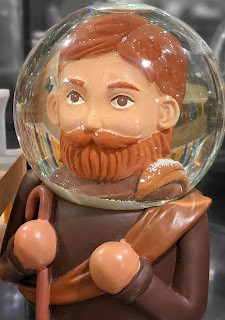 Yesterday was a lousy day. Our service cut out during the sermon, and when I came home I fought with an overflowing toilet for a while (not in a gross way thankfully, but still..) I was under a black cloud of perfectionistic self critique most of the day; you can imagine how that went for Christy and the boys!

This is a shepherd, not Obi Wan Kenobi (he's holding a shepherd's crook). The shepherds were the first to visit the Christ child, returning to their flocks with joy. That's who this guy is- an ordinary shepherd with a hobby of space or deep sea exploration. Many of the great biblical characters were shepherds, and it's a metaphor for God (Ezekiel 34 and Psalm 23).

Jesus was familiar with these traditions, as well as the relationship between sheep and shepherd: "...He goes ahead of them, and the sheep follow him because they know his voice. They will not follow a stranger, but they will run from him because they do not know the voice of strangers... I am the good shepherd. I know my own and my own know me, just as the Father knows me and I know the Father. And I lay down my life for the sheep. I have other sheep that do not belong to this fold. I must bring them also, and they will listen to my voice. So there will be one flock, one shepherd" (John 10:4-5,14-16).

There is a relationship, an intimacy, between sheep and shepherd.The shepherd knows each sheep's name, and the sheep know and follow the shepherd's voice. The shepherd knows the fears, doubts, hopes, and failings of each sheep. This guy isn't the Good Shepherd, because Jesus wasn't a white dude with a red beard- but the heart of God is revealed in the intimacy between sheep and shepherd.

So the Good Shepherd can whisper in my ear something like this: "Frank, don't beat yourself up over today. My love for you and the congregation is bigger than a technical glitch. You'll have another chance in six days! Go for it!"

The Good Shepherd's love is bigger and wider and safer than our shortcomings. Rest in knowing that your name and everything about you is known by the One who seeks you when you are lost, leads you back to the safety of the fold, and guides you into newer, greener pastures. 🐑♥️