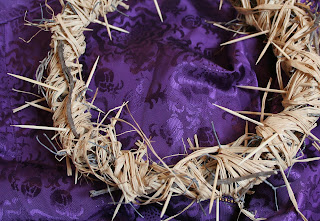 When they were approaching Jerusalem, at Bethphage and Bethany, near the Mount of Olives, he sent two of his disciples and said to them, ‘Go into the village ahead of you, and immediately as you enter it, you will find tied there a colt that has never been ridden; untie it and bring it. If anyone says to you, “Why are you doing this?” just say this, “The Lord needs it and will send it back here immediately.” ’ They went away and found a colt tied near a door, outside in the street. As they were untying it, some of the bystanders said to them, ‘What are you doing, untying the colt?’ They told them what Jesus had said; and they allowed them to take it. Then they brought the colt to Jesus and threw their cloaks on it; and he sat on it. Many people spread their cloaks on the road, and others spread leafy branches that they had cut in the fields. Then those who went ahead and those who followed were shouting,

Blessed is the one who comes in the name of the Lord!

Blessed is the coming kingdom of our ancestor David!

Hosanna in the highest heaven!’

Then he entered Jerusalem and went into the temple; and when he had looked around at everything, as it was already late, he went out to Bethany with the twelve.

The Sunday before Easter is filled with powerful imagery, but it begins with an unusual request: the disciples are instructed to find a colt and bring it back to Jesus. If anyone asks, even the owner of the colt, they are to say, “The Lord needs it,” and… everything will be fine? But they get away with it! Riding on the “borrowed” colt, Jesus enters the holy city. It is a wild scene-- crowds surrounding Jesus on all sides, ecstatic disciples leading the procession, strangers throwing their cloaks on the ground while waving palm branches cut from nearby trees. The people shout Hosanna!, meaning, “Lord save us!”

The parade route takes Jesus to the glorious Temple, the center of ancient Israel’s worship. Abruptly Jesus leaves the donkey, goes inside, looks around and… leaves town?? I had never noticed this detail before. All the hype and celebration and pageantry just ends. What did Jesus see in the Temple? Was it no big deal- like people were doing what they normally would do, so since it was near the end of the day he just decided to find some place to crash? Or was what he saw there so frustrating that he decided he needed a night to prepare spiritually for the challenges of the coming days?

Our second scripture of the day illuminates the heart and mind of Christ, before the beginning of time, and continuing right through the events of Good Friday and Easter:

Let the same mind be in you that was in Christ Jesus,

who, though he was in the form of God,

did not regard equality with God

as something to be exploited,

taking the form of a slave,

being born in human likeness.

And being found in human form,

and became obedient to the point of death—

even death on a cross.

and gave him the name

that is above every name,

so that at the name of Jesus

every knee should bend,

in heaven and on earth and under the earth,

and every tongue should confess

that Jesus Christ is Lord,

to the glory of God the Father.

The Sunday before Easter is commonly referred to as “Palm Sunday,” but it is more aptly known as Palm/Passion Sunday.  We do not end our scripture lessons or musical pieces with the joy of the parade, but the service spans the whole of Holy Week- from jubilation to sorrow, from crowds to isolation. It’s a Sunday full of paradoxes: joy/rage, peace/vengeance, innocence/guilt. The mind of Christ/the mind of the crowds.

What is the mind of Christ? The Lord of all, our Teacher, Friend, Redeemer, Savior humbled himself, and became obedient- even to the point of a humiliating death in public. The crowds of Jerusalem? Fickle, easily persuaded, quick to abandon their joy at the revelation of God’s promises. One day they shout Hosanna- Lord save us, but by Friday they call for Pilate to release a known terrorist and execute an innocent man. Peter dances alongside his Lord on the donkey, but only a few nights later denies ever knowing him. Are we that fickle as well?

What about our society- especially in light of the mass shootings we have recently witnessed? Does our need to protect what we think is rightfully ours so harden us to human suffering that we are comfortable with children in cages at our borders? Are we so indifferent to violence that we excuse inaction from our leaders when our schools, grocery stores, and public places are constantly unsafe? Does our apathy result in Christ being crucified year after year, again and again? The disciples are tasked with retrieving someone else’s donkey from Jesus’ triumphant entry into the city. If that happened in our world today, the owner would have pulled out a weapon and defended his property, claiming the right to “stand his ground.” Have we learned nothing about rejecting violence? Instead of calling out our need to be saved, have we found salvation in our stockpiles of weapons?

Let’s go back to the Temple. The parade is over. Jesus has gone inside to look around. He doesn’t stay; he leaves the city for the night. If Jesus walked through our congregation today, what would he see? Would he be pleased or upset? If Jesus stopped by to peer into your heart or mine today- what would he see there? Would he want to stay or go?

This is a week full of paradoxes. Celebration quickly turns into mourning. Shouting quickly becomes wailing. Masses of people in the city for a religious festival quickly becomes one Messiah dying a painful death alone. Cries for salvation become cries for individual liberty. Blessed are the peacemakers becomes blessed are the heavily armed. The Lord of all life becomes a victim of state-sponsored execution.

Walking to the cross, allowing Simon to carry the instrument that would kill him, Jesus turns to the crowd: “A great number of the people followed him, and among them were women who were beating their breasts and wailing for him. But Jesus turned to them and said, ‘Daughters of Jerusalem, do not weep for me, but weep for yourselves and for your children. For the days are surely coming when they will say, [Blessed are the barren, and the wombs that never bore, and the breasts that never nursed.] Then they will begin to say to the mountains, [Fall on us]; and to the hills, [Cover us.] For if they do this when the wood is green, what will happen when it is dry?’” (Luke 23:27-31).

Senseless violence, lack of courageous leadership to address it, indifference to the suffering of others. We feel as though the mountains have fallen on us, and the hills have covered us. We are far from having the mind of Christ. But that doesn’t mean it's impossible. Let's look at the words of Psalm 31, verses 9-16, also assigned for Palm/Passion Sunday.

Be gracious to me, O Lord, for I am in distress;

my eye wastes away from grief,

my soul and body also.

For my life is spent with sorrow,

and my years with sighing;

my strength fails because of my misery,

and my bones waste away.

I am the scorn of all my adversaries,

a horror to my neighbours,

an object of dread to my acquaintances;

those who see me in the street flee from me.

I have passed out of mind like one who is dead;

For I hear the whispering of many—

as they scheme together against me,

as they plot to take my life.

But I trust in you, O Lord;

My times are in your hand;

deliver me from the hand of my enemies and persecutors.

Let your face shine upon your servant;

save me in your steadfast love.

The psalmist finds rest in God’s faithfulness: “But I trust in you, O Lord;

I say, ‘You are my God.’” Jesus is affirmed by God’s faithfulness, as he is highly exalted and given the name above all names. Jesus affirms God’s faithfulness by not regarding equality as something to be exploited, but taking the form of a servant and even accepting death on a cross.

Jesus steps by the church building or the individual’s heart and looks around. Even in the midst of violence, turmoil, and uncertainty, may Christ find in each of us a confidence in the faithfulness of God. Ride on, King Jesus! Lord save us!