They had mostly gotten used to having him around. I mean, sure one of his disciples betrayed him, he was arrested while praying in his secret garden, found guilty in a sham trial, died a brutal death no one could ever deserve, and then a few days later reappeared to them, saying of all things: “Peace be with you!”

But after forty days of reappearances, new teachings, and other activities they probably felt like this would go on forever. Instead:

“So when they had come together, they asked him, ‘Lord, is this the time when you will restore the kingdom to Israel?’ He replied, ‘It is not for you to know the times or periods that the Father has set by his own authority. But you will receive power when the Holy Spirit has come upon you; and you will be my witnesses in Jerusalem, in all Judea and Samaria, and to the ends of the earth.’ When he had said this, as they were watching, he was lifted up, and a cloud took him out of their sight. While he was going and they were gazing up towards heaven, suddenly two men in white robes stood by them. They said, ‘Men of Galilee, why do you stand looking up towards heaven? This Jesus, who has been taken up from you into heaven, will come in the same way as you saw him go into heaven.’” - Acts 1:6-11

Ascension Day was this past Thursday, the fortieth day following Easter Sunday. On that day, or in our case on the Sunday following that Thursday, Christians commemorate Jesus’ return to the right hand of God the Father, reclaiming his rightful place in glory. And yet even though Jesus is no longer present on earth, it doesn’t mean he is on holiday; as the Book of Ephesians says,

“God put this power to work in Christ when he raised him from the dead and seated him at his right hand in the heavenly places, far above all rule and authority and power and dominion, and above every name that is named, not only in this age but also in the age to come. And he has put all things under his feet and has made him the head over all things for the church, which is his body, the fullness of him who fills all in all” (1:20-23).

The disciples had no clue about the supremacy of Christ as they stood, frozen, watching him ascend into the heavens. I love the two angels showing up and saying, “Why are you wasting time staring at the sky? Get to work!” But get to work doing what? What are they going to do-- and how are they going to do it-- not that Jesus is no longer around? The Ascension is about the glorification of Christ, but I can’t help feeling sorry for the disciples, who now have to figure all this out.

Figuring all this out is kind of where every church in the world is right now. The Season of Easter ends today; we are in between the Ascension and the gift of the Holy Spirit on Pentecost, which is next Sunday. Pentecost is the birthday of the church, but after slowly coming out of a pandemic, it feels more like a rebirth than a birthday. What are we to do now? And how are we to do it? We don’t want strangers in white clothing showing up, chastising us for our lack of movement.

Speaking of movement, I came across an article this week, and sent it on to our church leadership. The article asked the question: is your church an organization or a movement? An organization has experts and relies on that expertise to move forward. Organizations worry about budget restraints and endlessly discuss and debate ways of responding to current challenges. Organizations often give too much oxygen to a handful of very loud complainers who fear for the organization’s future. A movement, however, is different. Movements are characterized by a rapid succession of events or activities aimed in a new direction. Movements are not restricted by the status quo, what is safe and familiar (and often stagnant).

Movement or organization: it’s a fun exercise in any era, but in post-Covid? The church has to be a movement. Grace UMC cannot cling to the past or long for a return to the way things have always been. The author of the article, excerpted from her book Open Road, was Sue Nilson Kibbey, who said, “The distinguishing hallmark of the movement of Christ followers called the Church is to be an expectant focus up and out in pursuit of uncharted spiritual adventures to embrace and transform the world.” I quickly ordered copies for our church leadership and staff to study and discuss. You’ll hear more later this summer. A sneak preview? Get ready for congregation-wide break through prayer about where God is leading Grace UMC as it approaches its 50th anniversary next year!

Let’s look back at our scripture for today. I was struck by the repetition of a certain phrase; as I read the last two verses again see if it clicks for you:

Just before he is arrested in the secret prayer garden. Hours before his crucifixion. Days before his resurrection. Weeks before his Ascension. Jesus conquers the world before his suffering, not at his glorification. He says it just minutes after he gives the commandment that is most important of all: “What I command you is to love one another.” Before we got to the three references to conquering the world in today’s text we heard this: 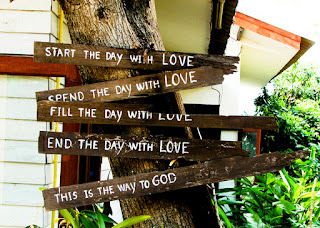 Love is the way to God. Love is the commandment of Jesus. Conquering the world is not accomplished through war or violence or economic disparity; the world is conquered by the love of Christ-- the result of our faith, belief, and love. Sometimes the church is a movement; sometimes it is an organization. It is always defined by and rooted in love. Christ has ascended; we his followers have been commissioned and sent out to serve. Let us not be caught daydreaming, but be found loving each other and the world as Christ first loved us. In this is love: not that we loved God, but that God first loved us. In the name of the Father, the Son, and the Holy Spirit, Amen.