Neil deGrasse Tyson and the Question of Certainty 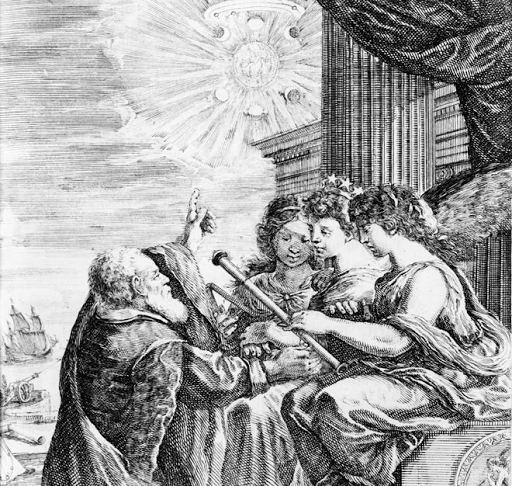 Galileo'e entourage doesn't seem impressed.
Last night as I washed dishes, I half-listened as Miles (16) watched episodes of Neil deGrasse Tyson's Cosmos for his upcoming physics class (yes, homework in July 😾). Topics varied from the spectrum of colors in light to the speed of sound waves. As Dr Tyson shared the stories of the discoveries and those who made them, I wondered: how much of this new knowledge was controversial? In an era when there was no separation of church and state, how many of these scientists suffered because their discoveries were considered anti-religious-- even if the scientists themselves were people of great faith?
And what are the modern equivalents, and implications, today?
The story of Galileo may be the most well known example of a scientist punished by the Church for teachings contrary to official doctrine. Echoing the discovery of Copernicus, Galileo observed that the sun was the center of the solar system, not the earth, and that the planets rotated around the sun. Copernicus championed this idea many years earlier, but fortunately for him () he died only a couple of months after his book was published, so he was safe from the Church's wrath. Galileo, however, was punished to house arrest for the remainder of his life. A life-long faithful Christian, he was denied a Christian burial; rather he was buried in an unmarked grave in the church cemetery. A century later, his body was exhumed and he was entombed in the church's mausoleum. Pope John Paul II formally apologized for this in 1992, some 350 years later. How many souls were saved because the Church, for centuries, when asked about heliocentrism (sun at the center of the solar system) responded with: "lalalalalala" (ears plugged, of course).
🙈 🙉 🙊
I found this article which lists a few scientists who were challenged by the Church or other authorities; there is a link in the article to the original piece, which has much more information: https://www.wired.com/2012/06/famous-persecuted-scientists/
My purpose here is not to debate the relationship between faith and science; I've said before that from my perspective they are both about the pursuit of ultimate truth, so they are more closely related than we often consider. One does not exist to prove or disprove the other. Nor am I really interested in whether scientists as a whole are any more atheistic than anyone else. But how would we feel if our heroes, who pursued their work with honesty and diligence, were condemned by an institution that was unwilling to listen? Has the Church's occasional insistence of right belief pushed away people who were genuinely curious-- and are we worse off because of our stubbornness?
The religious leaders of Jesus' day were parodied in the gospels. There is no way faithful scribes, Pharisees, and other respected teachers of Judaism were that blind/stubborn to the new thing God was doing in their midst. At a minimum, they would be curious, like our intrepid scientists. The gospel writers used a little creative freedom to hype up the conflict. Here's an example from Luke 6:9-11:

"Then Jesus said to them, ‘I ask you, is it lawful to do good or to do harm on the sabbath, to save life or to destroy it?’ After looking around at all of them, he said to him, ‘Stretch out your hand.’ He did so, and his hand was restored. But they were filled with fury and discussed with one another what they might do to Jesus."

Filled with fury? At a miraculous healing in a worship service?? Wouldn't they at a minimum be pleased that at least people were awake enough to see when God showed up for once?
Our need for certainty, to win the argument, to shame the opponent, to shout over those who disagree, was not born of social media or our contemporary poisonous rhetoric. It's part of the human condition. We need to get over it. It's damaging enough to ourselves to constantly insist on our way or the highway; but think of those beyond our own spaces-- how are they being pushed away from a healthy relationship with God because we would rather argue about the placement of the sun and planets? Or the appropriate time of the week to meet someone's physical or spiritual needs?
The Pharisees and religious leaders played the roles given to them by the gospel writers-- like a play at the Pocket Sandwich Theatre in Dallas, we boo, hiss, and throw popcorn at them when they enter the stage. Jesus didn't play along; his responses, even the defiant "stretch out your hand," were invitations. His opponents too were welcome to become his disciples. At least one accepted the invitation-- Nicodemus (John 19:39)-- and there were likely others. Heck, the Apostle Paul considered followers of Jesus to be Public Enemy #1 until he himself was changed. It took a long time for others to believe his newfound faith wasn't some kind of trick. Sermons of encouragement like this surely helped:

As God’s chosen ones, holy and beloved, clothe yourselves with compassion, kindness, humility, meekness, and patience. Bear with one another and, if anyone has a complaint against another, forgive each other; just as the Lord has forgiven you, so you also must forgive. Above all, clothe yourselves with love, which binds everything together in perfect harmony. And let the peace of Christ rule in your hearts, to which indeed you were called in the one body. And be thankful. Let the word of Christ dwell in you richly; teach and admonish one another in all wisdom; and with gratitude in your hearts sing psalms, hymns, and spiritual songs to God. And whatever you do, in word or deed, do everything in the name of the Lord Jesus, giving thanks to God the Father through him (Colossians 3:12).

Evidently Galileo remained a faithful believer despite the Church's punishments and its inability to learn from him. The message for us: stay curious. Be certain only that God does indeed still show up in people's lives, revealing new truths that will challenge us. Time to stretch out our hands/hearts/minds, so that others are not excluded from God's grace, but find themselves a home there as well.