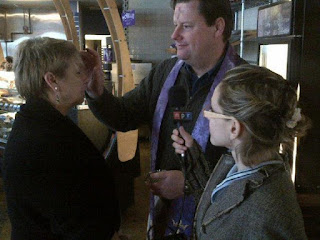 Announcement of alarm and peril

2 Blow the horn in Zion;

give a shout on my holy mountain!

Let all the people of the land tremble,

for the day of the Lord is coming.

a day of clouds and thick darkness!

a great and powerful army comes,

unlike any that has ever come before them,

or will come after them in centuries ahead.

and ready to forgive.

14 Who knows whether he will have a change of heart

and leave a blessing behind him,

a grain offering and a drink offering

for the Lord your God?

Let the groom leave his room

and the bride her chamber.

17 Between the porch and the altar

Let them say, “Have mercy, Lord, on your people,

and don’t make your inheritance a disgrace,

an example of failure among the nations.

Why should they say among the peoples,

20 So we are ambassadors who represent Christ. God is negotiating with you through us. We beg you as Christ’s representatives, “Be reconciled to God!” 21 God caused the one who didn’t know sin to be sin for our sake so that through him we could become the righteousness of God. 6 1 Since we work together with him, we are also begging you not to receive the grace of God in vain. 2 He says, I listened to you at the right time, and I helped you on the day of salvation. Look, now is the right time! Look, now is the day of salvation!

3 We don’t give anyone any reason to be offended about anything so that our ministry won’t be criticized. 4 Instead, we commend ourselves as ministers of God in every way. We did this with our great endurance through problems, disasters, and stressful situations. 5 We went through beatings, imprisonments, and riots. We experienced hard work, sleepless nights, and hunger. 6 We displayed purity, knowledge, patience, and generosity. We served with the Holy Spirit, genuine love, 7 telling the truth, and God’s power. We carried the weapons of righteousness in our right hand and our left hand. 8 We were treated with honor and dishonor and with verbal abuse and good evaluation. We were seen as both fake and real, 9 as unknown and well known, as dying—and look, we are alive! We were seen as punished but not killed, 10 as going through pain but always happy, as poor but making many rich, and as having nothing but owning everything.

6 “Be careful that you don’t practice your religion in front of people to draw their attention. If you do, you will have no reward from your Father who is in heaven.

5 “When you pray, don’t be like hypocrites. They love to pray standing in the synagogues and on the street corners so that people will see them. I assure you, that’s the only reward they’ll get. 6 But when you pray, go to your room, shut the door, and pray to your Father who is present in that secret place. Your Father who sees what you do in secret will reward you.

16 “And when you fast, don’t put on a sad face like the hypocrites. They distort their faces so people will know they are fasting. I assure you that they have their reward. 17 When you fast, brush your hair and wash your face. 18 Then you won’t look like you are fasting to people, but only to your Father who is present in that secret place. Your Father who sees in secret will reward you.

19 “Stop collecting treasures for your own benefit on earth, where moth and rust eat them and where thieves break in and steal them. 20 Instead, collect treasures for yourselves in heaven, where moth and rust don’t eat them and where thieves don’t break in and steal them. 21 Where your treasure is, there your heart will be also.

We almost had a gaslit fire tonight. Rhonda texted me on Monday, saying the heater at the church would be off Tuesday & Wednesday to allow for the gas line to be properly tested. Not wanting yall to be cold tonight, I said, “Wednesday is Ash Wednesday.” Initially we thought all would be done in time to possibly even have the fire on tonight, by it was decided to wait for the testing tomorrow and Friday. So potentially Sunday we’ll be toasty in here. We had Ash Wednesday service two years ago, even though we knew of the virus making people sick and we weren’t yet sure how to address it. Turns out we had two Sunday services following Ash Wednesday and then pretty much shut down in-person services for 14 months. Last year Ash Wednesday fell on February 17. I had burned 2019 Palm Sunday’s branches for the ashes. We had planned for me to offer drive through imposition of ashes, but that was during the terrible winter storm and ice made travel impossible. So I came to the Celebration Center and did a Facebook live session, just me and my laptop. Tonight we’re back in person for Ash Wednesday, but unlike the words of the hymn we sung, these ashes are not last year’s palm branches; we didn’t have a palm processional in 2021. These ashes came in the mail in a tiny zip lock bag.

There are two creation accounts in the book of Genesis: chapter 1, where I like to say God created as a film director: lights/camera/action. God said this, and it happened. God says that, and it happened. God’s creative power is in voice. The second creation account, shows a different aspect of God’s creativity. God does not create by voice but by touch.

In the first account, the relationship is described by the narrator:

in the divine image God created them,

male and female God created them.”

I’ll read the creation of humanity again, but this time listen not for God’s creative touch, but the source–the stuff–from which people were formed.

Now listen to God’s words as the couple is expelled from Eden:

“by the sweat of your face you will eat bread—

until you return to the fertile land,

since from it you were taken;

to the soil you will return.”

The fertile soil, from which they were created, is now hostile to them–it’s cursed with thorns and thistles. The woman will suffer pain at childbirth, the man will suffer pain farming the soil. The relationships–all of them, between Creator and created, between humanity and nature, are broken. Death is the result.

“You are soil, and to the soil you will return.” Another way to say it is, “earth to earth, ashes to ashes, dust to dust,” traditional words of committal shared at the final resting place following a funeral. Sometimes attendees even scatter soil. Once at the funeral of a Jamaican family when we served in England, the family literally shaped the wet, slippery mud into the form of a human body. Both physical gestures are a reconnection with the soil which is part of the stuff of us; it’s also a reconnection to the One who fashioned us from soil “in the beginning.”

So we come to these ashes, this dirt, on Ash Wednesday. We come to these ashes carrying the heaviness of the last two years, the grief of the loss of six members of Grace in two months, the brokenness of relationships, the fear of war, the violence of our society. We receive them as a physical act, my index finger touching your forehead, marking it with the shape of a cross. Why do we do this? Not for showy reasons, like the ones Jesus warned against: showy religion, showy prayer, showy fasting. No we receive the ashes as an act of repentance: as the prophet proclaimed:

“Yet even now, says the Lord,

and ready to forgive.”

We come to the ashes to be reminded of our mortality, to honor God as the source of human existence, as the only One with authority over human life- over all life. We receive the ashes so that the created can reconnect with the Creator. The apostle pleaded with the Corinthians to be reconciled to one another- to be reconciled with him- and to be reconciled with God. Reconciliation, the refashioning of the relationship broken by the disobedience at Eden, is made possible through the death and resurrection of Jesus, the ultimate example of the redemptive power of grace. Paul says,

So we are ambassadors who represent Christ. God is negotiating with you through us. We beg you as Christ’s representatives, “Be reconciled to God!” God caused the one who didn’t know sin to be sin for our sake so that through him we could become the righteousness of God.”

In addition to receiving ashes tonight, we will receive the Lord’s Supper. We are not only made right with God through reconciliation, but we are nourished for the journey forward. We acknowledge our mortality and are made aware of our reliance upon God for life, but we also leave this place freed from the power of death, made right so that we can become ambassadors, representatives in the world for the One who created, and re-created us.

It has been a long journey back to Ash Wednesday. We have experienced brokenness. We have felt grief and pain. We have done our best to offer and receive comfort. The Holy Spirit, working often in ways we cannot understand or see, has been active in our individual lives and in the life of this community of faith. Tonight, as we receive the ashes and the bread and juice, we remember the faithfulness of God, our Creator, Sustainer, and Covenant Friend. We are made right again, set free from the power of death to pursue social and personal holiness once again, by the power of the Holy Spirit.