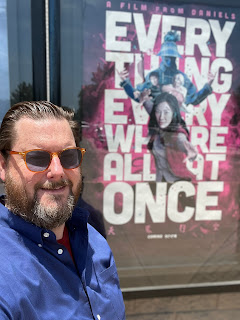 When I first saw the trailer for Everything Everywhere All at Once, I flipped out. It was at the Alamo Drafthouse- can't remember the film I was actually there to see.. but I knew this had to be on my list. Michelle Yeoh is an international treasure, and she has been in a ton of projects recently: Shang Chi, Crazy Rich Asians... so much more. But it was the look of the trailer that sucked me in. Colorful, energetic, fun, stylized.

And then, I had to wait.

The trailer didn't say anything about a release date. In late March and early April I began to see a few tweets about the movie, all raving.. but still.. nothing. And then it showed up. It landed at Alamo first, and I think it even showed up at the Cinemark in Sherman for a week or two. But I couldn't make it work. I feared I would have to wait until streaming and watch it at home. Then I found it in Plano in late June. I went by myself, with a handful of others in the auditorium. It was so much more than I expected. I haven't stopped thinking about it for four weeks.

Trying to describe this movie in terms of genre is difficult. It's a fantasy, an action movie, a little sci-fi.. But at its core, and what I never would have guessed, is a heart for relationships. As they truly are, and as we hope they would be. Relationships with others, and with self.

The story begins in an apartment above a laundromat. An immigrant family is struggling with an IRS audit, as well as making preparations for the family patriarch's visit-- for his birthday. Evelyn, played by Yeoh, is struggling to keep everything in focus and under her control. Her husband Waymond, played by the delightful Ke Huy Quan, on screen for the first time in decades-- if you are a child of the 80s think Short Round from Indiana Jones and the Temple of Doom and one of the kids from The Goonies. He left acting long ago due to a lack of opportunities for Asian actors, but the success of Crazy Rich Asians inspired him to seek work again, I can't say how happy I am for him. The couple has a daughter named Joy.

You immediately sense things are not right in the family. The husband feels disrespected. The daughter, who is gay, feels unseen. There have been many movies depicting the generational trauma of 1st and 2nd generational immigrant families. Parents struggling to make ends meet in a new culture, having left everything in their home country. They place enormous burdens on their children to succeed in the professional classes: doctors, lawyers. There is an emotional disconnect between everyone. Evelyn is so absorbed in her own stress that she cannot function beyond what is directly in front of her. While I do not share the immigrant experience, no family is immune to emotional challenges and struggles.

Flash forward to a meeting at the IRS. Jaime Lee Curtis is the auditor. She wants to help. But Evelyn can't focus. On the elevator, her husband placed two blue tooth devices in her ears. She was told to make her way to the broom closet. The thing is: that guy wasn't her husband. They look the same, but her husband is silly and awkward and kind of a spaz. This guy is a martial artist, like a secret agent. He's from the multiverse.

There have been a ton of movies and tv series involving multiverses recently. Dr Strange, Spider Man, The Flash. What Everything Everywhere All at Once does with the multiverse is what makes the movie special.

So the Waymond in the elevator is not the Waymond of the laundromat. He is a Morpheus type character from The Matrix. He travels throughout the universe looking for the perfect Evelyn to fight the force trying to destroy all the universes. He selects this Evelyn because she is no good at anything. Other Evelyns are martial artists, chefs, opera singers.. whatever. They all excel at something. This Evelyn excels at nothing. This Evelyn is lost in her own stress, her own regret. What if she had been born a boy instead of a girl? Her father would have accepted her. What if she had stayed home instead of running away to America with Waymond? As Evelyn experiences more of the multiverse, jumping between various Evelyns, she spends more time in their meaningful, exciting, interesting lives. She detaches more and more from her own reality.

We learn the "bad" or "evil" force is played by the same actor as the daughter Joy. In one of the alternate universes, Evelyn experimented on her daughter to force her to experience the multiverses. She broke her mind, sending her daughter into a tailspin of despair. Evelyn doesn't know it yet, but the Joy of this life is headed down that same path. The bad force at work in the movie isn't an individual like Smith of The Matrix. Joy doesn't want to destroy anyone other than herself. She wants to erase her existence. She seeks the same Evelyn as Waymond of the multiverse. She wants her mother to erase her own existence at the same time. A real, shared experience. Near the end of the movie, Evelyn is ready to enter into the void. Hopelessness has won.

I wrote recently about the threat of nihilism in our society today. You can check that out here. Nihilism is the belief that nothing has any meaning. It infects our thinking to the point that it fuels our inaction. Since life is ultimately meaningless, why pass loss to limit access to weapons of war? Why limit fossil fuel production? Why fight climate change at all? Joy, and more and more as the movie goes on, Evelyn- succumb to the same kind of nihilistic thoughts. It's best to end our existence than to continue to suffer.

In one of the multiverses, Evelyn, a celebrity actor and martial artist, meets Waymond, himself a wealthy success, at one of her movie premiers. They share a beautiful conversation in an alley. "How dumb would it have been," Evelyn says, "if I had gone with you to America? We'd end up with dead end lives in a laundromat and tax audits." How silly. What a waste. In the most powerful moment of the movie, Waymond says it would be worth it all to spend every moment with Evelyn in the laundromat. Call him silly, disrespect him all you want, I mean the guy puts googly eyes on everything throughout their home and work place, but in the end love is what defines him. Love, not despair.

And it clicks with Evelyn.

She can exist in a world of regret, lost in possible futures of lives that took different directions years ago. She can remain the disappointment of the family, she can remain the "tiger mom" who doesn't see her daughter for who she is- or her husband for who he is. Or she can embrace the love of those around her, reach out to others in love, and discover that her life truly has meaning, regardless of what anyone else may think.

This movie is filled with spectacular effects. It was shot on a tiny budget with a very small team of people doing such creative work. It is filled with visuals I will never forget: a universe where everyone has hot dogs for hands. Kung fu fought with sex toys. It is crazy. Beyond all that, I laughed. And I cried. And I reflected on my own life. The moments of regret that continue to haunt me. The possibilities that could have saved me or others heartache. The temptation to stay stuck in the future multiverses rather than grounded in my current reality. These are battles we fight every day, throughout the day. Those other Franks are great. Successful, constantly having fun, living their best lives. Like the other Evelyns.

But we are living this life. And by the end of the movie Evelyn chooses to save her daughter, and herself, from despair. She accepts the goofy, devoted love of her husband. She rejects her father's rejection of her-- without rejecting him.

Throughout the movie Inception, a line is repeated over and over again. It became a meme, of course:

Don't you want to take a leap of faith? Or become an old man, filled with regret, waiting to die alone?

I keep coming back to that line over and over again since I saw Everything Everywhere All at Once. I'm 51 now, not an old man, but I'm making progress! When I get stuck in that mental and emotional place, I'm going to think of Evelyn. In every reality she experiences, she learns something new. Even in the sausage hands-verse. She learns to love and adapt. She learns to accept her daughter's sexuality because she experiences intimacy, possibly for the first time. She experiences wealth and celebrity and the restraints it places on her person- her privacy. She learns from woman at the IRS audit to accept others' lack of knowledge or skill and show compassion and practice kindness.

That's what makes this movie special, and one of the best in recent years. Technically it is masterful. On about 1/10 of its budget, it looks way better than Thor: Love and Thunder. Not even close. Emotionally it is engaging and challenging. Spiritually it is honest. It asks us to look into the void- the mystical everything bagel at the center of our existence-  and find the depth of meaning to choose to live. It's no coincidence that Waymond and Evelyn's daughter is named Joy. The challenge for all of us, in the face of every feeling of regret or inadequacy, is to choose joy.

So let's just skip the Academy Awards next year.

Best Picture: Everything Everywhere All at Once