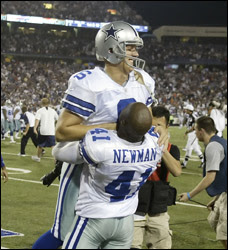 last night was an incredible night in the wide world of sports. after a four-hour marathon the cleveland indians beat the vaunted-- and expensive-- yankees. at the same time, in the same state, the cowboys finished the craziest football game i have ever seen. i finished both games slightly before midnight, but was too emotionally wound up to go to sleep.

i have been a baseball fan since 1986, my freshman year in high school. that world series featured a young former university of texas pitcher, roger clemens. the red sox lost to the mets in a thrilling, if not frustrating and infuriating, series. and i was hooked. that year was also a good one for my hometown astros, who nearly beat the mets in the previous series. for several years, the astros floundered, got better, floundered again. through it all, my all-time favorite players, craig biggio and jeff bagwell, kept my connection to the great game real. last year bagwell retired; this year biggio hung 'em up; and clemens is probably done, too. 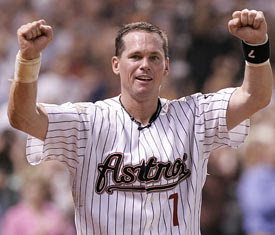 so now i am in a new sports fandom dimension: the players i grew watching and admiring are gone. now i look at teams like the indians, diamondbacks, and rockies and i am thrilled to see so many under 25's excelling. another one of those young guys is the dallas cowboys quarterback, tony romo. last night he put on the worst perfomance i have ever seen-- 5 interceptions and a lost fumble-- and yet brought the team back for an impossible win. seeing the cowboys win in that fashion, coupled with big money teams like both teams from new york given early exits, has been wonderful. it's probably mostly due to envy-- my astros made one world series so far, two years ago. they were swept in four games. it still hurts.

this is what makes sports great, more than just something to watch on tv. there is a sillyness involved that allows fans to say, "we finally won!" or "we'll be better next year." what do we mean we? last time i checked alex rodriguez is not sharing any of his $25 million salary with yankees fans, and as great as they were neither biggio nor bagwell ever sent me a royalty-- or should i say loyalty-- check. but when the cowboys rookie kicker nailed the winning field goal not once but twice from 53 yards away, i was a crazy as the players on the field.

that is the magic of sports. when our team succeeds, we win too-- and when they lose we hurt. i wonder sometimes about the players themselves. how distraut are the buffalo bills or yankees today, compared to their fans? not even close! through sports we are somehow allowed to achieve ups and downs, thrills and heartbreak, we never could-- ordinary and average as we are. our allegiance to a team creates a sense of community that is unlike anything else.

even the writers of the bible understood the importance of sports as metaphor: 2 timothy 4.7 says, "i have fought the good fight, i have finished the race, i have kept the faith." hebrews 12.1 says, "therefore, since we are surrounded by so great a cloud of witnesses, let us also lay aside every weight and the sin that clings so closely, and let us run with perseverance the race that is set before us..."

so next time you or your loved one is determined to spend his/her evenings glued to the tv watching sports, remember: they are engaging in serious emotional and intellectual exercise, even theological activity. tonight and tomorrow night i'll get a little rest, then new baseball series start thursday and friday night. i'll be prepared for anything.
Email Post