Observations from My First-ever Trip to Aggie 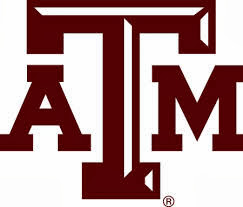 So my friend David (A&M Class of '89) and I traveled to College Station yesterday for A&M/SMU. Christy scored us these tickets courtesy of the Athletics Department at SMU (thanks!). I had been to College Station once in my life-- twenty years ago when I went there for the Social Science Composite test to be certified to teach. I had never been to the A&M campus. Full disclosure: I grew up a UT fan, went to school there for a couple of years, before moving on to Sam Houston State in Huntsville, graduating in '93. I earned a Master's degree from SMU in 1999. Anyway, David and I left Dallas shortly after noon. Kickoff was scheduled for 6:00 p.m. We purchased meal tickets at the SMU Alumni tent for 4:00. Along the way, a three hour drive from Dallas, we talked about several things, one of which is a long-term vision for ministry at Custer Road that I will discuss later-- and I'll owe David some sort of consultation fee for his expertise. On to football. Here are some non-football observations, not necessarily in order of importance, from our trip to Aggie:

1. Park at the mall and ride the shuttle. It's free, there are a ton of shuttles, and they are packed with folks. We got to Kyle Field in about ten minutes, and more importantly, back to the mall and out of town unbelievably quickly. Kudos to everyone on this deal.
2. Aggies are the friendliest fans in the world. They have to be. Now, I was wearing full SMU gear, bright blue and red in a SEA of maroon. I heard more "howdy"s than I can count. One guy in the student center patted me on the shoulder and said, "Welcome to Aggieland." This was almost certainly because they were feeling sorry for me. They knew SMU's chances were close to zero-- I did too, for that matter. I had said to David as we left Dallas that I felt like the animals to be sacrificed before the Day of Atonement.
3. After we left College Station I was pulled over on Highway 30 for speeding-- 68 in a 60. The officer looked about 19 or younger. I thought I was talking to one of my children. It felt really awkward saying "No sir" to such a young guy who asked if I was in a hurry. He asked if we had been to the game:
"Yes."
"How did it go?"
"Well I'm an SMU guy, so pretty bad."
"What was the score? I haven't seen it yet."
"42-13."
"You're on your way back to Dallas?"
"Yes sir." (Awkward again.)
After a few minutes he came back with a warning. Whew. Police in Grimes County are generous and compassionate. Would I have received a ticket if the game was close? Or what if SMU had won?
4. Thankful for a pit stop in Corsicana around 12:30. I was absolutely exhausted. A Starbucks Frappuccino, the absolutely sub-zero temps in the gas station, and a brief walk around the pumps got us home successfully and safely around 1:30 a.m.
5. As I Tweeted this morning, 6:00 AM came awfully early today.
6. Highlight of the trip: As we were walking to the Alumni Tent for dinner, we passed an SMU cheerleader who noticed my shirt. She smiled at me and gave me the SMU sign. Like the guy on Peruna's right in this picture: 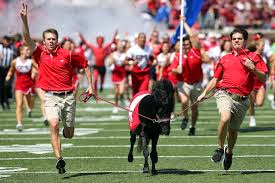 I turned to David and said, "That's the first time in my life a cheerleader has acknowledged my existence." You're welcome.
7. I WAS ON TV. 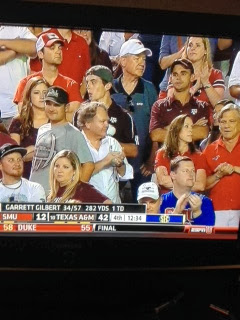 Here are some football thoughts:

1. Gosh were there penalties. SMU totaled 16 penalties for 111 yards; A&M had 13 for 114 yards. They were deadly-- especially for SMU in the first half. Several drives stalled or ruined. This also made the first half last TWO HOURS.
2. Gilbert looked great. 37/62 passing for 310 yards. The % is not good, but he was decisive and locked in. Lots of drops by receivers.
3. A&M missed three extra points. Never seen that. I credit SMU somehow, but I'll admit it's fishy.
4. Manziel may be a knucklehead, but he is a beast. If you know anything about college football this is not news.
5. Two excellent bands. I respected how the A&M fans, accustomed to band excellence, respected the Mustang Band. I loved sitting immediately behind the Best Dressed Band in the Land.
6. Out of the 86,000+ fans there, under 1000 were for the Ponies. But hey, we were pretty loud. Louder than at Ford Field, actually. One woman was screaming, "HOLD "EM!!!" with literally under a minute left and the score 42-13. Rock on. 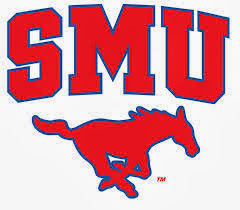