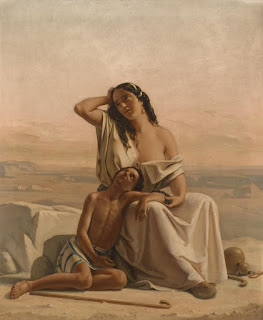 Not sure what a narrative sermon is? Check out last week's post.

They grew up in different countries, spoke different languages, worshiped with different traditions. Though they had different roots, both lived in an oppressive, patriarchal societies where women were viewed as little more than property. As strange as it sounds to modern ears, in biblical times the value of a woman's life was determined by her relationship to men: her father, husband, sons. If these relationships were healthy, she had value; if these relationships didn't exist, she herself might as well not exist.

So it would not have been unusual at all for Sarai's husband to insist that she introduce herself to powerful men as Abram's sister, rather than wife. This happened to her at least twice, first to the king of Egypt, then the king of the Philistines. When Pharaoh bought Sarai as a wife, Abram acquired great wealth: herds of sheep and goats, and at least one slave, Hagar the Egyptian. When Pharaoh learned of the Sarai's true identity, he ordered Abram and Sarai to leave Egypt and return to Canaan, taking their possessions with them, including Sarai's slave Hagar.

It has been many years since she and her husband left Ur and settled in Canaan. And still God's promise of a child for her husband had not been fulfilled. Sarai was barren (Genesis 11:30), believing God had cursed her-- again, a normal thought of the time. So she instructed her husband to lie with her servant Hagar in order to have a child. Since Hagar was Sarai's slave, Hagar's son would be Sarai's property. She "gave" Hagar to Abram as a wife; Abram went along with the plan without any response. Things went from bad to worse when Hagar conceived. Now, she believed, she had superiority over her mistress Sarai, made very clear in non-verbal communication. Sarai complained to her husband: "Look what you have brought upon me!" Abram, summoning all the power given him by the patriarchy, shrugged and said, "She is in your power; do with her as you wish." Sarai treated Hagar harshly. The narrator even uses the same language to describe Hagar's abuse as describes the Hebrews' abuse by Pharaoh in Exodus 2. So the pregnant Hagar ran away.

She headed for the wilderness of Shur, south of Canaan, on the back to her homeland. In Egypt she could raise her child free from abuse, with her family, friends, and familiar culture. But she was interrupted on the journey. An angel of the Lord appeared to her, asking where she was going. "I am fleeing from my mistress," she said. The angel urged her to return to Abram and Sarai and to endure whatever harsh treatment she faced. God was with her, and with her son, whom she would name Ismael-- meaning "God hears." Then an amazing thing happened. Hagar becomes the only person in the entire Bible to name God: "You are el-Roi," which means God sees-- as in God sees me. Then she names the well where the conversation took place. She calls the area beer lahai roi, meaning "I have seen God and lived." She returns to Sarai and Abram.

After a few more years, Isaac is born to Sarah and Abraham (God changed their names in Genesis 17). Sarah sees the two half-brothers playing one morning, and instead of her heart filling with joy and love, she is bitter and jealous. She goes to her husband and says, "Now that the Promise is fulfilled with my son Isaac, that slave and her son have to go." This grieves Abraham, but God encourages him to do what his wife says. God promises to bless Ishmael because he is Abraham's son, but the Promise will be fulfilled through Isaac. So Abraham fills a canteen of water, gives Hagar a loaf of bread, and sends mother and child into the wilderness, alone.

After the last drop of water and crumbs of bread are gone, both are starving and thirsty. Hagar knows the boy is near death so she lays him under the shade of a tree, protecting him from the sun. She moves a small distance away so she will not see the death of the child. But again, an angel of the Lord appears to her. God has heard her cries, as well as Ishmael's. Remember Ismael means "God hears." God opens Hagar's eyes (remember she named God "God sees" in Genesis 16) and she sees a well. She gives the boy a drink. The angel assures her that God will bless her son-- he will grow into a great nation. Today, Muslims trace their spiritual ancestry to Abraham through Ishmael. There is even a tradition that Ishmael and Abraham rebuilt the shrine at Mecca together.

Modern day Jews and Muslims have some enmity, but for centuries Jews and Muslims lived together in community. When the angel appears to Hagar the first time, she is told, "He shall be a wild ass of a man, his hand against everyone, and everyone's hand against him..." (Genesis 16:12), but there is no biblical evidence of this hostility. In fact, Ishmael and his half brother come together again in Genesis 25 to bury their father. It was the first time they were together since Sarah saw them playing together as children. We also know from later in the biblical history that King David took an Ishmaelite woman as a bride (1 Chronicles 2:17). We are told Isaac's homeplace was settled near the well Hagar named beer lahai roi, and Ishmael settled in the wilderness of Shur, where Hagar originally fled from Sarai's abuse. Those two areas are only about 100 miles apart.

The story is ultimately about the heart of God, who sees/hears/acts on the behalf of those who suffer injustice. This is same heart of God we see in Mark 5:34, the story of the woman who had been bleeding for a dozen years. Her illness cur her off from community, but she breaks cultural norms by reaching out to touch Jesus' cloak as he walks past. Jesus feels the healing power leave him, and asks, "Who touched me?" The woman comes forward and kneels before him in shame. But he reaches down and lifts her up with the words, "Daughter, your faith has made you well." Calling her daughter restores her to community and relationships. Hagar is restored as her son is given water and his own share of the Promise.

I'll end with this question: Who are the contemporary Hagars and Ishmaels amongst us, and how to we deal with them? As the Church, the embodiment of God's love and grace, we are to see each person as a son or daughter of God, made in the divine image, worthy of respect, honor, and justice. We are to look upon those who suffer with the same compassion as God looked upon Hagar and Ishmael in the wilderness. The story affirms these truths: God sees, hears, and acts in the midst of human suffering. May you and I see, hear, and act in the midst of human suffering. In the name of the Father, the Son, and the Holy Spirit. Amen.
Email Post