Yesterday morning I tweeted this, reflecting on the style of sermon I was offering:

This was somewhat confusing to some, so I'll clarify its meaning. And share the experience of trying out a new format for sermons: Narrative preaching. Yesterday was the first Sunday of a new sermon series on Genesis. I am a Lectionary preacher, so I am following the outline of the texts listed there, for the most part. The Sunday before last, June 11, was Trinity Sunday. Genesis 1:1-2:4 was the assigned Old Testament reading for the day, but Pastor Leon preferred to preach from the Matthew and 2 Corinthians texts. The next Sunday, June 18, the Lectionary jumped to Genesis 18:1-15. Cain and Abel, Noah and the Flood... skipped. And several vital interactions with Abraham, specifically Chapters 12-17, were skipped. So we jumped from Creation to Sarah laughing from her tent in one week. Okay.

After June 18, the sermon series based on Lectionary texts goes to:


The Lectionary texts this summer do not introduce Abraham, one of the key characters of the Old Testament; instead it relays one story and moves on to his sons, grandsons, and great grandsons. I can't deal with that. In a conventional sermon on Genesis 18 I would have to introduce Abraham and Sarah and the Promise which made both of them laugh. The Promise of an heir to Abraham is one of the central tenets of Judaism, Islam, and Christianity. Skipping those stories, as the Lectionary does, robs Genesis of one of its underlying pillars-- the covenant between God and Abraham and Sarah. Then moving on to an adult Isaac's marriage to Rebekah skips the horrendous tale of Genesis 22, the completion of all the talk of the Promise in the previous ten chapters of Genesis. No, No, No.

For sermon planning, I was stuck in a difficult place: many church goers know the Abraham story. But many do not. Or they know only the highlights: Abraham followed God, Sarah went with them, they had a baby when they were both in their 90s, Abraham believed in God, God is faithful to God's promises. It's all good stuff, but it misses so much. Thankfully last week I pulled off the bookshelf a book I hadn't read in a while: Preaching Old Testament, by my former preaching professor and colleague in ministry Dr John Holbert. Here's one of the advantages of narrative preaching Holbert shares:

All ears prick up when the advent of a story is announced. Just say, 'Once upon a time,' and watch your hearers' anticipation play across their faces and surface in their eager movement toward you. If the first aim of preaching is to be heard, then a narrative, almost inevitably, will gain a hearing. If a second aim of preaching is to involve the hearers, then a narrative wins high marks on this score as well.

Based on my own observations of the congregation during the sermon, plus the feedback following worship, I absolutely agree with John. People were engaged and listening, including many who normally become distracted during a traditional exposition/teaching sermon. Here are some of the comments I heard from people after worship:
"I loved that story."
"What a great way to share the whole story."
"I loved the narration approach."
"I really enjoyed that today."

Holbert even offered a sample narrative sermon on the sacrifice of Isaac story (Genesis 22) in Chapter 4 of his book. He used a metaphor of laughter throughout his sermon. In mine, I used a metaphor of a "well-worn leather suitcase," since Sarah and Abraham were life-long travelers. I brought my father-in-law's old leather suitcase, which I pulled out at the beginning of the sermon: 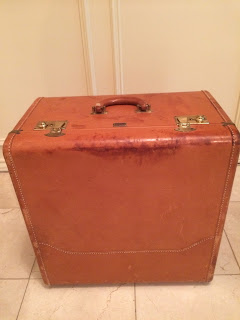 As I planned the sermon, I felt it was important to give a full context to Genesis 18. I briefly told the stories from:
I began and ended the sermon with some exposition, so it was not 100% narrative; there was one takeaway for the congregation. I don't know how often I will use narrative preaching, but it is perfect for books like Genesis, Exodus, the Gospels, Acts, which are almost entirely narratives. I know those stories well, and I was comfortable preaching in this way. Honestly, it was the best sleep on a Saturday night before preaching in a long, long time.

So preachers: give it a shot! It's fun. Buy John's book: $18 on Amazon. Layfolk: encourage your preachers to try a new method. Summer is a fun time to take a risk in worship. Take a listen to the sermon and let me know what you think: