Hope Does Not Disappoint

I became a solo pastor for the first time in 2003. I was determined to do things in new ways, and the right way. You will be shocked to learn I made a few mistakes then-- and one or two in the sixteen years since! But my biggest mistake ever was the decision to preach a sermon series on the Book of Revelation during Advent.

It makes perfect theological sense: Advent is a time before Christmas of spiritual preparation for Christ's ultimate, triumphant return. That theme is why the Revelation exists in the first place! But here's what I learned: the best theological reasons will not stand against people's need to hear Jesus/Joseph/Mary/The Star/The Manger in December. People will get angry or just stayed home. That year, in that church, both of those things happened!

Let's get some housekeeping things out of the way first. 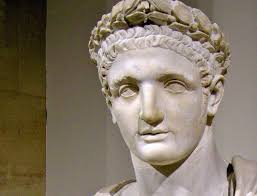 John was exiled to the Roman penal colony Patmos for teaching about Christ. This most likely happened during the reign of the Roman emperor Domitian, who persecuted Christians. John's vision is to be shared with seven churches in modern Turkey: 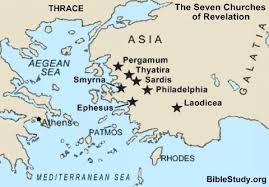 The main idea of the book is to encourage those seven churches to remain faithful to Christ in spite of their present circumstances. In that frame of mind, Revelation isn't that different from some of Paul's letters. What is different is the format. It's not a letter; it's not even prose. It's a poem. Poetry will frustrate anyone who tries to read it in the same way one would read a novel. The word poet means "maker," creator. It's the language of imagination. Many Christians refuse to approach Revelation differently than other biblical books. So they become frustrated, looking for clues to solve some hidden mystery. Or they think of it as an almanac, a resource for future planning for the weather or farming. Some Christians have gone so far to read this book literally, hoping and even working toward open war in Israel in order to bring about Christ's triumphant return to earth. As is God needed our help with the timing.

GK Chesterton said, "Though St John the Evangelist saw many strange monsters in his vision, he saw no creature so wild as one of his commentators."

I mentioned last week that several of us from Grace attended Youth 2019 in Kansas City. One of the workshops I attended was hosted by three Native American youth. They each shared stories of the work they have done to preserve their heritage. One actively speaks out against Native people used as advertising, weapons (think Apache helicopters and tomahawk missiles), and as mascots for sports teams. Another works with Rosetta Stone to teach Native languages, which are on the verge of extinction. Another protested the Standing Rock pipeline construction, which threatened Native holy lands, specifically the water supply.

I couldn't help thinking, "When I was sixteen all I cared about was attending Def Leppard concerts!"

Those young people are using their gifts to persevere in trying times-- exactly the sort of people John addressing with his vision. He is meant to deliver specific messages to each of those seven churches, but also a general message for the church in every time and place:

Do not assimilate in the broader culture of the empire. Do not worship the emperor. Do not worry so much about your livelihood, your life, security, or status that you compromise your faith to keep them.

A profound word of hope, Revelation offers a vivid experience-- not explanation-- of the final judgment. War between good and evil breaks out in heaven, and the God of justice defeats all that is evil. It's not a warning against hell in the afterlife; it's an affirmation that the Righteous One is always on the side of the oppressed. When earthly powers seem to win in the short term, heavenly powers always win in the end. For the 1st century martyrs, victimized by the empire for refusing to worship its emperor, Revelation is a powerful word. Martyr, after all, is the Greek word for witness. Even in their deaths, their witness for Christ was honored. For oppressed communities today it has the same message. For those abusing the weak, it casts a clear warning.

I learned something new this week; like Matthew and Luke, Revelation has beatitudes, blessings promised to the faithful:
1. “Blessed is the one who reads aloud the words of the prophecy, and blessed are those who hear and who keep what is written in it; for the time is near” (1:3).
2. “And I heard a voice from heaven saying, ‘Write this: Blessed are the dead who from now on die in the Lord.’ ‘Yes,’ says the Spirit, ‘they will rest from their labours, for their deeds follow them’” (14:13).
3. “(‘See, I am coming like a thief! Blessed is the one who stays awake and is clothed, not going about naked and exposed to shame’)” (16:13).
4. “And the angel said to me, ‘Write this: Blessed are those who are invited to the marriage supper of the Lamb.’ And he said to me, ‘These are true words of God’”
(19:9).
5. “Blessed and holy are those who share in the first resurrection. Over these the second death has no power, but they will be priests of God and of Christ, and they will reign with him for a thousand years” (20:6).
6. “‘See, I am coming soon! Blessed is the one who keeps the words of the prophecy of this book’” (22:7).
7. “Blessed are those who wash their robes, so that they will have the right to the tree of life and may enter the city by the gates” (22:14).

I'll never preach on Revelation during Advent again, but I will not lose sight of its hopeful message to those who suffer. Do not be so afraid of what happens in this life that one compromises the faith. Over and over in the book Jesus says, "Come." It's an invitation to a life without fear and death. Come. In the name of the Father, the Son, and the Holy Spirit. Amen.
Email Post