Get Out of Your Feels 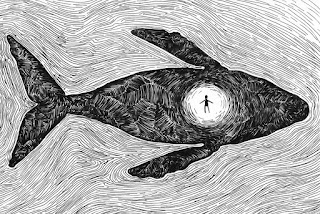 It's easy to envy someone like Jonah. Nowhere in the scripture is there a prophet more successful in the ministry they are called to. Jonah's ministry is focused on the outsiders, the ones who are not inside the walls of the church, but those on the periphery-- the mission field, we would say today. And his success in reaching those people most of us would ignore or claim are beyond God's mercy is unparalleled.

Yet Jonah was a reluctant prophet; everyone knows when God called him to go to Nineveh, the capital of the powerful Assyrian Empire, a place of evil and murder, he said, "thanks but no thanks" and tried to run from God. Hiring a ship going in the opposite direction, Jonah soon finds himself in a raging storm. Sleeping. The sailors, who have no relationship to Jonah's God, know something is wrong-- supernatural-- about the storm. Nothing they try works. They begin to plea for mercy. Awakened by the storm, Jonah appears and says he is to blame. He is running from God.

The sailors cry out to God: "Have mercy! Spare us! We didn't ask this guy to come with us!" Jonah says, "No it's simple. Just toss me overboard and you'll be fine." Not wanting to engage in human sacrifice to an unknown God, they resist; they pray and worship. Jonah is reaching people who do not know the one true God. But his evangelistic success is not enough; they toss him overboard.

Jonah is then rescued (???) by a giant fish, who swallows him whole and u-turns, bringing him back to Joppa so that he can fulfill the mission to the Ninevites. As he is being delivered, or digested, depending on your point of view, Jonah offers a prayer to God:

A Psalm of Thanksgiving
Then Jonah prayed to the Lord his God from the belly of the fish, saying,
‘I called to the Lord out of my distress,
and he answered me;
out of the belly of Sheol I cried,
and you heard my voice.
You cast me into the deep,
into the heart of the seas,
and the flood surrounded me;
all your waves and your billows
passed over me.
Then I said, “I am driven away
from your sight;
how shall I look again
upon your holy temple?”
The waters closed in over me;
the deep surrounded me;
weeds were wrapped around my head
at the roots of the mountains.
I went down to the land
whose bars closed upon me for ever;
yet you brought up my life from the Pit,
O Lord my God.
As my life was ebbing away,
I remembered the Lord;
and my prayer came to you,
into your holy temple.
Those who worship vain idols
forsake their true loyalty.
But I with the voice of thanksgiving
will sacrifice to you;
what I have vowed I will pay.
Deliverance belongs to the Lord!’
Then the Lord spoke to the fish, and it spewed Jonah out upon the dry land.

Our son James has a saying he'll throw around when one of us being whiny: "Get out of your feels!" Don't you want to say that to Jonah? He's not crying out to God from the belly of Sheol, the place of death; he's crying out from the belly of a fish! And the idea that God cast Jonah into the depths of the sea is rich, isn't it? He longs to see God's Temple and hopes God hears his prayers from God's Temple. Is this why Jonah runs to Tarshish, because God can only reach as far as the city limits of Jerusalem? And this business about his life ebbing away... no, he was sinking into an ocean of his own making. God sent the fish before Jonah ever requested anything.

When Jonah arrives in Nineveh, he finds a gigantic megalopolis, the capital of the powerful Assyrian Empire. No one there has ever heard of the God of Israel, the small, insignificant territory under the Empire's control. But Jonah walks throughout the city, announcing "Repent or God will destroy you all in 40 days!" How does the King, the most powerful person on earth, respond to this? Place Jonah in stockades in the town center? Stone him or hang him from the nearest tree? Nope. Everything living thing, human and animal, including His Majesty himself, must repent. In the history of the prophet-God relationship, no one has been this successful. Jonah will have fame and glory, become a celebrity pastor at a mega church. He's got it made.

Except he cannot get out of his feels.

God accepts the Ninevites' repentance. The Nineveh Mission is so successful that God will not destroy the people. Jonah should be thrilled, but he cannot deal with it. Turns out Jonah is one of those people who pout when their image of God is challenged; do you know anyone like that?

Jonah’s Anger
But this was very displeasing to Jonah, and he became angry. He prayed to the Lord and said, ‘O Lord! Is not this what I said while I was still in my own country? That is why I fled to Tarshish at the beginning; for I knew that you are a gracious God and merciful, slow to anger, and abounding in steadfast love, and ready to relent from punishing. And now, O Lord, please take my life from me, for it is better for me to die than to live.’ And the Lord said, ‘Is it right for you to be angry?’ Then Jonah went out of the city and sat down east of the city, and made a booth for himself there. He sat under it in the shade, waiting to see what would become of the city.

The Lord God appointed a bush, and made it come up over Jonah, to give shade over his head, to save him from his discomfort; so Jonah was very happy about the bush. But when dawn came up the next day, God appointed a worm that attacked the bush, so that it withered. When the sun rose, God prepared a sultry east wind, and the sun beat down on the head of Jonah so that he was faint and asked that he might die. He said, ‘It is better for me to die than to live.’

Jonah Is Reproved
But God said to Jonah, ‘Is it right for you to be angry about the bush?’ And he said, ‘Yes, angry enough to die.’ Then the Lord said, ‘You are concerned about the bush, for which you did not labour and which you did not grow; it came into being in a night and perished in a night. And should I not be concerned about Nineveh, that great city, in which there are more than a hundred and twenty thousand people who do not know their right hand from their left, and also many animals?’

Get out of your feels, Jonah! Jonah is the older brother in the Prodigal Son story: "Dad, I've always been faithful to you and done everything you said. But you never threw me a party!" "Wah!" Jonah would be the guy at the foot of the Cross, crying out when Jesus forgave the penitent thief. "Jesus, remember me, when you come into your kingdom," he says in agony. "Today you will be with me in paradise," Jesus responds. "Wah! He deserves punishment! He did the crime; not it's time to do the time!" Jonah even climbs a hill to get a skybox seat for the destruction of Nineveh. He's ready to see some destruction! "They are evil; they deserve this!" he thinks, eating his popcorn. God sends a bush to shelter Jonah from the sun, and Jonah is happy about that, until the bush dies the next day. "What good does your anger contribute to this situation Jonah?" No answer; that's how the story ends.

Jesus remembered the story of Jonah as a parable for his own future suffering:


Then some of the [religious leaders] said to him, ‘Teacher, we wish to see a sign from you.’ But he answered them, ‘An evil and adulterous generation asks for a sign, but no sign will be given to it except the sign of the prophet Jonah. For just as Jonah was for three days and three nights in the belly of the sea monster, so for three days and three nights the Son of Man will be in the heart of the earth. The people of Nineveh will rise up at the judgement with this generation and condemn it, because they repented at the proclamation of Jonah, and see, something greater than Jonah is here!
- Matthew 12:38-41

The the belly of the fish is Jonah's tomb, not the place to await his salvation. Jesus was also in a tomb for three days, but stepped in to new life on the other side of death. Jonah, in a sense, never left the fish's belly, because he is overcome by anger, ego, need for control, and narcissism. Jonah suffers from them all. It's really all he has; his uncontrolled passions. He can't escape God by running. He can't manipulate God with his platitudes. He can't persuade God with his lazy, convenient worship. He can't stand in awe of the presence of God's amazing mercy and grace. He'd rather die than live in a world where his understanding of God is challenged and he doesn't constantly get his way.

Of all the weird elements in the story, Jonah himself is probably the least weird; more like us than we'd like to admit. And there is God, ready to send Jonah, and us, out into the mission field to reach populations who do not know God. If only we'll get out of our feels. Or our tombs. Or the bellies of the fish.
Email Post