In some ways, football is my oldest friend. I played football in middle school and part of high school, but I have always been a fan. Growing up in Bay City, about an hour south of Houston, I grew up a fan of the Houston Oilers, before they ceased to exist in the late 1990s. One year for Christmas my Aunt Pam made me a crocheted Oilers helmet: 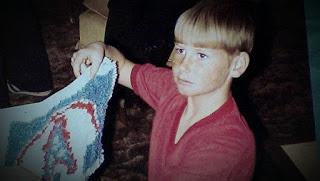 And I still have it!


My cousin Ron, who was a month younger than me, was a Cowboys fan, so of course Aunt Pam made him a Cowboys crocheted helmet. I was about nine or ten at the time, meaning this was right around the time the Oilers lost to the hated Pittsburgh Steelers in consecutive AFC Championship Games, 1979 and 1980. We'll discuss those painful years, and really any year the Oilers made the playoffs, next week as we address dealing with disappointment. I have much to say about that (Love Ya Blue!). When the Oilers became the Tennessee Titans I was without a pro team for several years. Eventually I decided to adopt the Cowboys, a team I hated almost as much as the Steelers growing up. My favorite college team has always been the Texas Longhorns.


Bay City has been a high school football powerhouse before falling on tough times recently. The Blackcats won state titles in 1983 and 2000 and made the playoffs nearly every year. I played football in middle school and my first two years of high school. Like my sons James and Linus I played on the offensive line, but I also played on the defensive line. I swam through old yearbooks the other day and found some photos: 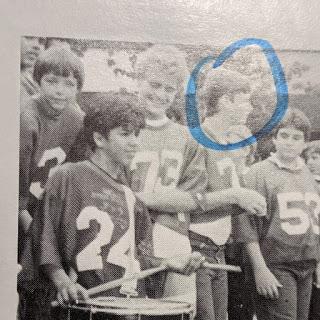 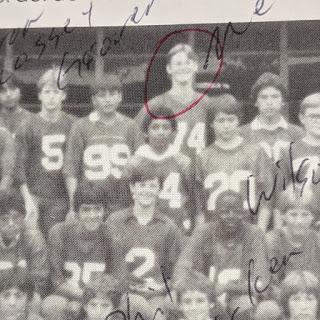 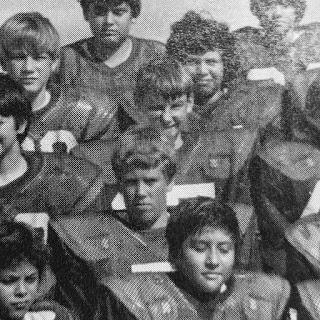 I'm not sure why I felt the need to circle my own face in my yearbooks, but the 7th grade team was one to remember. I played on the Bay City Junior High Kittens B team. The Kittens; not exactly a frightening opponent! That year we lost every game, but even more impressive: we did not score a single point all season. I remember playing defense on one play, dropping back into coverage-- which was not my assigned role-- and breaking up a certain TD pass. In high school I once blocked a punt. On another play received a ridiculous penalty for my hand falling on this guy's facemask after I pancaked him. After a couple years of mostly mediocre play, I turned in my shoulder pads and the 2-a-days and embraced my trombone in the band full time. But my love for the game has never faded.


If you're not a football fan, don't worry; we're not going to spend three Sundays sharing stories or examining plays. But the game does teach life lessons that are important for anyone to learn, whether they understand the sport or not. When I asked James what his #1 lesson from football was, he said: never give up. Always work hard. So we'll begin our series learning about perseverance. I had the privilege of interviewing Coach Loren Dawson of Austin College. Here is what Coach Dawson said about his program's priorities for its student athletes:

Sounds pretty good, right! I don't know if he takes out of shape old guys, but I was ready to sign up. The truth is football, really any team based sport, has lessons to teach other, whether we are athletes or not. A great place in the Bible to look for life lessons, or wisdom to use the theological term, is the Book of Proverbs. Here's today's word from Chapter 10:


Becoming a righteous person is the goal of the Christian faith. God shapes each of us by grace, transforming us into the image of Jesus Christ. But this "righteous making" doesn't happen overnight. It takes commitment. When I asked my oldest son James the #1 lesson he has learned from football, he said, "Work hard and don't give up." Perseverance.


This week the Dallas Morning News ran an article about Carson Winters, a senior at Flower Mound High School. Carson is a wide receiver, meaning his job is to catch passes. He's 6'1", 210 pounds; what James would call a "flat belly." Last April, the team finished their spring football with a full pads, 11 on 11 practice game. Carson went out for a pass, the quarterback through him the ball, he reached out to grab the ball, and was hit. It was a routine, clean hit, but it was not routine for Carson. He suffered a major abdominal injury, the kind of injury often seen in car accidents. He spent the next three weeks in the hospital. During that stay he lost 45 pounds. But Carson was determined to play again. The article said he and his dad wrote out a plan on the whiteboard, and when they ran out of space they continued writing on the windows. With all of Carson's doctors' blessings, they figured if he worked hard for four months and consumed a 5000 calorie diet, he could be ready for the start of the season. And he did it. Not counting his game this week, Carson has scored four touchdowns so far, including one on the exact same play in which he suffered his injury.


Carson is a great example of perseverance! But this kind of determination doesn't come out of nowhere. God is shaping us into the players we are meant to be, but we have to put in the work to fully realize God's vision for our lives. In the United Methodist tradition, that is done through careful reflection of how we live. We believe, but we also act. We are blessed, but we also bless. We put in the work through prayer, regular worship, receiving the Lord's supper, study of the scriptures, fasting, and abstinence. Those are the conditioning exercises faithful Christians do, like the dreaded off season conditioning of football players. We support the church with our prayers, presence, gifts, service and witness. Those are the commitments we agree to when we become a member of a United Methodist congregation. These are the team rules, setting up accountability between players and coaches so that everyone is able to achieve their common goals. Here at Grace UMC, that means living in to our vision: Embrace All, Engage with Jesus, and Expand the Kingdom.


Like football or any team sport, our success is dependent on every player fulfilling their role on the team; we'll come back to this idea in week three of the series: you can't win if you don't get in the game!


Speaking of perseverance, I couldn't help but imagine this well known text from Ephesians describing a football player's uniform, rather than a Roman soldier's armor. Just substitute thigh pads and shoulder pads for the breastplate, the sword, and everything else:

The Whole Armour of God
Finally, be strong in the Lord and in the strength of his power. Put on the whole armour of God, so that you may be able to stand against the wiles of the devil. For our struggle is not against enemies of blood and flesh, but against the rulers, against the authorities, against the cosmic powers of this present darkness, against the spiritual forces of evil in the heavenly places. Therefore take up the whole armour of God, so that you may be able to withstand on that evil day, and having done everything, to stand firm. Stand therefore, and fasten the belt of truth around your waist, and put on the breastplate of righteousness. As shoes for your feet put on whatever will make you ready to proclaim the gospel of peace. With all of these, take the shield of faith, with which you will be able to quench all the flaming arrows of the evil one. Take the helmet of salvation, and the sword of the Spirit, which is the word of God.

So let's go out there, Grace Team, wearing the shoulder pads, cleats, and helmet of faith. Work hard, do the things that make you a successful Jesus lover and follower, overcome whatever obstacles come your way, and win the opportunity presents itself, win for the sake of our Head Coach, Jesus Christ.


In the name of the Father the Son, and the Holy Spirit, we play. Amen.
Email Post