Wonder Women of the Exodus 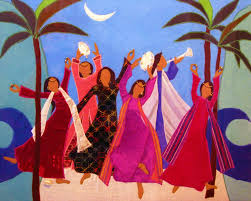 Why do people put themselves at risk to do what is right in the face of powerful forces that do wrong?

I typed that question out this morning and then left it sitting here unanswered while I went to the Celebration Center to pray before worship. I come in here, sit down, and open my prayer book to the 3rd Sunday after the Epiphany, and read these two scriptures:

‘The Spirit of the Lord is upon me,

because he has anointed me


He raises the poor from the dust,

Why do people put themselves at risk to do what is right in the face of powerful forces that do wrong? Because someone has to act on behalf of the powerless. Persons of faith step into these uncomfortable places it's the purpose Jesus himself articulated for his ministry. But it isn't just persons of faith who put themselves at risk to do justice, love mercy, and walk humbly. Persons of all faith, and persons of no faith, must unite their voices, hands, and will to defy evil wherever it presents itself.

As we begin a new sermon series today, let's listen for the whys rather than just the whats when we explore the stories of some of the faithful women of scripture. Some of the Wonder Women of the Bible will be familiar to you; others will be new. Some are named, some are anonymous. And this is not meant to be an exhaustive list of biblical women; there are many giants of the scriptures who will not show up in this series. But for those stories we do share, why did they do what they did? What inward inclination or outward call pushed them in to the spotlight? And how can we learn to be more faithful witnesses for Christ in the world by their example?

We'll begin with an insane decree from a paranoid king. At the end of the Book of Genesis, the first book of the Bible, the Hebrew people have settled in the land of Goshen in Egypt. Under the leadership of Joseph, Egypt not only survived during a brutal, seven-year famine, it thrived; people from all over came to Egypt for food. Even the Egyptian people themselves were forced to become serfs of Pharaoh's empire (Genesis 47:25). Pharaoh received a 20% tax on every item produced in the kingdom, on top of the private land rights of every citizen. As a reward for brokering this deal and saving Egypt from the famine, Joseph's family is allowed to resettle from Canaan to Egypt.

Years later, a new king, who did not remember the story of Joseph, rose to power. This king feared the immigrants in the land, believing they would overrun the kingdom, so he enslaved them. Harsh treatment was ordered. Yet in spite of all this raving, the Hebrew population continued to grow. As God said to Adam and Eve at Creation, "Be fruitful and multiply, and fill the earth with your descendants." Well, God's people in Egypt were being fruitful and multiplying throughout Egypt, and the Pharaoh was paranoid and afraid. Pharaoh increased his cruelty. The Israelites continued to grow in population in spite of it.

So the king comes up with a desperate, evil plan: he will instruct the midwives who facilitate the births of the Hebrew children to kill the boys. Girls were allowed to live. The two women, Puah and Shiphrah, refused to comply. It's interesting that the names of these midwives are remembered, while the name of the powerful Pharaoh is forgotten to history, subverting Pharaoh's authority. The text is ambiguous about the women's nationality. They are referred to as the Hebrew midwives, which could mean they were Israelite women, or they were Egyptian women whose job it was to be midwives to the Hebrew people. Who knows? They defy Pharaoh and let the boys live.

No one stands up to Pharaoh. He calls them back to the palace: "Why are you doing this? Why are you letting the boys live?" They respond by throwing shade on Egyptian women: "Because Hebrew women are not like Egyptian women. They're much stronger and give birth even before we show up!" Your slave women are stronger then your subjects! For their faithfulness, the text says God gave both women families of their own. Flabbergasted, the king orders every Egyptian subject to murder the Hebrew boys. Girls can live. Can you imagine? Ordinary citizen forced by the empire to murder children?

One woman went to extremes to protect her son, placing him in a tiny ark and pushing it down the Nile River. The child's sister, later named as Miriam, followed the tiny ark's progress. Another woman, an Egyptian princess, was bathing in the Nile when she discovered the baby. Shocked, she drew him out the river, naming him Moses, which means to draw out-- foreshadowing how God would draw out God's people through Moses later in the story. Breathless, Miriam asks the princess if she could find a Hebrew woman to nurse the child. Miriam brings her mother to the princess. After a couple of years, Moses was returned to the princess, his adopted mother.

Why did the princess defy her own father? Because he was cruel? Why did the midwives disobey? Those who stand up to power and do what is right even as their own safety is threatened: whom do they serve? The God of justice and mercy, who works behind the scenes through the lives of faithful followers, and sometimes through the lives of those without faith. Or sometimes through the lives of people whose faith or nationality is different from those served; remember, the midwives' citizenry is ambiguous. The God who raise the poor from the dust and raises the needy from the ash heap does so through the eyes, ears, hearts and hands of anyone willing to deny the unjust authority of the oppressor.

When God acts faithfully, how does one respond? With joy and celebration. After one of the most iconic scenes of the Bible, the deliverance of God's people across the parted Red Sea, it was Miriam who led the singing. The same Miriam who as the big sister watched over her infant brother from the shore of the Nile. In one of the oldest poems of the scripture, Miriam picks up a tambourine and celebrates:

‘I will sing to the Lord, for he has triumphed gloriously;

horse and rider he has thrown into the sea.

and he has become my salvation;

this is my God, and I will praise him,

my father’s God, and I will exalt him.

The Lord is a warrior;

the Lord is his name."

The entire song is found in Exodus 15:1-21; the way the narrator bookends the singing makes it seem like this Moses' song, and Miriam's is only at the end, but this is the Song of Miriam. It is the song of faithful women in every time and place who stand up to the powers that be and act for justice and peace, not violence and war. Biblical scholar Dr Cheryl Exum has said, "The courage of women is the beginning of liberation."

Puah, name of one of the Hebrew midwives, means "splendid." The splendid Wonder Women of the Exodus allowed God's victory to happen because they were not afraid. What justice, what victory, does God have in mind for our world today if faithful people will lay aside their fear and do what is right in the face of what is wrong?

This question is the legacy of Dr Martin Luther King, Jr. Over the next couple of days, on social media we will see quotations from Dr King. My all time favorite, for the record, is "Injustice anywhere is a threat to justice everywhere." But if Dr King's enduring witness has become a meme for people to share on Facebook while turning away from the suffering of others, then his legacy is irrelevant. We have to be the Puahs, the Shiphrahs, the Miriams, the mothers of cast away infants, and the daughters of Pharaoh, who say NO to injustice anywhere, so that justice everywhere is preserved. And when God shows up to deliver God's people to freedom, we have to pick up our tambourines and lead the singing! In the name of the Father, the Son, and the Holy Spirit, Amen.

As a tribute to Dr King and the call to action we've just heard,  I asked Laura and Dan Dominick to share special music this morning: I Have a Dream.
Email Post