Any Twilight Zone fans here? I am a huge fan. On just about every top 10 Twilight Zone episodes you'll find the one with this guy: 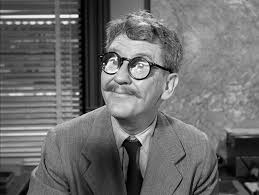 This is Henry Bemis, portrayed by the late Burgess Meredith. The episode is called "Time Enough At Last." It was the eighth episode, and aired Nov 20, 1959. It's the story of a bank teller who loves to read. He has books stashed everywhere: at work, at home. Whenever he has an extra second to himself he is reading Oliver Twist or something else. But there are always commitments to get in the way of his reading. Customers at the bank. Dinner parties with his wife.

Then one day, as Henry Bemis is reading in the bank vault during his lunch break, a nuclear bomb explodes over his town. And he is the only survivor. Initially he grieves for his wife and the rest of humanity, until he stumbles in to the town library. He realizes: no more waiting in line. No more restrictions on how long to keep a book. No more rules or commitments of any kind. It's just Henry Bemis and every book every written. With each passing second, he accepts his new life with joy.

We're continuing our Weird Bible sermon series today, sharing strange Bible stories the youth group encountered on their recent trip to Youth2019. Today we're looking at the Noah story; specifically the story after the Flood. What happened next?

Noah, we are told, was a righteous man. So much so that when God decided to destroy all of humanity and do a system reset with one family, God chose Noah. We are not told anything about Noah's behavior or belief system that might make him more special than anyone else.  "I'm done with humanity and all its sinfulness," God says, "So I'm going to drown every living thing-- including the animals-- and start over with you. Get to work building a giant boat. Here are the blueprints." Unlike Abraham later in Genesis and Moses in Exodus, Noah does not object  to God's mission that will kill innocent people. He gets to work. You've probably seen a sign like this: 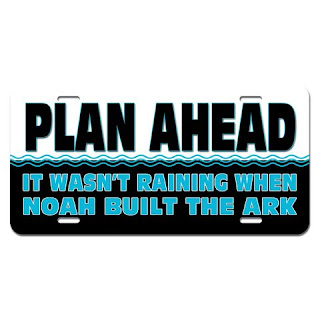 So Noah built the ark, closed up his family and representatives of all the animals on board, and God shut the door. After forty days, the ark settled, and when it was safe, Noah and everyone else disembarked.

Noah's first act was to build an altar and worship. Then he planted a garden. If it was God's intention to re-start from Genesis 2, that's pretty much what happens. Like Adam and Eve, Noah is charged to be fruitful and multiply, fill the earth with his descendants, and till and subdue the land. He does all of this. One of his very first agricultural activities is to grow the world's first vineyard. He picks the world's first grapes, mashes them, allows them to ferment, fills up a cup to the brim, and repeats those actions over and over again. Noah becomes the first person to open a winery, and becomes his best customer. He drinks so much that he passes out and exposes himself in his tent.

One of his sons, Ham, sees his father's nakedness and tells his other brothers. Those two, Shem and Japheth, enter the tent, find Dad's old, torn up bathrobe, stretch it out, and walk backwards to cover up Noah, so as not to see his nakedness. When Noah wakes up and learns what has happened, he is embarrassed and ashamed. In an act of rage that would have implications for humanity for millennia to come, Noah curses his grandson Canaan, not Ham himself, saying "Cursed be Canaan. His descendants will be Shem's servants/slaves forever." The cursing of Canaan was most likely inserted to justify Israel's occupation of the land of Canaan and its people. American slave owners, believing everyone living in Africa was somehow related to Ham, justified the horror of slavery based on this interpretation, among other scriptures.

We learned earlier that God believed Noah was righteous. Maybe before the Flood he was ok, but after he is at best a C-, and that assumes every other human being was a D or an F. Maybe his grief over the loss of life-- human and animal-- was too much for him. Maybe he found comfort and solace in drinking. But a life without reflection or limits will destroy anyone, and Noah is broken. If the Flood was meant to change the character of humanity, it failed.

After the trauma of those pages in Genesis, Noah retreats into himself, becoming selfish and self-absorbed. Not only does he have no outlet for his own grief and anguish, but he offers nothing for his family. In fact, the only words Noah is recorded speaking to anyone are the words cursing his grandson for generations to come.

There is a difference between shame and guilt. Guilt is how we feel about things we have done: I have done bad things. Shame is how we feel about ourselves: I am a terrible person. Noah is overcome by the shame of his drunkenness and exposing himself. Remember, this entire episode is meant to be a re-framing of Genesis 2 & 3. What is the first thing Eve and Adam learn after they eat of the Tree of Knowledge of Good and Evil? They are naked. They hide from God. They feel exposed. That's how Noah feels the morning after his binging. Exposed.

For God's part, after the Flood God promises to never destroy humanity by enormous amounts of water. The Flood fundamentally changes the relationship between God and the creation-- especially humanity. God creates a covenant relationship, where connection is a two-way street. It's the first biblical covenant. After the Flood, biblical characters like Abraham, Moses, Job, and the Hebrew prophets, openly challenge God when they believe God has acted unjustly. They can do this because of the covenant relationship; God is accountable to humanity as much as humanity is accountable to God. The rainbow is God's reminder of the covenant. What did the rainbow conjure up for Noah? We have no idea. In fact, throughout God's soliloquy about this new covenant that changes everything, Noah is painfully silent.

Remember Henry Bemis? The bomb goes off, he discovers there is no one left to inconvenience him, he is now free to do whatever he wants. "Time Enough At Last." He gathers a giant pile of books, loses his balance, his comically-thick glasses fall and break. And now Henry Bemis is truly alone in the world. And he weeps. Exposed.

Too often religion is reduced to rule following. Noah is considered righteous because he is a rule follower deluxe. Head down, hammer in hand, noise-cancelling earphones firmly in place when the rain begins to fall and people outside of the ark bang on the door. Religion isn't about rule following; it's about establishing a community of love and grace. Noah is separated from that possibility by the ark's door. After the waters recede he separates himself even from his family, shutting himself in his tent with only his despair, his wine, and his nakedness. When his selfishness is exposed he doesn't repent or ask God to draw nearer. He lashes out and curses future generations of his own family.

There is good news in all of this grief and anguish. Last month, James and I were driving through Paris, TX and stopped for lunch. We drove past First United Methodist Church. The marquee sign out front said, "No perfect people allowed," or something like that. Noah may have been righteous, but he was far from perfect, as we all are. And yet God saw fit to begin again. The covenant creates boundaries for human and divine behavior, but it also creates possibilities for both. If we invest in our relationship with God, we will find comfort and healing in the midst of despair. God will show up. If we invest in people, even if God seems absent people will show up, and embody God's love. We do not have to live by ourselves in our loneliness, guilt, or shame.

The psalmist knew something of shame, and called upon God to heal the brokenness. Unlike Noah, the psalmist has an honest, fruitful relationship with God and the human family. Even in times of anguish, the psalmist clings to God:

do not let me be put to shame;

do not let my enemies exult over me.

Do not let those who wait for you be put to shame;

let them be ashamed who are wantonly treacherous.

Make me to know your ways, O Lord;

teach me your paths.

Lead me in your truth, and teach me,

for you are the God of my salvation;

for you I wait all day long.

Turn to me and be gracious to me,

for I am lonely and afflicted.

Relieve the troubles of my heart,

and bring me out of my distress.

Consider my affliction and my trouble,

and forgive all my sins.

Consider how many are my foes,

and with what violent hatred they hate me.

O guard my life, and deliver me;

do not let me be put to shame, for I take refuge in you.

May integrity and uprightness preserve me,

for I wait for you.